MEP Elmar Brok: "Giving it back to the EU Council is against the citizens, against European federalism." [European People's Party/Flickr]

Brok, who is a close ally of Chancellor Angela Merkel, said Macron was pushing to have the transnational lists for EU-wide elections, which according to Brok undermines the legitimacy of the European Parliament, but at the same time opposes giving the people the “real power” through the Spitzenkandidaten process.

“With this behaviour, Macron wants to weaken the European Parliament,” Brok told EURACTIV.

Brok said the French President wants to take the election of the Commission President away from the Parliament and have it “behind closed doors” in the European Council again.

“Giving it back to the European Council is against the citizens, against European federalism,” the German MEP warned.

The Spitzenkandidaten process was first used in the 2014 election, when Commission President Jean-Claude Juncker was elected.

But, the EU Treaty does not make any reference to the Spitzenkandidaten procedure. In 2014, it was used following a “gentlemen’s agreement” among EU leaders. However, German Chancellor Angela Merkel had initially expressed concerns.

This time, ahead of the 2019 election, a number of member states, including Macron’s France, have opposed the process.

Macron’s progressive movement does not belong to any political family in the European Parliament and analysts explain that this is a reason he opposes the Spitzenkandidaten procedure, which favours the party with the largest majority.

On the other hand, the German right-wing parties control the EU Parliament, and through this process, can eventually influence the election of the future president of the EU executive.

Instead, Macron has been in favour of the ‘transnational lists’. In an effort to halt rising Euroscepticism and strengthen the sense of EU citizenship, Macron stressed that the 73 empty seats following the Brexit, should go to EU-wide constituencies.

The proposal was supported by the socialists and the liberals in the EU House but was ultimately rejected due to the EPP stance, which called it “irresponsible”.

Brok, who is also president of the Union of European Federalists, campaigned against the transnational lists, a long-standing request of the federalist movement. Some members of UEF reacted strongly asking for his resignation.

“Because I am a federalist, I am against the transnational lists,” Brok said, adding that this proposal is against any legitimisation of the EU Parliament.

“During my entire life, I have been a federalist, since I was 12 years old. I’ve always said that transnational lists are against federalism. In no federal state in the world, one can find transnational lists. Neither in the US nor in Germany and Switzerland.”

According to Brok, the members of the Parliament should be accountable to EU citizens and get their approval.

“I am in favour of an election system in which the citizens and the members of the European Parliament are as close as possible. Our main problem is that the Parliament is far away from citizens and with transnational lists, this gap will be widened,” he emphasised.

The MEP said that in order to have a real European debate in the EU election we needed to have a candidate for the presidency of the European Commission.

“We need to grant EU citizens the right to decide for the future of the European government.”

Referring to the Brexit negotiation, he noted it becomes “more and more difficult”.

“Because we do not know yet the details, the will and the position of the British government. I hope now that the Commission has proposed a draft text of the Withdrawal Agreement, that they can sit down and negotiate on this, article by article.”

He said that a solution should be found until October including the conditions for the transition period, which is needed in order to “have enough time to come to a future agreement, a free trade deal or whatsoever, in the time afterward”.

Asked about Juncker’s recent statement that 2025 could be a possible date for some of the Western Balkan countries to join the EU, Brok said the executive had already pointed out that every country could hope for membership on its own merits.

He noted that 2025 could be a date but they may not reach it if they have not made the proper reforms in the internal market, fighting corruption, rule of law and democracy.

“I hope they will manage.” 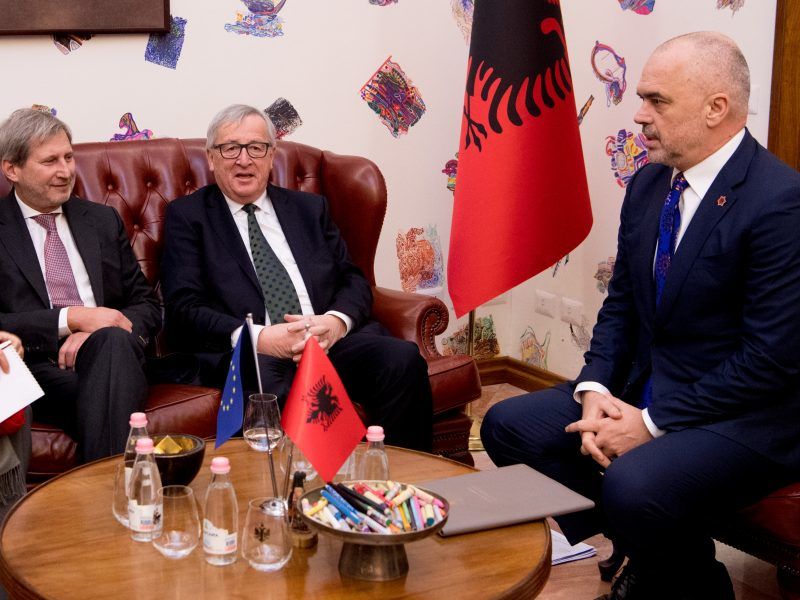 On the long-standing name dispute between Skopje and Greece, he noted that this time there was a possibility of a solution.

“We are in a better situation than we were some years before, but it would be helpful for the Skopje government to understand that they have to tell Greece clearly that there is no irredentism.”

The Greek government has repeatedly asked the former Yugoslav Republic of Macedonia (FYROM) to amend the articles of its constitution of irredentism nature to ensure it has no claims on Greek territory.

But in an interview with the Financial Times on 28 February, Fyrom’s Prime Minister Zoran Zaev said Greece’s claims are “unreasonable”.

“Now the new requirement from Greece is that we need to change our constitution. But a constitution is a home rulebook. It doesn’t have implications outside the country. In any case, changing the constitution wouldn’t be a final guarantee, because a new government in the future could just change the constitution back again.”

Brok warned that the government in Skopje should make it clear that that none in the political community want to believe that parts of Greece should be part of Macedonia, which is the “root cause of the problem”.

Asked whether a change in the constitution is needed, he replied, “I think yes”.

“Would you agree to let a country join the EU if it wants to take over half of your country?” the German politician said.

“The EU is about that we accept the frontiers as they are, make these frontiers less problematic and open them more and more, but not change frontiers. That is one of the main reasons of European unification,” he concluded.