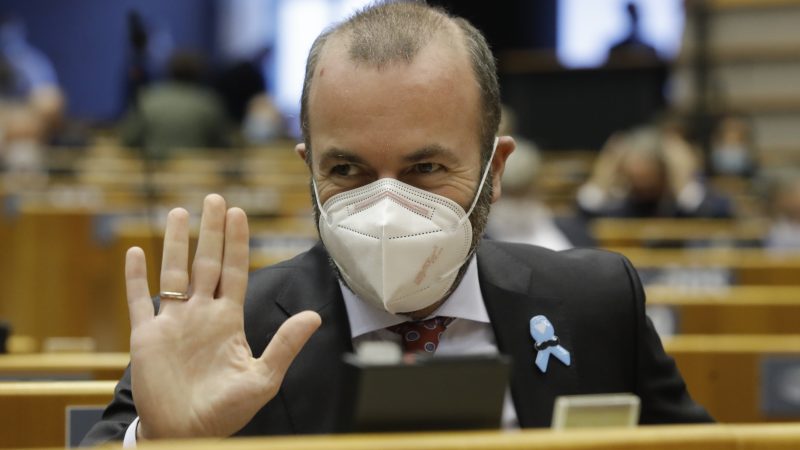 Manfred Weber, the leader of the EPP group, warns against assuming that the transfer of competences to Brussels will always be in line with one's own party-political values. [EPA-EFE/OLIVIER HOSLET]

Germany’s new three-party government will have to back key EU reforms even if these do not align with its values. According to EPP chairman Manfred Weber, the issue of arms exports, in particular, will likely be controversial. EURACTIV Germany reports.

The “traffic light” coalition of the Social Democrats (SPD), the Greens, and the business-friendly FDP has been clear it will focus on the European project by committing to the Conference on the Future of Europe and majority decisions in common security and foreign policy.

But this would mean shifting competencies from Berlin to Brussels, the chairman of European People’s Party (EPP), Manfred Weber, explained in Berlin on Monday (29 November).

This also applies to arms exports, “which today are decided in Berlin,” but where in future “Brussels could decide what arms we sell in the world,” he told EURACTIV. As arms exports are a controversial issue, especially for the Greens, they “still have a way to go,” he added.

Weber was pegged to become European Commission president in 2019 as the leading candidate of Europe’s largest political group, the European People’s Party, but failed at the time due to opposition, particularly from France.

Weber, a convinced European and part of the Executive Board of the Conference on the Future of Europe (CoFoE), warned that European integration could not be pursued solely for party reasons.

While strengthened decision-making in Brussels on issues like health is not up for debate, there is one point where it really matters: “namely the issue of defence,” he continued.

The Conference on the Future of Europe, which, according to the coalition agreement, should result in “a constitutional convention and lead to the further development of a federal European state”, was hampered by the COVID-19 pandemic.

It was initially scheduled for when Germany took over the EU Council presidency for six months in the second half of 2020 but was delayed by a year due to the pandemic.

Although the constituent plenary of the conference was held in June this year without any major problems, the second plenary has already attracted criticism.

“The first three rows should be VIPs or guests, not many of whom are here,” said Mark Plesko, representative of the Slovenian Civic Forum, in October, adding that the lack of high-level interest in the conference “is an excellent metaphor for the European Union.”

“I just ask for your understanding that it is not possible to be fully present in the plenary. I understand the impression that, unfortunately, there has been an incongruity,” he added.

EPP colleague and the EU Parliament’s representative in the conference, MEP Hildegard Bentele, said she “could not attend because I had caught a cold during the plenary session,” meaning she was absent for both days, but had watched online, she added.

With COVID-19 cases rising across the European continent and the Omicron variant spreading, it seems doubtful whether the next planned plenary session can be held in person.

“Everything now depends on the further development of COVID-19; if the variants of the virus become more challenging, then it will shake up Europe’s political agenda again,” Weber explained.

However, digital formats would allow the conference to move forward nonetheless. “I still advocate that we have to move to online formats,” Weber said.

“We must not lose any more time now in these debates about the future,” because the rest of the world is not waiting, he added.