A float caricaturing a Jew during the Aalst Carnaval parade in Aalst, Belgium, 23 February 2020. [Stephanie Lecocq/EPA/EFE]

The European Commission on Monday (24 February) slammed a Belgian street parade for featuring anti-Semitic floats that it said were “incompatible” with EU values.

The Aalst carnival, a centuries-old event in central Belgium long known for mocking public figures, has in recent years been accused of parading insulting and derogatory depictions of Jews.

Last year it lost its place on a UNESCO heritage list because of anti-Semitism.

On Sunday, the parade included caricatures of Jews with hooked noses, obsessed with money and dressed up like insects.

Belgian PM Sophie Wilmès responded to the criticism on Sunday, saying the government “is sensitive to the reactions to certain floats and carnival costumes” at the Aalst Carnival edition. 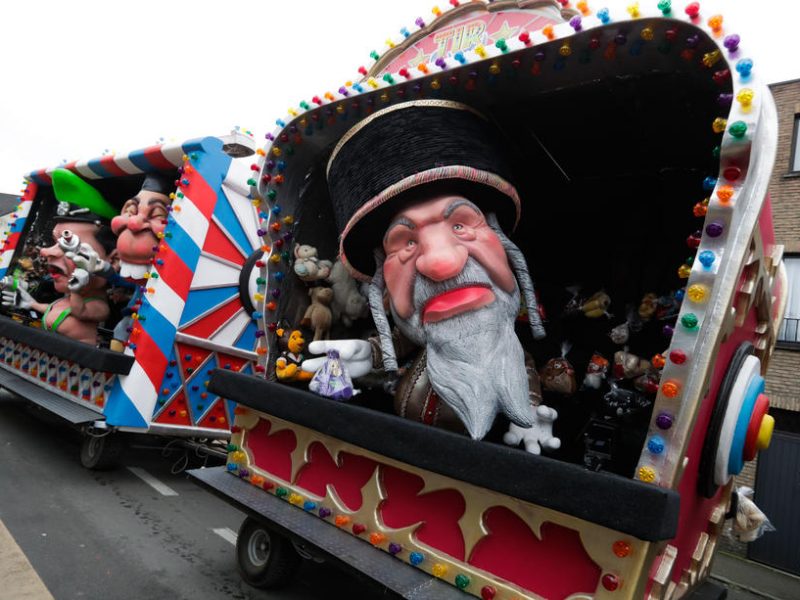 A year after sparking controversy and a wave of international protests over anti-Semitism, the Aalst Carnival organisers brought back anti-Semitic caricatures to the annual parade. For the first time, Belgium’s prime minister stepped into the debate and asked legal institutions to determine if the laws had been broken.

“It should indeed be self-evident that such images as what we’ve seen should not parade European streets, 75 years after the Shoah,” a Commission spokesman, Adalbert Jahnz, told journalists.

He said the European Union executive had received “a number of complaints” over the Aalst event, but that it was up to Belgian national authorities to take action.

As far as the European Commission was concerned, Jahnz said, “we stand firmly against all forms of anti-Semitism” and view the parade’s floats as “incompatible with the values and principles in which the EU is founded”.

“It needs to stop. No place for this in Europe,” Schinas wrote on Twitter.

This is what I said last year (5.3.19) on behalf of the @EU_Commission. This year as Vice-President also in charge of fighting #Antisemitism, it’s clear to me: The #aalstcarnival is a shame. It needs to stop. No place for this in Europe. https://t.co/uBHEmLaWTg

The carnival attracts tens of thousands of people over the three days leading to the Catholic holiday of Ash Wednesday and the start of Lent. It takes pride in its provocative, no-holds-barred approach.

Aalst mayor Christoph D’Haese defended the event, insisting it was not anti-Semitic.

He said it was important to take the “overall context” into account, comparing the parade to a “ritual of reversal” in which over three days “the poor become rich, the rich poor, men become women and women become men”.

“Here we laugh at everything — the royal family, Brexit, local and national politics and every religion — Islam, Judaism and Catholicism,” he said.

A float depicting puppets of hook-nosed orthodox Jews with rats sitting on money bags at the 2019 carnival caused uproar and led to UNESCO withdrawing it from its “intangible cultural heritage” list.

But carnival-goers interviewed by AFP on Sunday were unrepentant, with one who refused to be named saying the controversy was “completely exaggerated”.

Another, doctor Guy Verhuslt, said it was a shame that “Jews don’t have a sense of humour”.

Others wore muzzles to protest against what they called “politically correct censorship”, while UNESCO’s decision attracted mockery, with floats casting the UN cultural agency as a snooping, vengeful “Big Brother”.