European Union negotiators dismiss as “fantasy” some main British demands for Brexit, including on the sensitive issue of the Northern Ireland border, a senior EU official said on Thursday (24 May).

The official accused London of failing to accept that Brexit will necessarily distance it from the EU.

The broadside followed three days of talks with British negotiators in Brussels and comes a month before a summit where Prime Minister Theresa May hopes to defuse the Irish issue.

British demands to continue participating in the EU’s easy criminal extradition system or in the most high-security parts of the Galileo satellite programme were unacceptable to other member states since May rejects EU legal supervision.

British proposals to avoid a hard land border with EU member Ireland, complete with customs and other checks, were also firmly rejected by Brussels, in part because London was coupling them with a bid to also secure better “backdoor” access for the rest of the United Kingdom to the EU’s single market.

In uncompromising language indicating wide gaps just five months before a target date for a treaty to ensure a smooth Brexit in March, the official said of the Irish issue: “Progress so far seems elusive and substantive progress even more so.”

Talks on a framework for future relations also made little advance, with Britain rejecting a simple free trade pact and the EU refusing London’s offer of mutual recognition of each other’s regulations. But a status-quo transition period through 2020 means those are less pressing than the need for an Irish border deal which both sides want as part of a pre-withdrawal treaty.

In December, a provisional draft included language, rejected by May, for a “backstop” under which Northern Ireland would if need be remain aligned with EU economic rules. 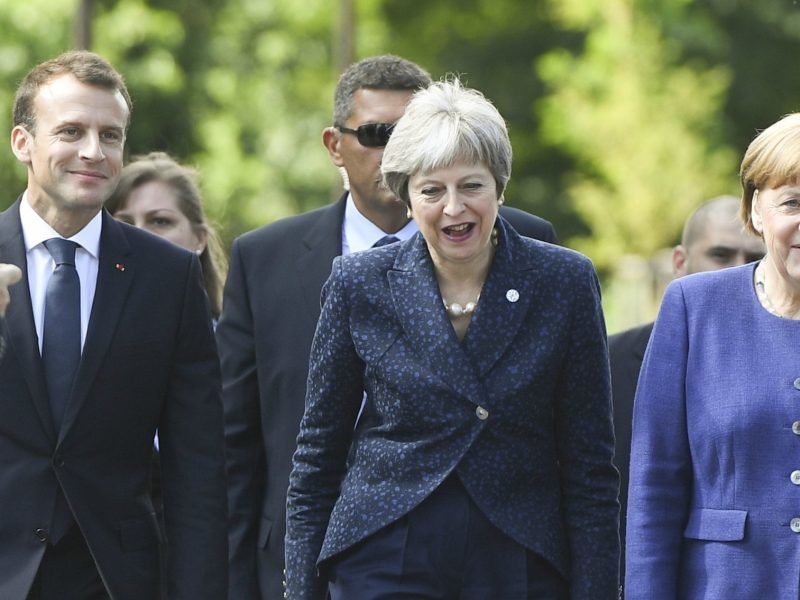 Prime Minister Theresa May said on Thursday (17 May) Britain would leave the EU customs union after Brexit but a source said London was considering a backstop plan that would apply the bloc’s external tariffs beyond December 2020.

Dependent for her majority on Northern Irish allies opposed to new barriers between the province and the British mainland, May has suggested making the backstop time-limited and that it may see the whole United Kingdom apply EU customs rules .

But the EU official dismissed that, saying that a deadline for ending the backstop would make it pointless – effectively just delaying a possible introduction of a hard border that could inflame sectarian violence – and said London must stop seeking a solution that would greatly benefit mainland firms.

“We need to have the recognition that the backstop has to be Northern Ireland-specific,” the official said. “We need to do away with the fantasy that there is an all-UK solution to that.”

EU negotiators regard proposals to keep the British mainland aligned to EU regulations as a “back door” to keep access to the single market. They may be flexible at the modest scale of Ireland but not for the second biggest economy in Europe.

The official said Britain had promised a new proposal on the Irish issue and Brussels hoped to have them early next month.

Behind the scenes and political cover of a huge row over Galileo, the government is preparing a big #Brexit U-turnhttps://t.co/3Z1tHM9LI0

Saying that a consequence of full British involvement in Galileo would be that London might be able to block the EU’s own access to satellites in a dispute, the official denied however that such arguments betrayed a deep lack of trust.

Any future relationship would rely on trust, the official said, but Britain could not expect the same treatment as member states subject to stricter EU oversight.

Reflecting a sour tone, however, the official also told reporters that British negotiators said they would use their place inside the EU for the remaining 10 months to try in budget discussions to alter rules for access to non-member states.

Britain’s finance minister Philip Hammond hit back at suggestions it was up to London to deal with its own decision to leave the EU: “I fear many EU opinion-formers … see the Brexit challenge as simply one for the UK to resolve,” he told a business conference. “This has to be a two-way conversation.”