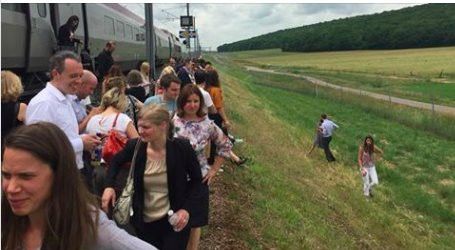 After being stuck one hour in the train, MEPs were released in the fields. [@DaveKeating Twitter]

Hundreds of European lawmakers and officials were left stranded for hours on Monday when an electrical fault halted their train to the EU parliament in the eastern French city of Strasbourg.

The train that takes MEPs to Strasbourg from their other base in the EU headquarters in the Belgian capital of Brussels has been dubbed the “gravy train” by critics due to the costs of switching between the two.

The chartered Thalys train that shuttles MEPs and their staff from Brussels to the European Parliament in Strasbourg has been stuck in the French countryside for three hours after train lost power.

After an hour stuck inside the heat, they released the MEPs out into the fields. pic.twitter.com/Ur6NU8ck55

British MEP Catherine Bearder said the four-hour breakdown train shone a light on the “mad trip to Strasbourg” that she and her colleagues have to make every month.

“Only upside of today has been shining a light on the ridiculous fact we go to Strasbourg. MEPs don’t want it, citizens don’t want it but the French government have a veto,” she said on Twitter.

Only upside of today has been shining a light on the ridiculous fact we go to Strasbourg. MEPs don't want it, citizens don't want it but the French government have a veto. Il est temps de changer? @EmmanuelMacron pic.twitter.com/ebFcGHSoMu

Bearder complained that there was “no air conditioning, no water, no food left”, and added: “Don’t ask about the loos (toilets).”

The European Parliament’s deputy spokeswoman, Marjory van de Broeke, tweeted pictures of officials standing in a field by the train under a stormy sky after they were briefly allowed off to get some air.

Operator Thalys said there was a 240-minute delay overall to the service including the time taken to transfer passengers to a new diesel train.

The incident comes after German Chancellor Angela Merkel recently called for an end to the system of parliament having bases in both Strasbourg and Brussels.

Angela #Merkel is proposing single seat for the @Europarl_EN at @EPP-summit in Munich. https://t.co/FSVXz7FA4M

“I think the European Parliament should concentrate its work on one site. I know what problems I am causing with France and Luxembourg (the other country which hosts EU institutions) but I think that in the long term it doesn’t help its ability to act,” she said.

France has jealousy defended Strasbourg’s status as a host for the parliament.

We continue working for a #singleseat for the European Parliament that is more efficient, more sustainable and closer to the EU citizens. #ambitiouseuropehttps://t.co/HIPYvloqkI @EURACTIV