Austrian conservatives led by Sebastian Kurz reached a coalition deal with the anti-immigration Freedom Party (FPÖ) on Friday, paving the way for Austria to become the only western European country with a far-right party in government.

The new government is due to be sworn in by Austria’s president Alexander Van der Bellen on Monday at 11 am.

When in 2000, the FPÖ led by Jörg Haider entered government with the ÖVP, the other 14 EU members imposed sanctions on Austria by freezing bilateral relations with the alpine country. No contacts or ambassadorial meetings at an intergovernmental level were held and Austrian candidates were not supported when EU international offices were assigned.

This time however, EU leaders are looking the other way. Former UKIP leader Nigel Farage tweeted “It’s now the same situation as in 2000 and no one says a word. Eurosceptic politics is now mainstream.”

In 2000 I sat in a European Parliament that wanted sanctions on #Austria because the Freedom Party was in coalition government. It’s now the same situation in 2017 and no one says a word. Eurosceptic politics is now mainstream.

Kurz’s party won the 15 October election with a hard line on immigration that often overlapped with the Freedom Party’s. The FPÖ came third with 26% of the vote. 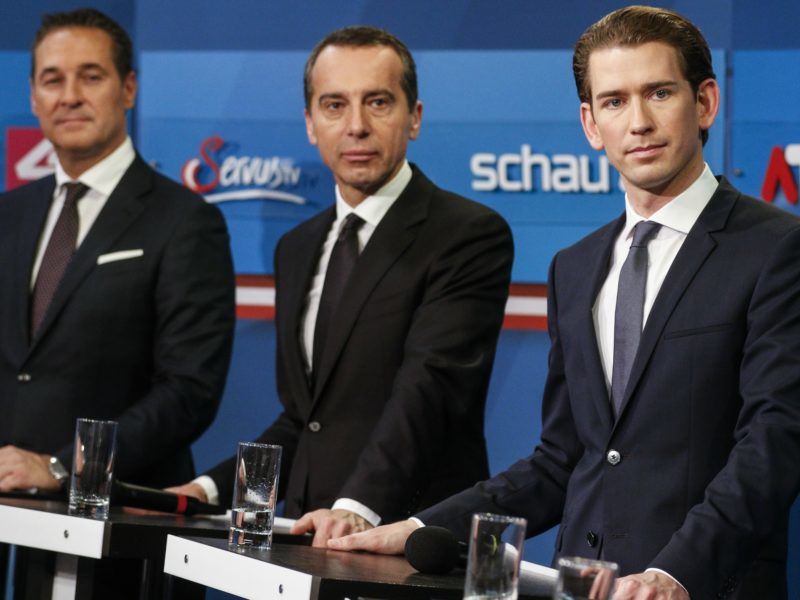 “We can inform you that there is a turquoise-blue agreement,” Kurz said in a joint statement to reporters with FPÖ leader Heinz-Christian Strache, referring to their two parties by their colours.

“We want to reduce the burden on taxpayers … and above all we want to ensure greater security in our country, including through the fight against illegal immigration,” Kurz said, touching on core issues for both parties.

In 2015, when more than a million refugees and other migrants arrived in Europe, Austria took in more than 1% of its population in asylum seekers, one of the highest rates in the EU. Many voters felt their country was overrun, and both parties have pledged to prevent a repeat of that influx.

Strache and Kurz have pledged to restrict new arrivals’ access to many social services for their first five years in the country, and to provide recognised refugees with only a “light” version of regular benefits for five years.

While other far right parties in Europe have gained ground this year, entering parliament in Germany and making France’s presidential run-off, the Freedom Party is going further by entering government and securing key posts, including the Interior, Foreign and Defence Ministries. Strache will hold the position of vice-chancellor.

ÖVP ministries will include finance, economy and justice.

Unlike France’s National Front, the FPÖ has backed away from calling for a referendum on the EU. In an early policy pronouncement, Kurz, the future chancellor, said the new government would not hold a referendum on European Union membership.

Kurz has sought to head off potential criticism by offering assurances that his government will be pro-European. He also plans to shift responsibility for some EU issues from the Foreign Ministry to his office, a person familiar with the talks said, giving him greater control over EU policy.

Austria will hold the rotating presidency of the Council of the EU from 1 July 2018. Despite the FPÖ’s historical ambivalence towards the European Union, the coalition “commits to Europe” but will act to “steer the EU back in the right direction towards its fundamental ideas”.

During its presidency Austria will “take a leading role in correcting some of the erroneous developments” of the bloc, including “strengthening the idea of subsidiarity”.

During its presidency it will hold a summit on immigration.

It also wants to contribute to an improvement of relations between the West and Russia and says Vienna will not agree to Turkey joining the EU.

Regarding Turkey, this is hardly a change of position, as outgoing social-democrat Chancellor Christian Kern has also pleaded for an end to accession talks with Ankara.

The coalition programme calls for a halt to “illegal immigration” and to speed up the asylum process to deport those who are not accepted. Asylum is “temporary protection” only.

Those “refusing to integrate must expect sanctions” and “parallel societies” must be prevented.

There will also be a stop to “immigration into the social system”. Monthly payments to those with asylum and subsidiary protection will be cut to €365 plus an “integration bonus” of €155. Currently benefits stand at just under €840 per month.

“We want to protect our homeland Austria as a liveable place with all its cultural assets. This includes deciding for ourselves who can immigrate and live with us and ending illegal immigration,” the document says.

The coalition also wants a “slimmer state” and a “brake on bureaucracy”, with the aim of cutting state expenditure by several billion euros. Lawmakers will see their salaries frozen.

Austria, the programme says, is the “world champion when it comes to regulation and limiting freedom and personal responsibility”. It no longer has the lowest unemployment rate in the EU.

Looser labour laws will see workers be able to work up to 12 hours a day in what the parties say is a “win-win” for employees and employers.

There is also a pledge that there will no new taxes and that the proportion of taxes and other charges taken off salaries will be cut “towards” 40% from 43%.