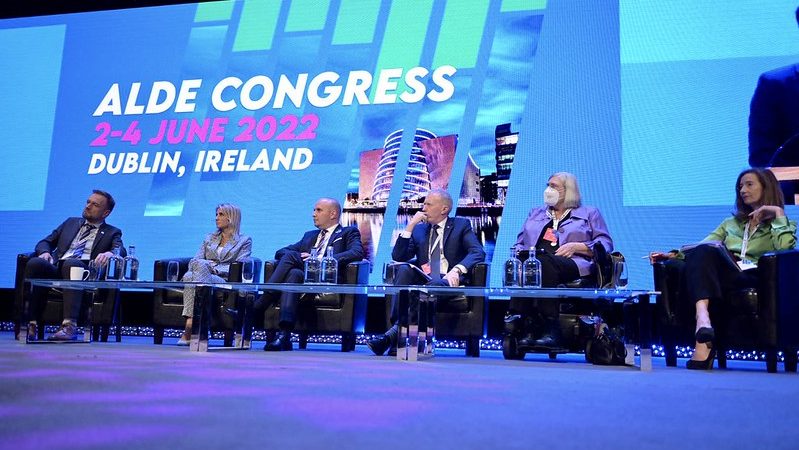 Ukrainian president Volodymyr Zelenskyy has secured another boost to his EU aspirations after his party was approved as a member of the European liberal party on Thursday (2 June). ALDE party

Ukrainian president Volodymyr Zelenskyy has secured another boost to his EU aspirations after his party was approved as a member of the European liberal party on Thursday (2 June).

Servant of the People (Слуга народу/Sluga Narodu), the party founded by Zelenskyy in late 2017, became a full member of the Alliance of Liberals and Democrats for Europe following the approval of party delegates at their annual congress in Dublin.

In a statement, the party also congratulated Croatia’s Centar and the Portuguese party Iniciativa Liberal for obtaining unanimous approval from its governing council.

Although relations between the Ukrainian president and French counterpart Emmanuel Macron, whose La Republique en Marche is the biggest party in the ALDE family, have been strained in recent weeks, EURACTIV understands that Macron’s party backed the membership bid.

The move was not unexpected. ALDE has been courting Servant of the People, which secured a majority in the Ukrainian parliament at the 2019 elections, for some time.

Zelenskyy’s party was granted temporary affiliate status of the liberal party on 28 February, just days after Russian forces began their invasion of Ukraine. ‘This did not come out of nowhere’, said one ALDE official.

Olena Shuliak, the leader of Servant of the People, and Deputy Prime Minister Olga Stefanishyna, also a member of the party, are among a sizable delegation in Dublin.

There are now five Ukrainian parties that are members of the European liberal alliance. Kira Rudik, the leader of the Holos party, currently in opposition, is expected to be elected as a Vice President of ALDE on Saturday.

Should Ukraine join the EU, ALDE parties would be well placed to obtain a large number of MEPs for the Renew Europe banner in the European Parliament.

Meanwhile, two parties from Georgia, whose government has also stepped up its efforts for the country to join the EU, Lelo 2020 and Girchi – More Freedom, were also confirmed as a full member party and temporary affiliate, respectively.

The European Commission is expected to present its opinion on the application of Ukraine, Moldova, and Georgia for EU candidate status on either the 8 or 15 June. However, the issue is controversial across much of the EU.

Zelenskyy has stated that his country does not “need alternatives to EU candidacy.”

“We do not need compromises,” Zelenskyy told reporters in Kyiv in May.

The liberal alliance is likely to adopt its own resolution on the EU Membership Candidate Status for Georgia, Ukraine, and Moldova on Saturday.