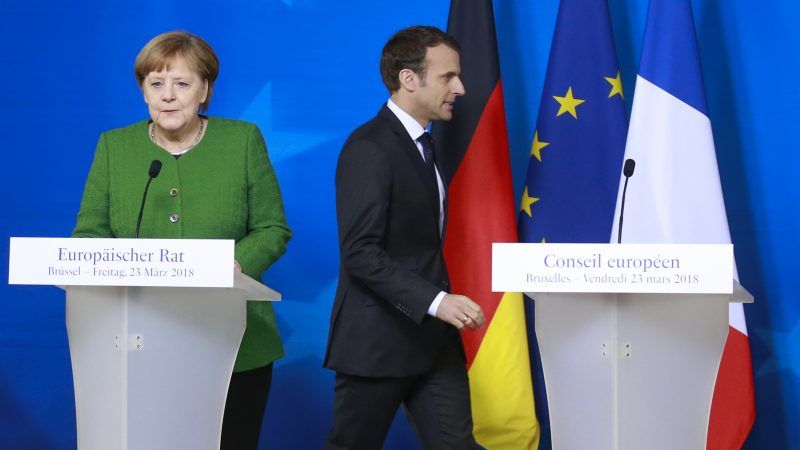 President Macron carefully selected his company when he entered the conference building in Brussels at the EU summit last week. On his left, Spain’s Prime Minister Mariano Rajoy, on his right the Portuguese Prime Minister Antonio Costa. The joint appearance of the three politicians from Paris, Madrid and Lisbon provided an indication that Macron wants to avoid one thing above all: to stand isolated in the EU.

Until just a few weeks ago, Macron had assumed that, together with German Chancellor Angela Merkel, he would present a common line for the planned reform of the Eurozone at the summit. But nothing came of it.

Apparently, Merkel wants to gain time until the decisive EU summit in late June, in which a decision on the further development of the Economic and Monetary Union is expected to be made. Reason: The new German government needs to learn the ropes.

While there is currently no great support for Macron’s project from Berlin, there is also headwind blowing from the other side: eight northern European states have grouped around the Netherlands and do not want to support Macron’s desire to transfer further powers to the EU.

Basically, the forthcoming reform of the Eurozone is about the question how the 19 member states with the single currency can prepare themselves against crises like the 2010 disaster in Greece.

Among other things, a joint European deposit insurance for financial institutions is being planned under the so-called banking union. The project is particularly controversial in Germany because savings banks and cooperative banks fear that German deposits could be used to stabilise distressed banks in southern Europe.

The ambitious Macron plans, which include an own budget for the Eurozone and an EU finance minister, go even further.

The fact that France’s head of state sought solidarity with the southern member states came as no surprise. His proposals for a renewal of the EU threaten to fall flat considering the current world situation: at the EU summit, the focus was less on the future of the Eurozone, but rather on how to deal with Russian President Vladimir Putin and US President Donald Trump.

In the Eurozone, Macron calls for “responsibility and solidarity”

Also at the joint Merkel-Macron press conference on Friday, the still smouldering trade dispute with the US, the consequences of the poison attack in Salisbury and the hostage-taking by a suspected IS supporter in southern France took centre stage.

Just before the Summit closed, upon request from Macron, a separate meeting of the 19 euro member states took place, which included talks about the banking union.

Merkel explained that further progress was needed on the banking union. The background: Berlin wants to see a further reduction in risks for the national financial institutions before it comes to deposit insurance.

Meanwhile, Macron was asked if he had made progress on his plan to set up an own budget for the Eurozone. He replied in an encoded way that “responsibility and solidarity of the eurozone” have to be redefined. “I am confident in regard to this topic,” he added. The EU summit in June will show how far Macron will come with his reform aspirations.