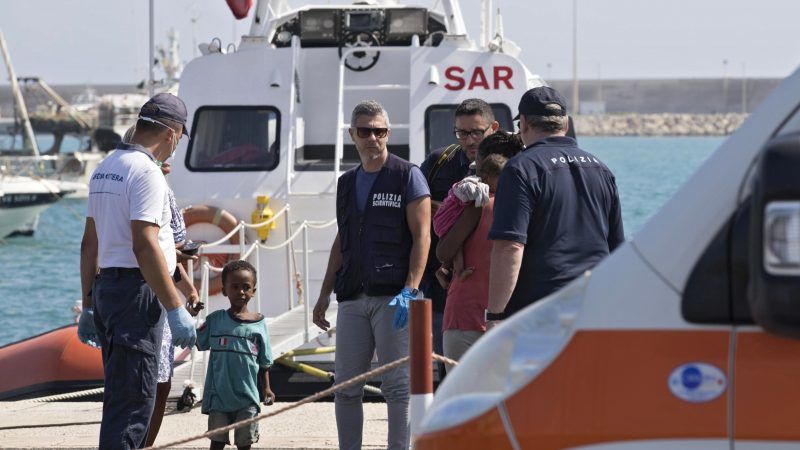 Migrants women and children are assisted by medical staff and law enforcement officers after they disembarked from an Italian Coast Guard ship in the port of Pozzallo (Sicily island), southern Italy, 15 July 2018. [Francesco Ruta/EPA/EFE]

“Even Spain and Portugal will take 50 migrants each, as France, Germany and Malta have already done,” Conte said in a tweet.

Despite the controversy over who would take the migrants, Conte authorised the disembarkation of all 43 women and 14 children on board.

The migrants were allowed to leave the two ships in the southern Sicilian port of Pozzallo, a report by the AGI agency said quoting sources close to the premier.

Earlier Sunday, Germany agreed with Italy to take in 50 migrants after Rome requested that its EU peers take some of the migrants stranded off the Italian coast.

A German government spokeswoman said in a statement that “Germany and Italy have agreed that, in view of the ongoing talks on intensified bilateral cooperation on asylum policy, Germany is ready to take in 50 people”.

Conte had contacted his 27 EU peers to remind them that they had agreed at their end-of-June summit on the need to share the migration burden.

He announced on Saturday that France and Malta would take 50 migrants each, and “other countries will follow very quickly”.

“This is the solidarity and responsibility we have always asked from Europe and now, after the results obtained at the last European Council, it is starting to become reality,” he said on Facebook Sunday.

“Let’s continue on this path with firmness and respect for human rights.”

Italy’s new populist government, which came to power on 1 June wants to block any further migrant arrivals by boat and has banned NGO rescue ships from docking in Italian ports, accusing them of aiding human traffickers.

The latest migrants, like thousands of others, had set sail from Libya in a single wooden vessel which was identified early Friday.

Eight women and children were taken to the Italian island of Lampedusa for medical treatment.

“Through the back door, France, Italy and Germany have placed controls on the borders because of the migration crisis,” Borrell told the El Pais newspaper.

Spanish rescuers separately saved more than 340 migrants from the Mediterranean on Saturday.