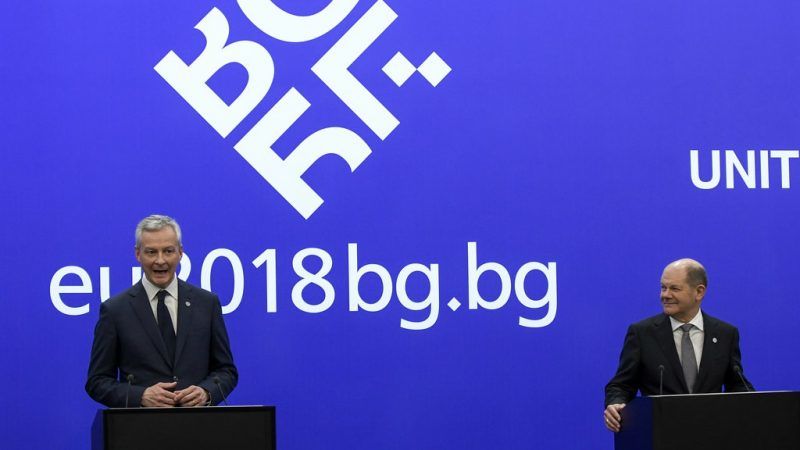 Germany and France on Saturday (28 April) pledged to deliver a joint proposal to reform the eurozone in time for a leaders summit in June, despite their big differences on the future of the bloc.

“We strongly believe that we should be able to find a compromise between France and Germany for the next council of June,” French Finance Minister Bruno Le Maire said at a joint press conference with his German counterpart Olaf Scholz.

“It is absolutely important that France and Germany agree on questions,” said Scholz as he confirmed the joint plan for reforms despite widespread talk that divisions between the EU powerhouses were too great.

#France FinMin Le Maire & #Germany FinMin Scholz say they're optimistic that the two countries can agree on #Eurozone reforms by end of May. https://t.co/zxYRCdSSjP #ESM #EcoFin

Le Maire “will visit me in Berlin and this will be a very hard working meeting,” the former mayor of Hamburg said after talks in the Bulgarian capital.

He added: “If you look at the schedule you see that (the meeting) is desperately needed to get this success in the end.”

Under the impetus of French President Emmanuel Macron, EU leaders have pledged to table a set of reforms at the summit in June that France says are necessary to reboot Europe after the setbacks of Brexit.

The renewed promise of a Franco-German plan comes despite resistance by Germany to follow through on Macron’s ideas amid resistance by political allies of German Chancellor Angela Merkel.

Eurozone finance ministers have for months discussed the proposals, but discussions have gone nowhere.

Macron’s grand ambitions for the single currency bloc have already been significantly watered down, with ideas for the creation of a eurozone finance minister or joint borrowing by member states dropped.

Instead officials are mainly focused on deepening the bloc’s banking union, with hopes to formally launch a European-wide deposit-insurance scheme that would be implemented over the long-term.

Negotiators are also trying to draw up a plan for an EU rainy day fund as well as aid to help countries adopt economic reforms.

“The truth is, we are starting to run out of time,” European Commission Vice President Valdis Dombrovskis said on Saturday, urging for compromise.

Banking Union: we are beginning to run out of time. It’s time to decide, need to find compromises, says @VDombrovskis. Hope for quick progress by June. @EU2018BG