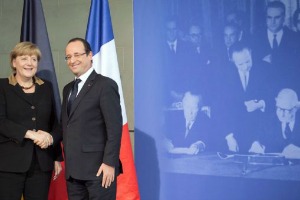 Meeting on the 50th anniversary of the Élysée Treaty sealing their post-war reconciliation, the leaders of Germany and France vowed yesterday (22 January) to bridge differences on the shape of Europe's currency union and unveil joint proposals on deeper integration within months.

Angela Merkel, a conservative, and François Hollande, a socialist, have had an uneasy relationship since the French president swept into office eight months ago vowing to reverse German-backed austerity policies designed to shore up the crisis-hit euro zone.

But the two leaders, born less than a month apart in the summer of 1954, stressed their common values and hailed the importance of the Franco-German partnership after centuries of conflict that culminated in two world wars and led historians to speak of a "hereditary enmity".

"The young people of our countries have the great fortune to have never known anything but peace and democracy," said Hollande, speaking in the Reichstag building in Berlin to a joint session of parliament.

But he added that the youth now faced "an economic and social crisis of unprecedented duration", requiring common efforts to boost economic output and create jobs.

Merkel, speaking earlier at a joint news conference with Hollande, said the leaders would tackle one of the most divisive issues between the two countries – deeper economic and fiscal integration – and present joint proposals before a summit of EU leaders scheduled for June.

She also said she would support a French candidate to run the new European bank supervision body that is to become operational next year, under the umbrella of the European Central Bank.

The three-year-old debt crisis that started in Greece and even threatened to envelop France at its peak has exposed structural deficiencies in Europe's grand currency experiment, forcing its members to consider closer cooperation.

But Berlin and Paris have starkly different visions of what a closer currency union should look like, with Merkel favouring tighter central controls over budgets and Hollande seeking more solidarity, in the form of a big euro zone budget to deal with economic shocks.

"It is about a deeper cooperation in economic policy with the goal of social security, employment, growth and financial stability," Merkel said of the joint proposals that are to be presented by May.

After six months of earnest handshakes, the two leaders now kiss each other on the cheek when they meet. At a dinner in the chancellery on Monday, they began using the familiar "du" and "tu" form with each other, according to aides.

Hollande pointed to the fiscal compact on budget discipline, a December deal on banking supervision and the agreement to keep Greece in the euro zone as fruits of his strong relationship with Merkel.

"It has not escaped you that we do not belong to the same political family. Despite that, if you look back at the past eight months, I'm very happy with what France and Germany have been able to accomplish to get the euro zone out of its crisis," the French leader said. "If you look at the results, it's clear we're on the same wavelength."

Merkel, who refused to meet with Hollande during last year's French election campaign while openly supporting his conservative opponent Nicolas Sarkozy, said: "It may be our best-kept secret that the chemistry actually works."

As part of the festivities to mark the anniversary, Merkel and Hollande answered questions for over an hour on Monday evening from some 200 French and German students. Later on Tuesday they will attend a concert at the Berlin Philharmonic.

In a joint declaration, they said they would encourage unions, employers and workers in their countries to establish joint working groups to make proposals on competitiveness.

The leaders also touched on France's military intervention in Mali, with Hollande thanking Merkel for offering political and material support, including the use of two transport planes to fly West African troops to the capital Bamako.

"We know this is a difficult military mission that France is undertaking at the moment for all of us," Merkel said.

EURACTIV France spoke to analysts who explained that the Élysée Treaty has put in place an elaborate mechanism for bilateral consultation and coordination.

"The big decisions at the top are only the tip of the iceberg. The strong intreweaving of the two administrations allowed the two countries to resolve their differences, "says Marion Gaillard, a lecturer at Sciences Po.

Following the disastrous negotiations of the Treaty of Nice in 2000, which exposed the rivalry between France and Germany on the European level, the process Blaesheim was put in place to provide regular informal meetings between the two leaders and created the Franco-German Council of Ministers.

Without a common line of action, these bodies allow the two countries to “get back on their feet gently, because pretty tough tensions can arise again” said Claire Demesmay, specializing in Franco-German relations for the DGAP think tank.

The Treaty of Friendship signed at the Élysée Palace in Paris in 1963 by Germany's Konrad Adenauer and France's Charles de Gaulle buried the hatchet almost two decades after World War Two ended.

Perhaps the most powerful image of reconciliation came in 1984 when Helmut Kohl and François Mitterrand - mentors of Merkel and Hollande - held each other by the hand at the site of the Battle of Verdun, where 700,000 of their countrymen died in World War One.

They went on to lay the foundations of Europe's economic and monetary union, a project that France hoped would harness German power after reunification in 1990.

The return of a French Socialist government under Hollande has led to tension between Paris and Berlin.

But after a brief flirt with Italy and Spain in mid-2012 that spawned talk of an anti-German southern bloc within Europe, Hollande has turned back to Berlin, keen not to be lumped too closely with the euro's troubled periphery at a time when France's own economy is wobbling and in need of reform.

0 responses to “Germany, France to table new proposals for the eurozone”