Currently, there are tensions in the German debate because the ruling parties fear a  French-style scenario, the kind that propelled Macron's En Marche to the top. If this would happen in Germany, its traditional political landscape could see a real shake-up.  [EPA-EFE/FELIPE TRUEBA]

The leader of the German Christian Democrats (CDU), Annegret Kramp-Karrenbauer (AKK), made an offer to the French president: “I offered President Emmanuel Macron to discuss future transnational lists,” she told the German weekly Der Spiegel on Monday (24 June).

However, AKK stated that her offer would not be valid if Emmanuel Macron continued to oppose the German candidate for the EU Commission presidency, Manfred Weber (EPP). “Without the Spitzenkandidaten, transnational lists have no meaning,” she insisted. Weber comes from the CDU’s centre-right sister party, the Bavarian CSU.

“The CDU continues to support Manfred Weber,” Kramp-Karrenbauer said. She also called on social democrats and liberals to reconsider their opposition to the Conservative candidate.

“The Spitzenkandidaten process is a step towards a more democratic Europe. The European Parliament and parliamentary groups need to ask themselves whether they will not back down on the progress (already made),” AKK said.

The opposition in the German Bundestag rejects the idea of making an offer. “Annegret Kramp-Karrenbauer has the audacity to present this as a generous offer to Emmanuel Macron,” said an annoyed Franziska Brantner, a Green MP of the German Bundestag.

In 2014, Chancellor Angela Merkel had vigorously opposed the Spitzenkandidaten process. And the European People’s Party (EPP), whose group in the European Parliament is chaired by Manfred Weber, blocked the idea of distributing seats vacated after Brexit to MEPs from a transnational list.

Forming a majority: a matter of personality

“In 2014, Jean-Claude Juncker played it well as he had managed to secure a majority in the European Parliament, something which Manfred Weber obviously failed to do,” Franziska Brantner emphasised.

In Brantner’s view, the recurring argument in Germany that questioning the Spitzenkandidaten process would undermine the democratic legitimacy of the European Parliament is not a valid point. The European Parliament’s democratic legitimacy lies in its ability to find common political ground, not in the Spitzenkandidaten system itself, she pointed out.

“Political groups in the European Parliament have started to formulate a common political programme for the different factions, which will serve as a basis for the election of a European Commission president. We, the Greens, are very keen to follow this common programme,” Brantner said. 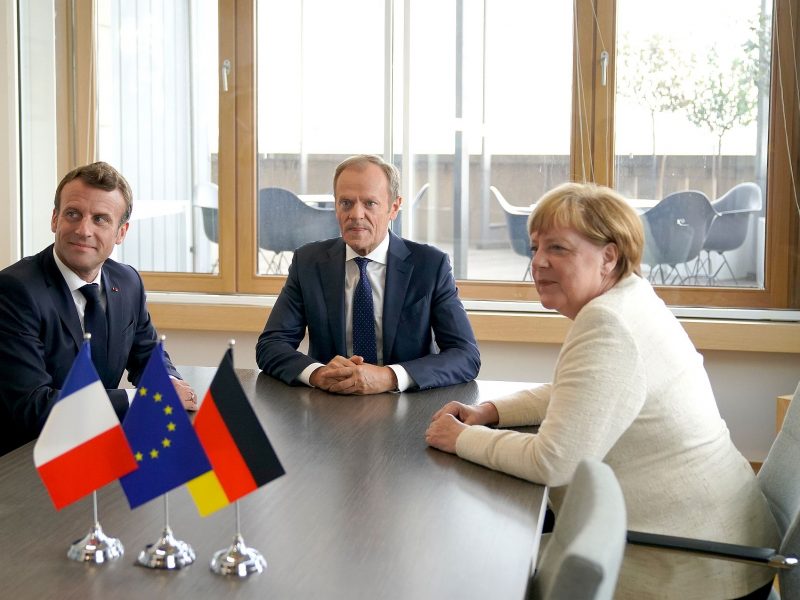 In search of lost continuity

The Spitzenkandidaten process is a projection on the European political scene of two elements of German political life, according to Claire Demesmay, head of the Franco-German relations programme at the German Council for Foreign Relations (DGAP).

“The party coming first in the elections takes the lead in discussions between the different parties to reach a common political agenda,” she said.

This common political programme is none other than a government treaty which, in the current Grand Coalition, binds the CDU/CSU conservatives to the Social Democratic Party (SPD).

However, the expert noted that the search for a common programme is currently absent in Germany when it comes to the debate about the European Commission presidency.

Currently, there are tensions in the German debate because the ruling parties fear a  French-style scenario, the kind that propelled Macron’s En Marche to the top. If this were to happen in Germany, its traditional political landscape could see a real shake-up.

“In Germany, it is a question of avoiding this scenario. The two traditional parties in power today (the CDU and the SPD), which have been at the heart of German democracy for decades, have no interest in suffering the same fate as their French counterparts, who are now facing an existential crisis,” remarked Claire Demesmay.

“Also, one should not forget that the German political landscape is already being shaken by the rise of AfD and the success of the Greens,” Demesmay added.

However, the newly formed liberal group in the European Parliament, ‘Renew Europe’, has shown interest in questioning the balances between political groups at the European level too, according to Demesmay.

“In Paris, change is expected, while in Germany, continuity is wanted. And for the CDU, questioning Manfred Weber’s legitimacy is tantamount to challenging the EPP’s position of power at the European level, and thus that of the CDU.”

Ultimately, the French government aims to advance its European project.

“In Paris, the European project has not changed, the government is still trying to move it forward, despite having encountered hesitation initially. Going through the European Parliament and the Commission to gain influence is another way to achieve this,” said Demesmay.