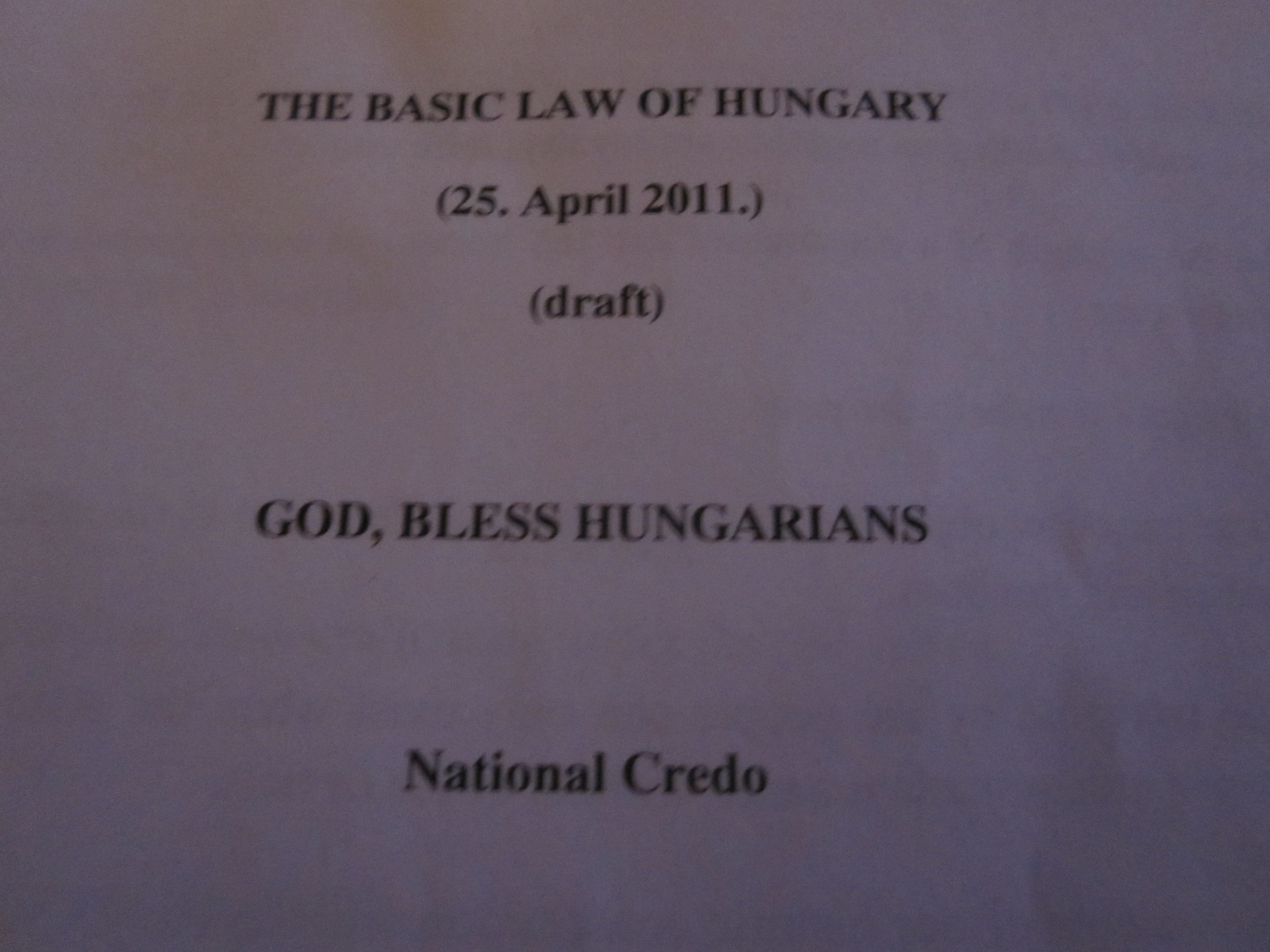 Its authors may have dubbed it "a constitution for the 21st Century" but the final text of the new Hungarian constitution, due to be adopted next month, appears to be a eulogy to the country's Christian roots and past greatness.

Christianity appears to be the driving force behind the new Hungarian constitution, which stipulates that marriage is a union between man and woman, and under which parents can receive tax rebates and vote on behalf of their underage children.

Its authors partly wrote it on an iPad and dubbed it "a constitution for the 21st Century," but the actual text of the new Hungarian constitution, obtained by EURACTIV, seems quite different.

In the constitution's preamble, the title "The Basic Law of Hungary" is followed by the subtitle "God Bless Hungarians," the first sentence of the Hungarian anthem and a reference to the many Hungarians who became citizens of neighbouring countries following the collapse of the Habsburg Empire.

"Motivated by the ideal of a unified Hungarian nation, Hungary shall bear a sense of responsibility for the destiny of Hungarians living outside her borders, shall promote their survival and development, and will continue to support their efforts to preserve their Hungarian culture, and foster their cooperation with each other and with Hungary," reads Article D of the constitution.

This, according to critics, represents a significant claim that could be invoked to give Hungarians beyond Hungary's borders citizens' rights and even issue them citizenship.

Fidesz MEP József Szájer, who is one of the constitution's three authors, told a small group of journalists yesterday (23 March) that in the preamble of the new constitution there was a "paraphrase" of what he called "the Lisbon Treaty slogan 'Unity in Diversity'".

"We are saying that our culture is a great contribution to the diversity of European unity," he said.

Szájer insisted that under the philosophy of the new constitution, Hungary was not giving away sovereignty by being an EU member, but was exercising sovereignty in the framework of the European institutions.

Fighting the Turks: A European value

The leading Fidesz MEP, who is also vice-president of the centre-right European People's Party group in the EU assembly, said that another important European aspect of the new Hungarian constitution was highlighting his country's contribution to defending the EU's values over the course of history.

"We don't say that, but that would mean from our fights with the Turks in the Middle Ages to the 1956 revolution, when European values have been defended," he said. Ironically, the leader of the 1956 revolution, Imre Nagy, is a communist, an ideology abhorred by Fidesz.

Another "European" element, he explained, was that any further changes to the Lisbon Treaty would have to be approved by a super-majority of two thirds in the Hungarian parliament. He also said that EU legislation would be adopted by adaptation to Hungarian law and a vote in parliament.

Szájer explained that the EU's Charter of Fundamental Rights, which is now enshrined in the Lisbon Treaty, had been integrated into the new Hungarian constitution, but this had not been a mere copy-paste exercise. He explained that where the authors of the constitution found that the Charter was not strong enough, texts had been reformulated.

The leading Fidesz MEP also drew attention to the "family" aspects of the constitution, according to which the tax system should reward those with many children

A unique aspect of the Hungarian constitution, Szájer said, was that parents would be able to vote on behalf of their underage children.

Many people, including Zoltán Tóth, the Hungarian secretary-general of ACEEEO, the Association of European Election Officials, think that this text infringes the UN's Universal Declaration of Human Rights. Article 21 of the UN text defends universal and equal suffrage.

However, as minors are not entitled to vote, their parents will have multiple votes in Hungary, infringing equal suffrage.

Interestingly, if each child brings an additional vote, Prime Minister Viktor Orbán and his wife will be entitled to vote at least six times for Orbán (they have five children, one of whom is already above 18 years of age so in theory he could vote for somebody else). It is not clear how divorced parents will be able to share out the extra votes.

Article M of the constitution reads that "Hungary protects the institution of marriage between man and woman, a matrimonial relationship voluntarily established, as well as the family as the basis for the survival of the nation".

Asked by EURACTIV how he could call a constitution that fails to award family rights to homosexuals a "21st Century constitution," Szájer said there was no EU legislation or requirement in this field.

"It also depends how we interpret the 21st Century. I don't think that the traditional concept of marriage has changed just because we came into another millennium," he said.

Another text of the new constitution appears to ban abortion. It reads: "Human dignity is inviolable. Everyone has the right to life and human dignity. The life of a foetus will be protected from conception."

Hungary’s biggest newspaper Népszabadság, which is close to the opposition,claims that the draft constitution that is sent to invitees for the EPP public hearing on the case on 29 March 2011 is full with translation mistakes and omissions. The news was also reported by EURACTIV Hungary on Blogactiv.

This is apparently the same draft published today by EURACTIV. According to the daily, there are some serious modifications and clear translation errors. Although much of the text is claimed to be 21st century, the first part is written in a quasi-archaic Hungarian language that is difficult to translate properly as it is not really spoken any more, Népszabadság writes.

The new Hungarian constitution will be ready on 15 March and will be adopted a month later, its main author, centre-right MEP József Szájer – who wrote part of it on his iPad – recently announced.

The country's opposition claims the procedure for adopting the new constitution is illegitimate and the controversy could impact upon the Hungarian EU Presidency.

Only about a quarter of the MPs bothered to participate in the debate on the constitutional draft.