French President Emmanuel Macron gave a lecture at the Jagiellonian University in Kraków on the second day of his Poland visit on Tuesday (4 February), where he covered multiple topics ranging from Europe’s common history to identity and climate change.

In reference to recent Polish-Russian squabbles over WWII history, Macron stressed that “Poland was not responsible for causing World War II. Poland was a victim of this conflict.”

“I would like to emphasise that France and the French are completely in solidarity with Poland and the Poles,” he said.

However, Macron also warned Poles to be aware of their own history, confessing he could not understand Polish leaders’ attempts to rewrite the history of 1989, which marked the fall of communism.

“We will not build Europe by forgetting its history. We cannot allow it to be falsified, no matter which party rules in a given country. We must build a common European memory,” the French president said.

And as expected, he then turned to Poland’s dispute with the EU on the rule of law.

“No state should give lessons to anyone. However, we are concerned about the reform of the justice system in Poland. It is our duty to defend the principles enshrined in the European Treaties,” Macron said. 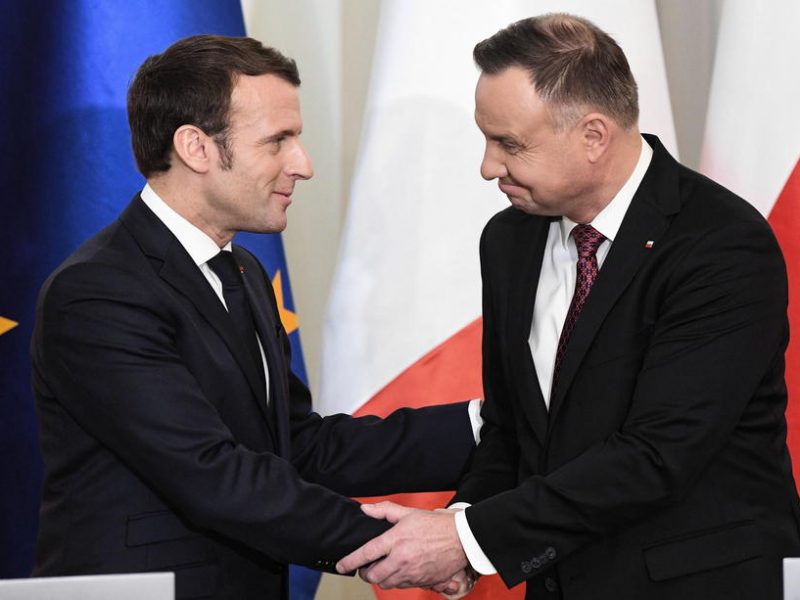 French President Emmanuel Macron sought a “turning point” in strained ties with Poland on Monday (3 February), saying Brexit requires a new dynamic among the remaining members of the bloc.

Turning to the challenges lying ahead, the French President chose to focus on border protection and relations with the EU’s direct neighbours.

“We need to rethink the borders of Europe, the attitude towards our neighbours,” Macron said. “We don’t have a real neighbourhood policy. This shows an inadequate approach. We will be a real, strong Europe if we face up to this challenge. Let us stop thinking that some countries are on the periphery of Europe. They are all at the heart of Europe”.

Earlier on, Macron touched upon climate and energy policy. Insisting that the EU must help Poland financially to wean itself off coal, the French President insisted that Warsaw must respect EU values and rules if it wants to benefit from the bloc’s funding.

Macron concluded his lecture by stressing that he and France loved Poland and that the country was needed to build a strong Europe.

All in all, Macron’s visit to Poland – the first in 6 years for a French president – did not produce any breakthrough. But it did help clear the air nonetheless in a rather tense bilateral relation.

With Poland’s presidential elections approaching in May, France seems to realise that the ruling PiS government is here to stay, as President Duda is doing better in the polls.

Recognising that, Macron’s visit was meant to reassure Poland of the EU’s unwavering support by praising the country’s history and ensuring Poles that they will not be left alone in case of conflict.

Both countries signed multiple declarations of cooperation in areas such as bullet trains, energy and climate change. France expressed interested in the development of nuclear plants in Poland and hopes to sign new contracts there.

France and Poland repeat support for an EU carbon border tax in a joint statement today. They "recall" the EU's goal for carbon neutrality by 2050. Poland is yet to formally endorse the target 👇 pic.twitter.com/wdu8iHsofb

On military cooperation, Macron even said he will unveil more details this week of a plan involving the defence of European allies with French nuclear weapons.

Whether the visit will produce any meaningful results remains to be seen, however. Poland is still in a fight with the European Commission over its judiciary reforms and many in the ruling coalition have adopted a hard stance against the EU, which could derail Macron’s efforts.

On defence and military cooperation, Poland has chosen to remain dependent on the US and is not willing to scale down relations with Washington, as shown by the recent acquisition of US-made F-35 fighter jets. Poland’s reliance on America’s military equipment has put Warsaw at odds with France, which wants greater defence cooperation within the EU and greater reliance on Europe’s own defence industries.

Paris did score ponts on that front, though. During Macron’s visit, Poland got on board of the so-called “European Main Battle Tank” project, which had previously been pursued by Germany and France, but without Warsaw.