French President Emmanuel Macron bemoaned a “weakening of the West” on Saturday (15 February) and called for more German involvement, while the US Secretary of State attempted to assuage European anxiety about declining transatlantic relation.

“There is a weakening of the West,” Macron told the Security Conference in Munich, taking a hit at Washington and adding that the United States for some years had a policy that “includes a certain kind of withdrawal, of a rethink of its relationship with Europe.”

Earlier in the day, Secretary of State Mike Pompeo spoke alongside NATO Secretary-General Jens Stoltenberg and refuted criticism of dwindling cohesion in the Western alliance.

“I am happy to report that the death of the transatlantic alliance is grossly over-exaggerated. The West is winning, we are collectively winning,” Pompeo told the Munich audience.

Pompeo said the allegation that the US was refusing to cooperate in the international community was wrong and called on the Western partners to jointly stand against an aggressive appearance by states like China, Russia and Iran. He explicitly called Chinese technology companies “Trojan horses” of Chinese secret services.

He contradicted German President Frank-Walter Steinmeier, who used his opening remarks a day earlier to accuse Washington, alongside Beijing and Moscow, of jeopardising the international order by stoking global mistrust and insecurity with a “great powers competition”. 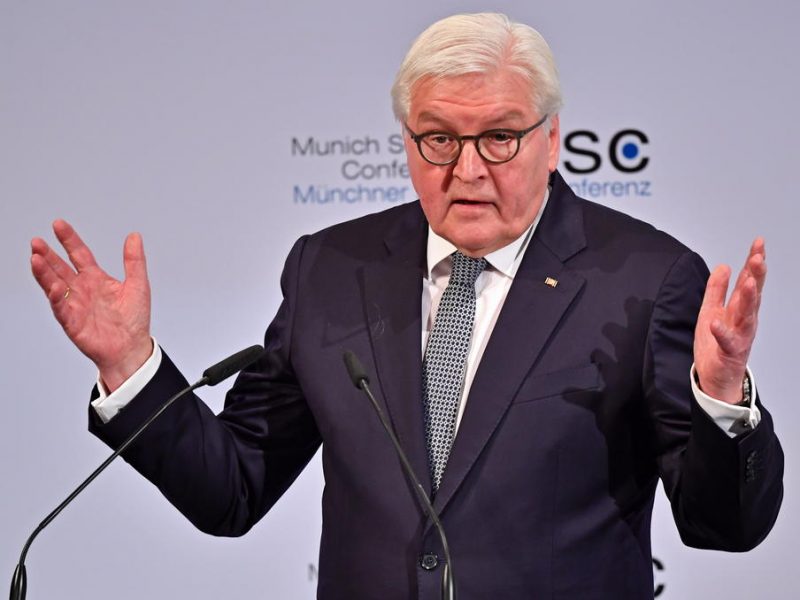 Macron has long been pushing for an ambitious European reform agenda, especially when it comes to “strategic autonomy” in the bloc’s foreign and security policy, and repeatedly stressed Europe must become more independent from Washington.

Asked if he was frustrated by Chancellor Angela Merkel’s silence on his proposed reforms, Macron answered he was “not frustrated, but impatient” over the lack of German response to his push for an ambitious post-Brexit overhaul of the bloc, especially when it comes to deeper financial and defence integration.

He pointed to a series of joint initiatives on military aircraft or batteries and cooperation between universities as evidence that the two countries can successfully work together, but insisted they need to move faster.

Macron complained that Germany and France had a “history of waiting for answers” in their relations and called for “clear answers” from both to the problems Europe is facing. A failure of the Franco-German tandem in the EU would be a “historic mistake”, he warned.

More recently, his offer to put France’s nuclear deterrence at the heart of Europe’s defence strategy was met with a cool response from Berlin, which has so far been wary of straying away from the US nuclear shield within NATO.

In Munich, Macron called on Germany to hold an honest debate about nuclear weapons and renewed his offer to Germany and Europe to slip under the French nuclear umbrella.

He went on to clarify – barely two months after his NATO “brain death” comments raised eyebrows – that his European defence vision “is not a project against NATO or an alternative to it,” but acquiring military strength would give Europe credibility and room for manoeuver.

“If we have no room for manoeuver, we have no credibility in terms of foreign policy,” Macron said.

Specifically, he said Europe would have to find sovereign answers in the areas of climate protection, development of the new 5G mobile communications standard or artificial intelligence – issues Europe has not been able to deal with for years.

According to Macron, after the financial and migration crisis, many in the EU have lost faith in democracy, which is why the bloc needs to help its middle classes “rediscover its appetite for the future”.

“We need to create a new dynamic for the European adventure,” he said, adding that the Franco-German tandem would need to be able to offer an answer about the perspective for the next 20 or 30 years.

Asked about his stance towards Russia, which had caused cracks in the European unity especially with Eastern Europeans, Macron said Europe’s policy of defiance towards Russia in recent years had failed and, as nobody wanted to confront Moscow directly, the only option was to renew dialogue to resolve differences.

“I hear the defiance of all our partners, I’m not mad, but I know that being defiant and weak … it is not a policy, it’s a completely inefficient system,” Macron said, adding that he saw none of his allies willing to confront Russia.

“There is a second choice, which is to be demanding and restart a strategic dialogue because today we talk less and less, conflicts multiply and we aren’t able to resolve them.”

Asked about the Western Balkans, Macron said he does not like the term “French veto”, adding that there were many countries opposed to opening accession negotiations last October.

He, however, hinted he would allow North Macedonia and Albania to begin talks on joining the EU if the bloc’s executive gave them a positive review in March.

“We are waiting for the report in March… depending on that, if the results are positive and confidence is established, then we should be in a position to open the negotiations,” Macron said in comments likely to reassure other European leaders that France still backs expansion to new members.

Worried by Chinese and Russian influence in the six Western Balkan states that aspire to join the bloc – Serbia, Kosovo, Montenegro, Albania, Bosnia and North Macedonia – Germany and the European Commission have said Macron was wrong to block them.

Macron’s shift makes it more likely that Denmark and the Netherlands, the other two member states who supported Macron’s ‘non’ in October, will drop their resistance ahead of a crucial EU-Balkan summit in Zagreb in May.

One response to “In Munich, Macron presents EU reform as answer to ‘weakening West’”