Ekaterina Zaharieva speaks to the press on 14 May 2018. [Council]

Speaking to the press following a webstreamed budget discussion held in the General Affairs Council, Bulgarian foreign minister Ekaterina Zaharieva described the discussion as “quite honest” and said a “huge varieties of opinion” had been expressed.

This is the first time that national ministers have discussed the Commission proposal tabled on 2 May.

The EU executive proposed a ceiling of €1.3 trillion, equivalent to around 1.14% of EU gross national income, up from the previous 1.03%.

The initial reaction from several member states was critical, while the European Parliament was broadly supportive. 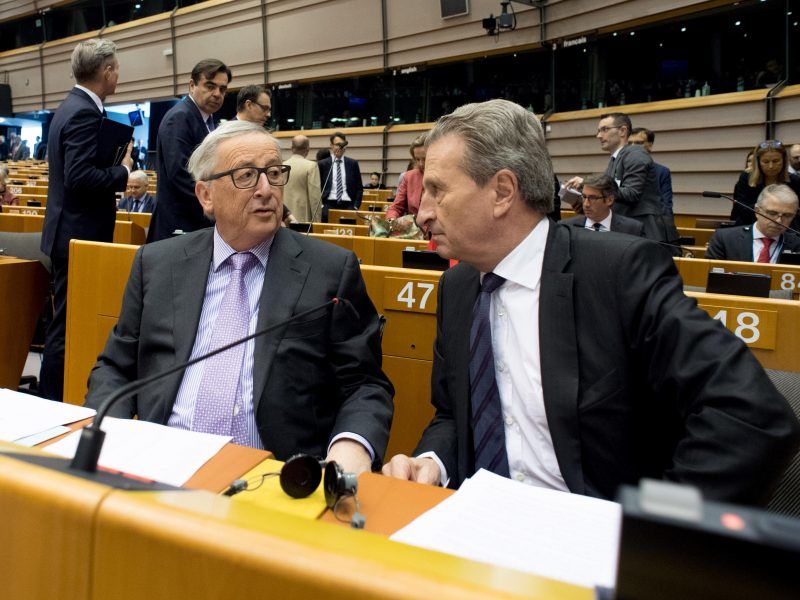 Budget Commissioner Günther Oettinger said he had read all the critical comments in public statements and on social media, which in his words shows that the Commission’s proposal is the right one.

He warned that if EU countries fail to agree in the coming months, the budget agreement would be delayed after the May 2019 European elections, which would be detrimental to projects when funding is expected to be increased, such as research, youth programmes etc.

Oettinger also warned ministers to be aware that “autocrats” in Moscow, Ankara and Washington were watching the debate.

EU Commissioner @GOettingerEU: “There are autocrats watching the #MFFdebate in Ankara, Moscow and Washington [sic!].“ #MFF

Nevertheless, Poland and Hungary expressed serious concerns about the legal base of the Commission’s proposal to introduce conditionality between EU funding and the rule of law. Konrad Szymanski, the Polish European affairs minister, called it a “massive power grab”.

German European affairs minister Michael Roth said Germany was ready to increase its contributions, if others accepted priorities such as the funding conditionality.

He was strongly supported by French counterpart Nathalie Loiseau. France has otherwise made it clear that it won’t accept cuts to the Common agriculture policy, as proposed by the Commission.

Swedish minister for EU affairs and trade Ann Linde was critical of the increase in total expenditure and also insisted on the conditionality factor. Other net contributor countries, such as Austria and the Netherlands, object to paying more into the EU coffers.

“The Swedish Government is critical of the large increase in total expenditure and wants burdens to be shared fairly. We also expect EU countries to stand up for our common values and welcome the idea of conditionality in the #EUbudget.” — EU Minister @AnnLinde at #GAC pic.twitter.com/bUmhFQ23dh

Zaharieva said the Bulgarian Presidency planned to organise seven working groups at expert level to discuss the long-term EU budget, one every week until the 28-29 June EU Council summit.

The #EU citizens deserve a good budget that makes sure #Europe?? works for all of them. @EU2018BG already started the debates and in the next month and a half, we will organize 7 working groups with experts for #MFF discussions. pic.twitter.com/Kk67Z9IsQB

Zaharieva said it was up to EU leaders to agree on a timetable, when asked about the chances of the budget being adopted before the European elections.

She added that these were going to be the “most difficult” negotiations for the EU budget, adding “but in my opinion – it doesn’t mean we should not try to do this before the EU elections”.

Diplomats say delaying the decision-making after the European elections may be counterproductive, as in such a case the issue would fall in the hands of an inexperienced Commission and a possibly much more eurosceptic European Parliament.