Rajoy insisted that, in order to start a dialogue, Catalonia should return to the Constitutional order. [Kiko Jimenez/Shutterstock]

Catalonia’s independence vote held on 1 October failed to meet the international standards to be considered as a properly organised referendum, the head of the international observation mission told EURACTIV.com on Wednesday (18 October).

In a phone conversation with EURACTIV, Daan Everts said that “due to the circumstances and the government response” the vote held in the region could not be considered as a referendum.

Daan Everts, head of the International Election Observation Mission in Catalonia, was quoted in El Pais as saying: “the mission must conclude that the referendum, as it was done, cannot meet international standards”.

The regional government reported that at least 900 people were injured during the 1 October vote as a result of the police intervention. The European Commission and the European Council President warned at the time that violence could not be the response.

Everts, a Dutch diplomat who works for the think tank The Hague Centre for Strategic Studies, will present the final conclusions on the vote next week. He stressed that he did not work for the Govern [Catalonia’s regional government].

He explained that the referendum was also affected by the problematic referendum law passed by the regional parliament.

Catalonia’s opposition parties complained that the law had been approved in an “undemocratic” manner.

A few days after its adoption, Spain’s Constitutional Court ruled that any unilateral referendum was to be considered illegal. 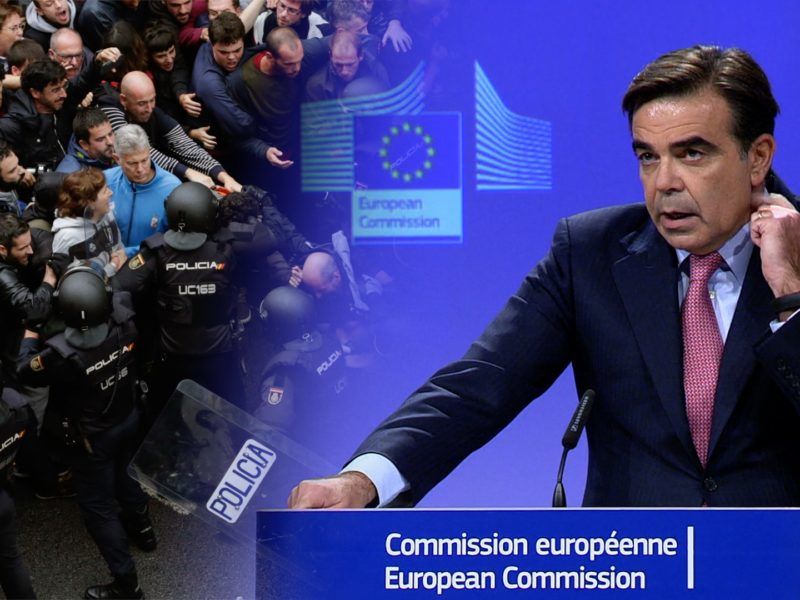 Catalan President Carles Puigdemont based his declaration of independence on the referendum results. However, he immediately suspended independence and sought a dialogue with Spain.

Spain responded by requesting that the government return to the legal order by last Monday (16 October). The central government also offered a Constitutional reform to review Spain’s territorial model.

On Monday, Puigdemont declined to accept the Constitutional order as he insisted on the referendum results. “More than two million Catalans entrusted to the parliament the democratic mandate to declare independence”, he said in the letter sent to the central government.

Despite “the very adverse circumstances…almost 2.2 million people cast their votes… and that represents a lot,” he said.

Romeva planned another last-minute visit to Brussels to address the international press before the extended deadline given by the central government expires on Thursday.

But he warned that the regional government would not backtrack on its intention to declare independence.

The Brief, powered by Eni: Politicians dug Spain in, will they dig it out?

The images of police breaking into voting centres in Catalonia to stop its unilateral referendum of independence, leaving more than 800 people injured, provoked precisely the opposite effect of what the central government had hoped to achieve.

If the regional government fails to meet Prime Minister Mariano Rajoy’s request, the central government will trigger Article 155 of the Spanish Constitution in order to seize competences and quash the political rebellion in the region.

Media reports suggest that the central government could take control of Catalonia’s fiscal competences and the regional police (Mossos d’Esquadra).

Catalonia, absent in the summit

The activation of Article 155 could happen just as Rajoy arrives in Brussels to attend the EU summit.

The leaders will discuss briefly the future of the European Banking Authority and the European Medicines Agency, both currently based in London, after Britain leaves the EU.

Barcelona is one of the candidates to host the EMA.

Rajoy is not expected to bring the Catalan crisis up during the leaders’ gathering, a Spanish diplomat said.

The internationalisation of the crisis has been a priority for Catalonia in order to offset the lack of a legal basis for launching the independence bid. 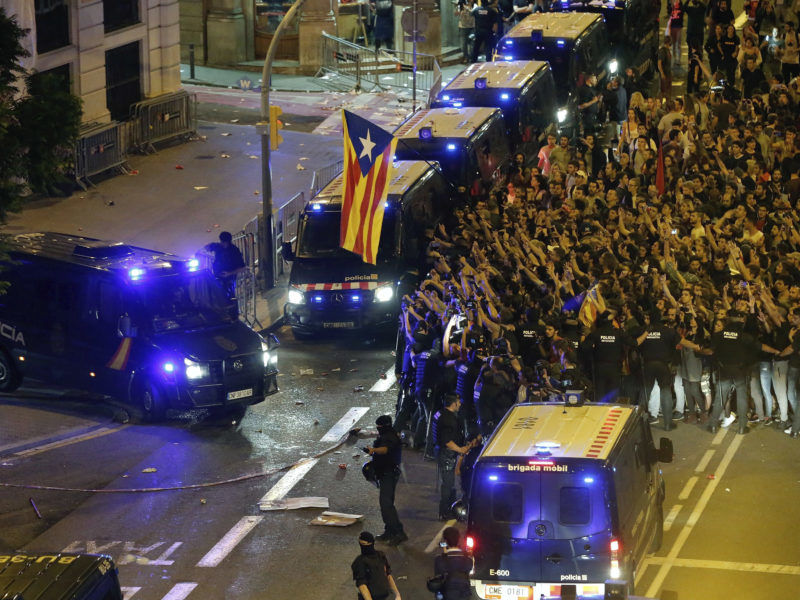 Catalonia is looking for an international mediator who would help build a minimum of “mutual trust” between Madrid and Barcelona following the region’s independence referendum on 1 October, Catalan Permanent Representative to the EU told EURACTIV.

“The European Commission must encourage international mediation,” Puigdemont said a day after the vote.

Despite these efforts, EU countries and international organisations did not respond to the regional government’s calls for mediation. Leaders and EU institutions insisted it was a domestic issue and only called for dialogue within the constitutional order. 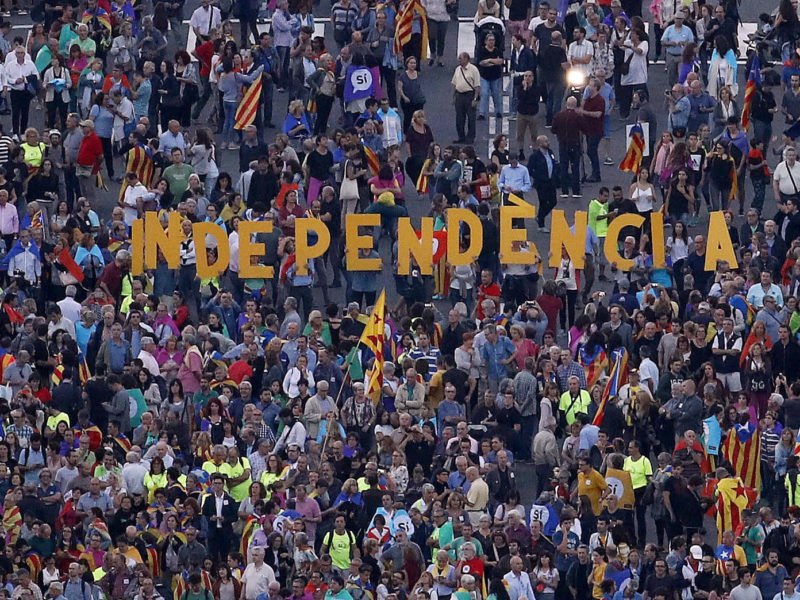 The leader of Spain’s breakaway Catalonia region has asked to meet the Spanish prime minister, aiming to restore dialogue and avoid further escalation, but has not provided a clear answer on whether he would press ahead with independence.

In order to overcome the political crisis the central government, supported by the Socialist Party, offered a Constitutional reform agreed by all the parties in the Parliament.

The reform was Rajoy’s concession to Socialist leader Pedro Sanchez, who had previously been reluctant to agree to invoke Article 155 but has now changed his mind.

But Barcelona did not accept this offer.

As an alternative, Catalonia could avoid the suspension of part of its autonomy if the Govern calls a snap election on Thursday, Sanchez said.

The option of snap elections was not seriously considered by the central and regional governments. Romeva told reporters that “this is not the scenario right now… it is not part of our programme”.

Rajoy’s ruling PP has not clarified whether letting the Catalans decide in new regional elections would help avoid the partial suspension of the region’s autonomy.

In the past regional elections held in 2015, a majority of Catalan voters (52%) did not support pro-independence parties.

The Socialist leader Sanchez visited Brussels today to take part in a conference organised by his European political family.

Sanchez also met with the European Parliament president Antonio Tajani and is due to meet European Commission President Jean-Claude Juncker on Thursday.

Only talks would stop independence if ‘yes’ wins in referendum, says Catalan official

Catalonia has told the Spanish authorities it is willing to consider proposals to avert the break-up, but is otherwise set to proclaim independence within 48 hours if the ‘yes’ camp wins in Sunday’s referendum, Raül Romeva, a member of the Catalan government in charge of foreign relations, said on Thursday.

The lack of progress in finding a solution between Madrid and Barcelona took place against the backdrop of the worsening situation in the region.

Around 800 companies moved their headquarters from Catalonia to other regions due to the legal uncertainty. According to David Veredas, a professor at Vlerick Business School, Catalonia could lose around €6.7 billion and no longer be the richest region in Spain.

Meanwhile, the arrest of the leaders of two pro-independence organisations triggered fresh protests in the streets.

Romeva referred to Jordi Sanchez (Catalan National Assembly) and Jordi Cuixart (Omnium Cultural) as “political prisoners” who were sent to prison “because of their opinions”.

The judge accused them of organising demonstrations aiming at “impeding the application of the law”. Both of them were accused of sedition.