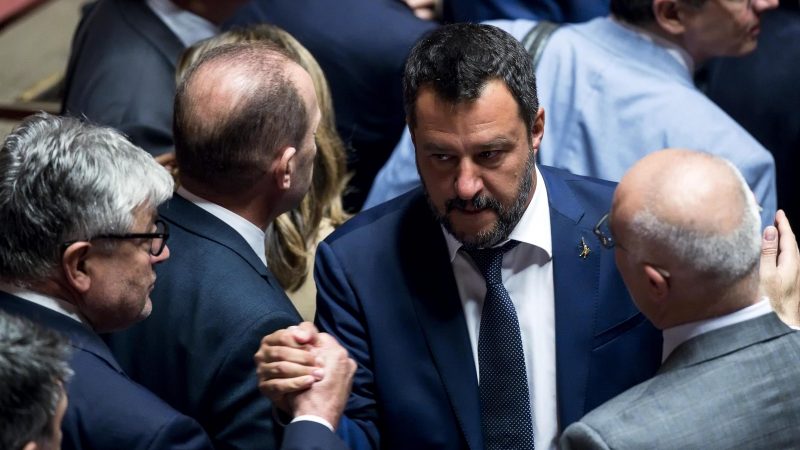 Deputy Premier and Interior Minister Matteo Salvini (C), during a session in the Senate in Rome, Italy, 07 August 2019. [EPA-EFE/ANGELO CARCONI]

Italian Deputy Prime Minister Matteo Salvini said on Thursday (8 August) there was no way to patch up differences in Italy’s ruling coalition and the only way forward was to hold new elections.

In the latest crisis on 8 August, Salvini calls for elections to be held as soon as possible after tensions escalate over the financing of a multi-billion-euro high-speed train line between Lyon and Turin.

Italian media had earlier reported that Salvini, in talks with Conte, set conditions for staying in the coalition which included the resignation of the transport, defence and economy ministers, who have resisted his projects and policies.

Salvini, leader of the right-wing League party, said in a statement that he had told Prime Minister Giuseppe Conte that the League’s alliance with the 5-Star Movement had collapsed and “we should quickly give the choice back to the voters”.

He said parliament could be convened next week to carry out the necessary procedural steps.

Italian Prime Minister Giuseppe Conte for his part said on Thursday (8 August) that the leader of the ruling League party, Matteo Salvini, must explain to Italians why he wants to bring down the coalition government.

Salvini, who is deputy prime minister and interior minister, said earlier that the coalition with the anti-establishment 5-Star Movement had broken down and he called for new elections.

“It is not up to the interior minister to convene parliament or fix the agenda of a political crisis,” Conte said, vowing to go before parliament to ensure “the crisis (Salvini) has unleashed is the most transparent in the history of the republic”.

In his brief statement from the prime minister’s office, Conte, who is close to 5-Star, said he would no longer accept Salvini’s attacks on his ministers and accused him of relying on “slogans” to drum up support.

“He must … justify to the voters who believed in the promise of change, the reasons that have led him to interrupt early and abruptly the work of government,” Conte said.

Here is a recap of more than a year of drama in Italian politics:

Italians vote on 4 March, 2018, in an inconclusive election marked by a far-right and populist surge and a campaign dominated by anger against immigration.

The outcome shakes the order of Italian politics in place for half a century.

The final results are inconclusive and both the anti-immigrant League party and the anti-establishment Five Star Movement go on to claim they have won the mandate to govern.

The League heads a right-wing coalition, which includes former prime minister Silvio Berlusconi’s Forza Italia, that takes 37% of the vote. Alone the party has over 17%.

League leader Matteo Salvini says he has “the right and the duty” to form a government, while Five Star chief Luigi Di Maio says his party has a “responsibility” to do the same.

Talks for a coalition

All the early attempts at forming a coalition come to nothing.

The two parties launch talks on 4 April to break a deadlock between their leaders, who have not budged publicly on their demands to be allowed to govern.

In a major step forward the two parties publish on May 18 a joint policy programme for their would-be populist coalition government.

On 21 May they propose a prime minister, little-known lawyer Giuseppe Conte, who gets working on drawing up a government.

The leaders of two would-be partner parties are furious. Di Maio calls for the president to be impeached and new elections to be held. Financial markets are increasingly feverish.

But on 31 May the parties launch a last-ditch bid to revive their coalition, offering a compromise candidate in place of Savona, who is proposed as European Affairs minister.

In a breakthrough during a late night meeting, Mattarella gives Conte a mandate for a second time and approves his list of cabinet ministers.

The government is officially formed on 1 June, and the first time a purely populist administration holds power in a founding member of the European Union.

Within days of becoming interior minister, Salvini implements his campaign promise to close Italian ports to immigrants and asylum seekers.

In the following months he raises his profile taking up airtime, column inches and social media clicks with his anti-immigrant diatribes, stirring up Italians’ feelings of insecurity and growing eurosceptism.

Over the summer of 2018 Di Maio tries to regain the upper hand, also lashing out at the EU over boatloads of migrants, and threatening to cut Rome’s funding for the bloc.

In a historic success for the far-right, Salvini’s League party wins the most votes in the May 2019 European elections in Italy with 34%.

The case had threatened to put the League and Salvini on a collision course with the Five Star Movement, which has taken a tough stance against corruption.

The case echoes that of fellow League infrastructure and transport undersecretary and Salvini confidante Armando Siri, who was sacked earlier in May amid graft allegations.

Conte sacked Siri despite Salvini’s protests that he had done nothing wrong and should stay in his job.