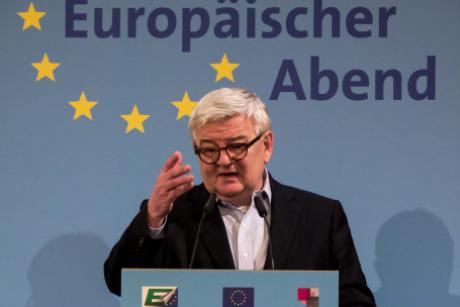 “Who wants to be ruled by Europe?”, asked Joschka Fischer opening his speech at the 21st “European Evening” hosted by the German Association of Public Servants (dbb) on Monday (24 November) in Berlin. The former foreign minister directly followed his question with the answer: “I do.”

Whoever is familiar with European history cannot dispute that great accomplishments have been made to this day, Fischer said.

Before the vote in the European Parliament, confirming his Commission on 22 October, Jean-Claude Juncker presented his team as the Commission ‘with the last chance”.

“The Juncker Commission as Europe’s last hope? Then we are done for”, Fischer said on Monday. “The Commission will never become a government because it does not even have a mandate for that – neither from the people nor from governments.”

Fischer said his hope is that the new Commission will move European integration forward. “But the central question of European governance is a legitimacy question,” he indicated. The dilemma facing us today is that people feel the EU “has become too powerful and important in our everyday lives, without our influence”, the Green party politician emphasised.

The issue of legitimacy is a critical point, when discussing Europe, Fischer explained. “We must change our thinking on this because the model we have today will not be able to remedy the legitimacy deficit.”

Legitimacy is simply acceptance from citizens, that there is a decision-making body whose decisions are fundamentally free from being questioned, the Green politician indicated, this voluntary acceptance is of key importance for the functioning of democracies.

“Legitimacy is missing at a European level. Why? Because the entire construct is actually one that seeks to omit the political. It is a bureaucratic construct,” Fischer explained.

The real crisis is domestic

The crises along Europe’s edges and pressure from the outside actually do more to unite Europe, the former German foreign minister continued, saying “the most difficult crisis is the domestic one.”

Precisely because of the inner-European crisis, political integration in the EU must be driven forward. To achieve this, the “axis of nation-states in Europe” must be redesigned. “We forget that the nation-states continue to be the actual political entities in the European Union”, the 66 year-old said.

As a result, the Council should become a governing body, Fischer argued. “They are elected. They are familiar. Germans more or less don’t care about Jean-Claude Juncker. When they seek out a leadership figure, it is the Chancellor.”

Here, Fischer used Switzerland as a case in point, an example he also introduced in his book Is Europe Failing?.

“Much can be learned from Switzerland. There, multiple languages did not become an obstacle for having a single state.” Fischer indicated that the government in Switzerland is much weaker than that of other political constructs.

“[Leadership] in Europe would not be comparable with the American president. But if a European government is desired, a central theme of compromise will have to be built into this construct.”

At the same time, Fischer said he does not expect national budgetary powers to be handed over to the Parliament any time soon. “If one wants a fiscal union, that is what must be considered,” the politician indicated.

Further, Fischer pointed out that he completely agreed with Chancellor Angela Merkel’s words in the Bundestag, when she said, “If the euro fails, Europe will fail”.

“If we do not add a political union to the monetary union, it will not be possible to fight the causes of the crisis,” the former foreign minister said.

“It is wishful thinking to believe the status-quo can be maintained while simultaneously ensuring stability, security and well-being,” he explained. For this reason, Fischer emphasised that these questions must be answered – in a joint German-French effort.

“We face the challenge of whether we have the courage and determination to drive centralisation on important issues.”

That courage does not exist at the moment, Fischer contested: “Neither in Paris nor in Berlin do I see a willingness to consider common initiatives, over how to create the Europe that can overcome the crisis.”

President-elect Jean-Claude Juncker secured confirmation for his new Commission from MEPs in October, winning over a grand coalition of Socialists and centre-right MEPs, using a combination of charm and a few last-minute tweaks to policy.

Speaking to MEPs ahead of the vote, Juncker warned that his Commission represented the "last chance" to win back citizens’ trust.

"Either we succeed in bringing European citizens closer to Europe, or we fail," he told MEPs. "Either we manage [...] to dramatically reduce unemployment, or we fail. Either we give a perspective to young Europeans, or we fail," Juncker said in a debate that saw him deploy humour to placate both the right and left.