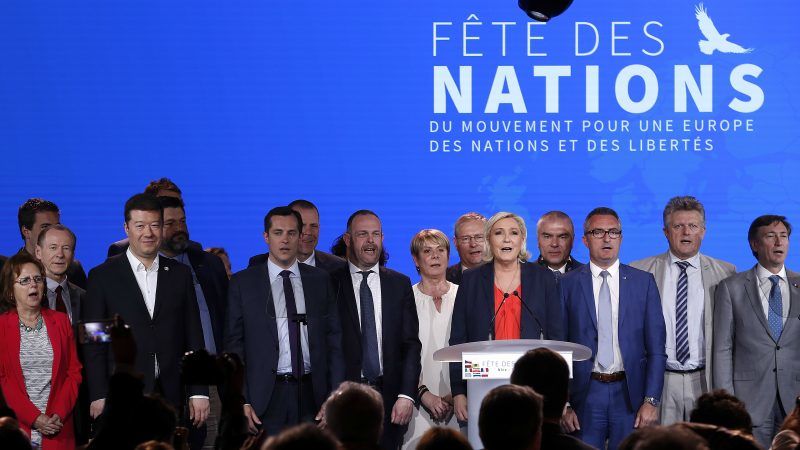 The National Front leader is hoping to bounce back from her defeat in last year’s presidential vote in the May 2018 elections to the European Parliament.

But there were key absences from the Nice meeting of parties from the Europe of Nations and Freedom (ENF) grouping, revealing cracks in Le Pen’s bid to create a grand alliance of Europe’s far right.

“Europe is a good idea but the European Union is killing it,” Le Pen told the rally on May Day, which was attended by the secretary general of Austria’s far-right FPÖ, Harald Vilimsky, whose party entered government in December.

.@vilimsky : "Globalism and multiculturalism are now failing ! They let in millions of immigrants, and the consequences are tremendous : crimes, terrorist attacks,… We did predict these risks !" #FêteDesNations pic.twitter.com/RliXEiKWGp

“The possibility of obtaining a majority to change Europe is not so far-fetched. It’s up to us to build this historic victory,” she urged.

After setbacks in France and the Netherlands in the first half of 2017 eurosceptic parties have chalked up major gains in several countries around Europe.

In Germany, the anti-immigration AfD in Germany garnered almost 13% of the vote in September’s election; in Hungary, nationalist Prime Minister Viktor Orbán was re-elected to a third term with a thumping majority last month; and in Italy, the eurosceptic League party is vying to form a government. Although ideologically close to the far right, Orbán is officially affiliated to the centre-right EPP.

League leader Matteo Salvini did not attend Tuesday’s rally but sent a video message of support instead.

A senior FN official, Nicolas Bay, told AFP that Wilders “had urgent business that required him to stay in the Netherlands”.

Among those who attended were representatives of the Polish Congress of the New Right, the Czech Republic’s SPD party and Bulgaria’s Volya.

The Congress of the New Right is a Eurosceptic force founded in 2011 by Janusz Korwin-Mikke, who was ousted in 2015. The force is now led by Stanisław Żółtek, an MEP.

The Czech SPD (Freedom and Direct Democracy, led by Tomio Okamura) has called for the country to quit the EU, pushing for a referendum similar to when Britons voted for Brexit in 2016.

.@tomio_cz : "We, as patriotic parties, defend freedom, sovereignty, equality of all our European peoples, that European Nations created thousands of years ago. We fight against Bruxelles' totalitarism !" #FêteDesNations pic.twitter.com/lMEdBnegQN

Bulgaria’s Volya party is led by businessman Vesselin Mareshki, sometimes called the ‘Bulgarian Trump’. Mareshki owns a chain of petrol stations and pharmacies and succeeds in selling fuel and medicines at prices well below the rest of the competition. Mareshki positions himself as oppositions, but in fact supports the Borissov government.

.@MareshkiVeselin : "Today, the priorities of the Bulgarian presidency are dictated by Bruxelles : open borders, alignment on the American wishes, sanctions against Russia… all against our national interests !" #FêteDesNations pic.twitter.com/KsQE9bB0LV

Le Pen has been struggling to recover from her stinging defeat by centrist Emmanuel Macron in the run-off of last year’s presidential election.

The FN leader took 36% of the vote — a historic performance for the party which nonetheless fell short of expectations.

Drawing the lessons of her failure, she has softened her policies on Europe which had scared off many voters.

She has ditched her unpopular proposal to quit the eurozone and organise a referendum on leaving the European Union.

Instead, she favours transforming the EU into a club of nations that work together independently.