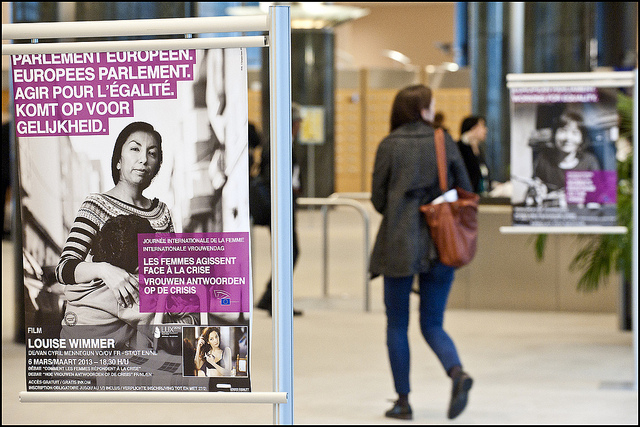 With only a 1.25% increase in the number of women MEPs in the new European Parliament compared to the previous legislature, women’s associations warn that it will take “half a century to reach gender parity at this pace”.

Although women make up more than half of the EU’s population, they are still underrepresented, with 36.75% of MEPs in the new Parliament, lagging well behind the 50-50 target gender equality lobbyists have been campaigning for.

As figures show, the more a party is left-leaning, the more it tends to respect gender parity, with the notable exception of the Greens.

At 51.11%, the only European party to achieve full gender parity is the European far-left party GUE-NGL led by the Greek anti-austerity campaigner Alexis Tsipras, followed closely by the centre-left Socialist and Democrats (S&D). Interestingly, the Greens lag behind the Liberal and Democrats (ALDE) and the non-attached (N/A) members of Parliament, falling under 40% of women.

Like GUE/NGL and the S&D, the Greens do have a gender quota policy at the party level, and were the only ones to put forward a mixed duo of candidates during the elections, with both Ska Keller and José Bové running for the EU Commission presidency.

But, as Serap Altinisik from the European Women’s Lobby explains, in many cases, “Green parties gave precedence to the men on the electoral lists – the male candidate leading the list, the female left second – like in the case of Belgium for example. The percentage they achieved in the end was not enough to send both the male and the female candidate,” she regrets, adding that they “should have made arrangements to present more mixed lists in which the leading candidate would have been a woman.”

The Greens, who are otherwise staunch defenders of gender equality, therefore find themselves sending less female MEPs than the ALDE group, where gender quotas are rarely used.

At the bottom of the gender parity ranking for these elections are all right-wing parties, ranging from the moderate European People’s Party (EPP) to the Europe of Freedom and Democracy (EFD), home to Eurosceptic parties such as Nigel Farage’s UKIP, with barely 8 women MEPs, or 21%.

The gradual lack of female representation across the right-wing political spectrum appears to mirror the ideology these parties stand for, according to Altinisik.

Left and centre-left parties are usually more inclined to have gender quotas. In Sweden, although there is no legal obligation for quotas, the Swedish Socialists and Democrats still have one at party level, which allowed them to have three women elected out of the five seats they have in the EP. The Finns who have a long history of gender equality managed to elect seven out of 13 female MEPs, without any national quota policy. “Both Sweden and Finland used to have quota policies in the eighties, but dismissed one they had achieved parity, which is the ultimate goal,” says Altinisik.

“The EPP on the other hand rarely has quota systems and when they do, it’s up to 33%, they’re not as committed to them as progressive parties,” she says.

In the French National Front (FN), not only are there no quotas, but female MEPs even had to resign in favour of a male counterpart, despite having won the votes.

No women’s rights for EPP and ALDE

“These parties’ programmes formulate ways to tackle the negative impact austerity policies in the EU have had on women’s employment for example.”

The European Women’s Lobby has also produced an assessment of the five main political parties’ election manifestos and their commitment on gender equality.

The ALDE and EPP’s programmes on women’s rights are not emphasized, EWL argues.

“When it comes to women’s rights and gender equality: they do not play a role in the manifesto of the European People’s Party; women and discrimination are not mentioned once,” the EPP assessment reads, while for ALDE, equality campaigners note that “the ALDE manifesto does unfortunately not go beyond the term of human rights and discrimination in a very general sense. Women and women’s rights, as well as gender equality are not mentioned once.”

The Liberals are also the most likely to have the greatest level of divergences across countries, depending on the national tradition. The British Lib-Dems, for example, have a “100% female representation”, since their only elected MEP is Catherine Bearder… a woman!

The European elections were held in all EU countries in May 2014. The centre-right European People’s Party (EPP) won 221 seats in the European parliament, followed by the Socialists and Democrats (S&D), with 189 seats (out of 751).

The centrist liberal groups got 59 seats, Green parties 52 and the right-wing Conservatives and Reformist group, 46.