The innovation president? Emmanuel Macron says he will give more time for debates ahead of legislative process, delegate power to the regions, and allow citizen juries on sensitive issues. [Gerard Bottino/Shutterstock]

Centrist Emmanuel Macron kept his position as favourite to win France’s presidential election after a televised debate on Tuesday night (4 April) in which he clashed sharply with his main rival, Marine Le Pen, over Europe, just 19 days before the election.

The televised debate was at times chaotic and often dominated by the anti-capitalist and virulently anti-EU smaller candidates who made their first major appearance ahead of the first round of the two-stage vote on 23 April.

The most telling clash between the frontrunners came at the end of the first section when 39-year-old Macron took on what is considered one of Le Pen’s vulnerabilities — her plans to scrap the euro and revert to the franc.

Macron was seen as having the best political programme, according to a snap survey that also placed him as the second most convincing performer in a four-hour marathon that involved all 11 candidates.

Criticising Le Pen, the leader of the National Front who wants to leave the euro, hold a referendum on European Union membership and curb immigration, Macron, who has taken a more aggressive approach than in a first debate on March 20, said: “Nationalism is war. I know it. I come from a region that is full of graveyards.” 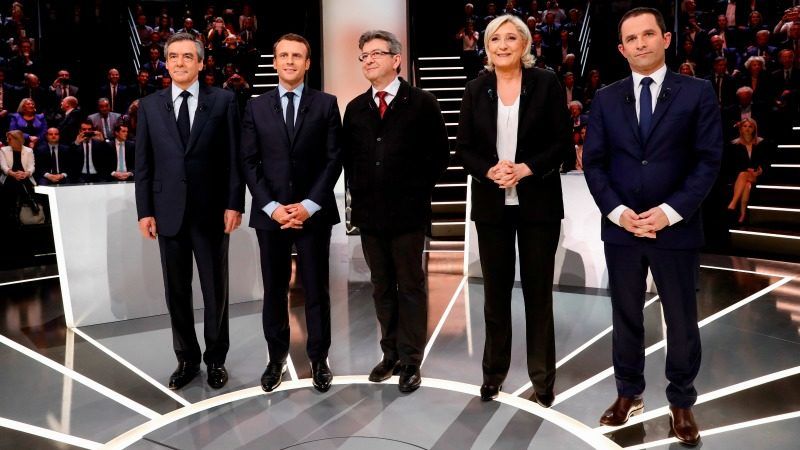 The centrist, who voiced his strong pro-European views, comes from the Somme region, a major battlefield in World War One.

Le Pen hit back at Macron: “You shouldn’t pretend to be something new when you are speaking like old fossils that are at least 50 years old.”

Macron retorted: “Sorry to tell you this, Madame Le Pen, but you are saying the same lies that we’ve heard from your father for 40 years.”

The comment appeared to be a swipe at Le Pen’s efforts to clean up the image of the party her father, Jean-Marie Le Pen, founded and make it more palatable to mainstream voters.

With just 19 days until the first round of voting in a rollercoaster contest, the debate could influence the momentum of the campaign, with around a third of voters still unsure of how they will vote.

Polls show far-right candidate Le Pen and centrist independent Macron in a dead heat at around 25% heading into the first round on 23 April. Macron is seen easily winning the second round on May.

Unlike the first debate, Tuesday’s featured all of the candidates and not just the top five, prompting fears it could become unwieldy. They included autoworker Philippe Poutou, who proposed the expropriation of the French banking system, and Communist firebrand Nathalie Arthaud who vowed to protect French workers from being “strangled by the capitalist system”.

Other anti-EU nationalists such as Francois Asselineau, Nicolas Dupont-Aignan and Jacques Cheminade, as well as farmer-politician Jean Lassalle, had a rare showcase on the national stage.

In the Elabe snap poll taken when the debate ended in the early hours of Wednesday (5 April), firebrand leftist Jean-Luc Melenchon, a veteran of France’s political circuit, took first place as the most convincing performer. Le Pen lagged in fourth place behind Macron and François Fillon.

Macron was seen in the same poll as having the best programme of all the candidates by 23 percent of viewers, followed by Melenchon, whose ratings have been rising since the first televised debate in March, to the detriment of Socialist Party candidate Benoit Hamon.

While the Elabe poll did not show voting intentions, other surveys have consistently shown Macron and Le Pen qualifying for the 7 May runoff and Macron winning it. The high level of undecided voters means the ballot remains unpredictable.

The race for the Elysée has been one of the most unpredictable in memory, with twists and surprises in which some big players have been marginalised and scandal has tainted others.

Macron himself is a former banker who has never held elected office and heads a fledgling political movement called En Marche! (Onwards!) which has no seats in parliament.

Scandals surrounding Fillon, the main centre-right candidate, and a Socialist party in disarray, have been gifts to his campaign.

Le Pen, a far more established fixture on the political scene, is expected by many to lead in the first round before being beaten by Macron in the May runoff.

In a debate that also discussed trade, immigration and security, Fillon and Le Pen came in for stinging attacks from two far-left candidates, who cited the judicial investigations facing them.

“Since January, it’s just been a great campaign … the more we dig, the more corruption there is, the more cheating there is,” said Philippe Poutou, a fringe candidate.

He was referring to a report in the satirical Le Canard Enchainé weekly that was the first to allege that Fillon had been paying his wife huge sums of taxpayers’ money for work she had not properly carried out.

Fillon, a 63-year-old conservative former prime minister, and his wife are being investigated over the allegations, although they deny any wrongdoing.

Le Pen in February used her immunity as EU lawmaker to refuse to go to a police summons over allegations she had made illegal EU payments to her staff.

Nathalie Arthaud said: “Supermarket cashiers can be fired just for stealing a voucher. There is a shocking discrepancy here.”

It was unclear whether a final debate scheduled for 20 April would take place after several of the leading candidates said it was being held too close to the election itself.