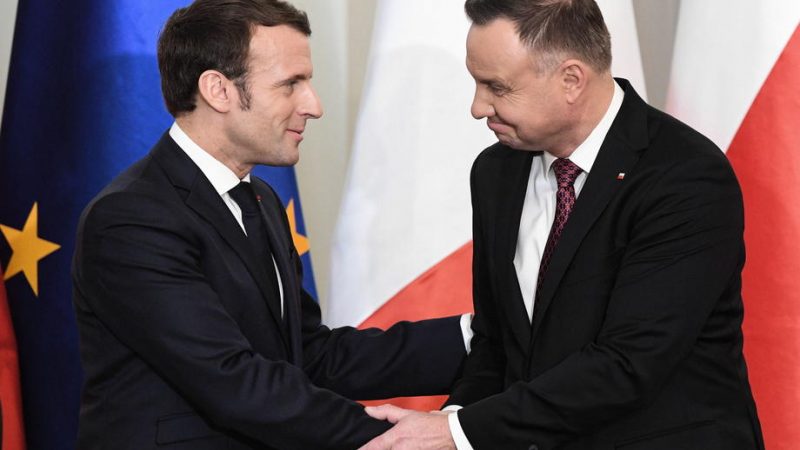 French President Emmanuel Macron sought a “turning point” in strained ties with Poland on Monday (3 February), saying Brexit requires a new dynamic among the remaining members of the bloc.

Macron announced a summit in the coming months with Poland and EU heavyweight Germany under the so-called “Weimar Triangle” framework which has fallen out of favour in recent years.

The last such a trilateral meeting between the leaders of the three countries took place in 2011.

The French president said these three nations “bear responsibility for Europe’s future” and should resume that role, particularly in light of the UK’s departure from the bloc.

Foreign ministers of the two countries signed a programme for Polish-French strategic partnership, which is the fulfilment of the declaration on strategic cooperation signed in May 2008.

Duda spoke of a “breakthrough” in ties and welcomed the signing of a Polish-French cooperation programme as part of their “strategic partnership”.

“We have no doubt that the EU will have to somehow take on a new shape, that leaving Britain by the UK means a new deal and a new opening; roles in the EU will have to be sorted out in a way,” Duda said referring to the UK’s exit on Friday (31 January).

Added Macron: “It is to further deepen this cooperation that I hope we can in the coming months hold a summit in Weimar, which will allow us to meet with the German Chancellor, because we have a central responsibility together, but also to continue and give substance to this strategic agenda that we started to build today.”

Poland’s controversial overhaul of its judicial system, which the EU has warned undermines the rule of law, as well as its position on EU climate goals, have drawn concern from Paris and several other EU member states, putting Warsaw on a collision course with Brussels.

In 2018, Macron accused Poland’s PiS government and Hungary’s populist Premier Viktor  Orbán of “lying to their people” about supposed EU “interference” in their domestic affairs, causing a diplomatic estrangement between Warsaw and Paris.

Speaking alongside his Polish counterpart, Macron said he had expressed concern about the current reforms of the judiciary.

“I would like the dialogue with the European Commission to intensify in the coming weeks. I know that in Poland – as its history shows – the values ​​of freedom and justice are deeply rooted,” Macron said.

The French president added that he hoped his visit “will mark a real turning point in the role that together we can play for the Europe of tomorrow”.

Together, he said, he wanted Paris and Warsaw to “make the European project stronger, because indeed today… after Brexit, fragility and doubt have set in.”

Cooperation must serve to “meet the climate challenge and support Poland, which faces a challenge that I do not underestimate,” Macron added.  An agreement by EU leaders in December to try to make the bloc carbon neutral by 2050 was undermined by Poland’s rejection.

“Our countries are closer than you might think,” added Macron. He noted that in the field of energy, security and defence can do “even more”.

Macron also stressed the importance of deeper military integration among EU member states – a message likely to appeal to Poland and other Eastern European members concerned by Russia’s assertiveness since its 2014 annexation of Crimea from Ukraine.

“I’ll be happy the day Polish people can tell each other: ‘The day I’m attacked, I know Europe can protect us’. Because that day, the sense of European belonging will be indestructible,” Macron said during a joint press conference with Duda.

“France is neither pro-Russian nor anti-Russian; it is pro-European,” Macron said, adding that “he is not naive” but that the situation is “demanding political dialogue with Russia”.

Only a few months ago, Macron caused an uproar among NATO members by calling the military alliance “brain-dead”, a comment which had been met with unease by Warsaw, who traditionally relies on Washington in defence matters.

Security relations between Poland and France had soured in 2016 after Poland’s PiS government scrapped a $3.4 billion helicopter deal with the European manufacturer Airbus, which France thought was largely agreed.

Instead, Poland signed a $4.6 billion deal with the US on Friday (31 January) for the purchase of 32 F-35A Lightning II fighter jets, which Polish officials called a significant step toward strengthening the security of the country and the region.

France, for its part, advocates for more European cooperation projects in the field, effectively aiming to boost its own domestic defence industry.

So far Warsaw has largely refrained to get involved in European defence cooperation projects, with the latest being Franco-German-Spanish project to develop the aircraft and drone of the future (FCAS).

Macron is also set to meet Prime Minister Mateusz Morawiecki and speakers of both houses of parliament in Warsaw on Monday evening.

On Tuesday, the second day of the visit, the French president will travel to Krakow, where he will visit the Wawel Royal Castle and give a lecture at the Jagiellonian University on the historical and current Polish-French relations, as well as his vision of the future of the European Union.