After last week’s European election campaign kickoff in France, Macron’s “En Marche” aims to sound its rallying cry against populism in Germany too. But it got off to a fairly modest start in Berlin. EURACTIV Germany reports.

About one hundred people gathered on a sunny Saturday (29 September) at Checkpoint Charlie in Berlin. They came to attend the “big march”, to which the party of French President Emmanuel Macron called in the run-up to the European election in May 2019.

Former MEP Daniel Cohn-Bendit has come, a figurehead of the Franco-German friendship who is also considered as a possible lead candidate of “En Marche” (LaREM). The majority on the scene are French people living in Germany, but also Francophile Germans.

Between EU balloons and flags, the debate evolved around a progressive Europe, reforms and again and again about the “fight” against nationalism. The warlike rhetoric highlights LaREM’s concerns in the election campaign – only recently did party leader Christophe Castaner speak of right-wing populist movements as the “enemies of Europe”.

Guillaume Klossa, the founder of the think tank EuropaNova and president of Civico Europa, also travelled to Berlin for the LaREM election event.

He explicitly warned against the influence of populist governments such as Italy or Hungary:

“It is not the EU itself that is in danger – because the countries are financially profiting from it –  but the rule of law, press freedom and pluralism in those countries that are under threat. We cannot allow a Mr Salvini or a Mr Orbán to make the EU their scapegoat and to try to reshape the EU according to their interests and against the founding values of the Union. “ 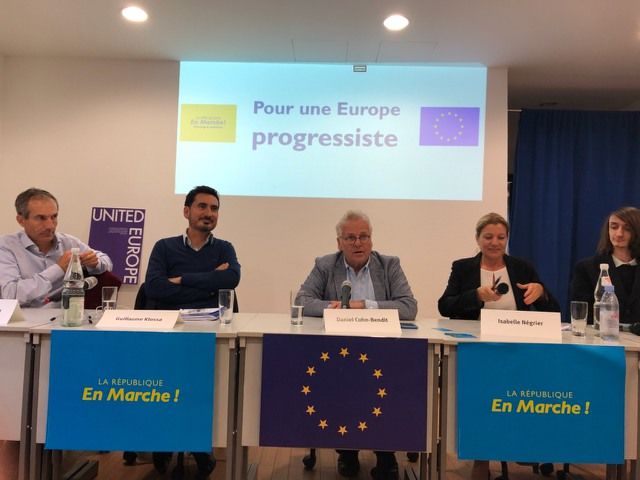 Discussion panel at the election event of “En Marche” in Berlin. © Isabelle Négrier

The march at Checkpoint Charlie was followed by a small roundtable over coffee and biscuits, where representatives of other pan-European associations such as “We Are Europe” and “Volt” also took part.

Isabelle Négrier, leader of LaREM in Germany and Austria, is also in defence mode: “There are forces outside Europe who would like to see a weakened EU. Therefore, nationalists must realise that a strong Union is the best answer. And that does not exclude state sovereignty. Be patriotic, be European, I tell them.”

Parties compete for partnership with “En Marche” in Brussels

En Marche is not the only one to sound the attack. For the leader of the liberal ALDE Group in the European Parliament, Guy Verhofstadt, the European election in May is mainly a “struggle between the nationalist and populists on the one side and a pro-European alternative on the other“.

Verhofstadt clearly aligns himself with Macron, who is currently touring Europe to tout for a progressive, pro-European movement. Verhofstadt even spoke of a possible union of En Marche and ALDE in the European Parliament.

Spain’s Ciudadanos movement, the right wing of the Italian Democratic Party and the German liberal FDP party have also signalled interest in an alliance with Macron.

Nevertheless, party leader Castaner, for now, distances himself from this idea: “We are not ready for an alliance,” he told Reuters. Talks about a possible new faction or some other type of alliance are, however, continuing.

Klossa welcomes the idea of a progressive merger in Parliament. “But in that case, it needs a clear roadmap, an identity that distinguishes itself from the progressive Christian and Social Democrats and represents an alternative.”

The latter would have to reinvent themselves to score in the election.

“Social Democrats must redefine what social democracy is today, if they do not want to completely perish. And the Christian Democrats need to be coherent with their values. It is not enough to speak out against Orbán’s policy without drawing internal party consequences. It needs a decision, whether he still has a place in the EPP or not.”

It is time for En Marche to draw conclusions from the citizen’s consultations organised in spring. With the exception of the UK and Hungary, consultations on Europe had taken place in all EU member states. In France alone, 71,000 people have been consulted.

“What we always hear is that people are very much in favour of the European project. That’s out of the question. But 80% of people criticise the way the EU institutions work – so we have to get there,” says Isabelle Négrier.

French President Macron and German Chancellor Merkel, who, for example, both call for a reduction of EU Commissioners, think similarly.

But with regard to further reforms, the German-French axis is still doing less than Macron has hoped for.

Despite repeated meetings of Macron and Merkel, such as for example in Meseberg in June or at the start of September in Marseille, the promises of the Federal Government seem to be followed by no real drive for Macron’s reform ideas – although they contain some of Germany’s positions in it, said Klossa.

“The reforms Macon proposed in the Sorbonne speech are not a French vision of Europe, but a communitarian one. It is shared by the majority of the members of the big parties in the European Parliament, as well as by civil society actors. He also takes up German ideas, such as those of Gesine Schwan for a central fund for integration measures in municipalities. But unfortunately, that is not perceived this way,” Klossa said.

Some experts see Macron’s promotional trip through Europe as an indication that the Frenchman no longer relies on Germany as its most important ally. The Merkel government is perceived to be weakened in view of the internal power struggles in the ruling coalition, they say.

At the gathering at Checkpoint Charlie, a place that symbolises the former division of Germany and Europe like no other, this pessimism is hardly noticeable. All of the involved agree that by the time of the election, a strong, pan-European alliance of progressives will be ready.