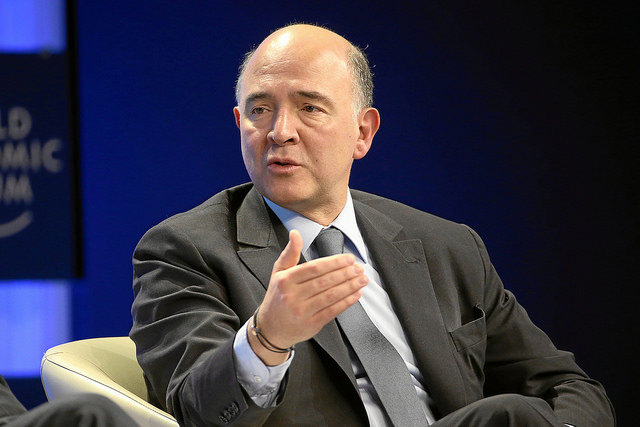 France’s leading candidate for the European Commission, Pierre Moscovici, is certain that Jean-Claude Juncker will be made president. He wants a Commission organised in “clusters” and that includes the Eurogroup President. EURACTIV France reports.

Pierre Moscovici, set to take over from Michel Barnier as Commissioner for France, claims that “Jean-Claude Juncker will be the next President of the Commission.”

Speaking at the French Institute for International Relations on 16 June, France’s former Finance Minister stated his support for the European People’s Party candidate, who is fiercely opposed by British Prime Minister David Cameron.

“He will be president because there are rules. Whether you like it or not, they are there. There is no ambiguity to the Treaty of Lisbon’s outlook. It is important that the five big parties chose to respect it,” said Moscovici, adding that “conflict between the European Parliament and the Council would be a mistake.”

David Cameron made it clear that the Parliament should not impose its candidate on EU heads of states. The British government is contesting the interpretation of the Lisbon Treaty where the next President of the Commission should come from the parliamentary group that won the EU elections. “The idea proposed by the Parliament is not fair. The Parliament should propose and the Council should dispose,” a diplomatic source told EURACTIV France.

The issue should be discussed next week during the European Council, 26-27 June. “If there is no consensus when we vote for the President of the European Parliament, there will be a serious problem,” said the source, who sees no problem in waiting for a general consensus before naming the new Commission. The next Commission should take office in November.

“The moment France, Germany and other big European countries agreed on Jean-Claude Juncker, other solutions were no longer welcome,” said Moscovici, who believes that Juncker, being from Luxembourg, is “capable of bridging the gap between the right and the Social Democrats, but also between Germany and France”.

Moscovici is currently acting as a special advisor on European issues to the French Prime Minister, Manuel Valls. He is preparing a report for the future Commission and will be visiting 15 European countries between now and the end of July.

Break away from Barroso’s “personal” style

Moscovici believes that Jean-Claude Juncker must break away from Manuel Barroso’s style, “which was very personal and concentrated powers”.

He is critical of the outgoing Commission, which has directed Europe for 10 years, and believes that Barroso’s presidential tendencies fragmented the European executive. It should be replaced with a more political Commission organised into five, six or seven “clusters” of core competences regrouping three or four commissioners. The idea is supported by France, Germany and Juncker himself.

“I believe that clusterisation of the Commission is crucial,” Moscovici said.

The idea of clusterisation has fuelled debate in Brussels. Small countries are against grouping portfolios by theme, because they are worried about getting “junior commissioner” positions, while the bigger countries take over the more important portfolios.

Integrating the Eurogroup Presidency to the Commission

A French candidate is unlikely to get the position because France does not meet the 3% target for public deficits, and has record-high public debt. Nevertheless, Moscovici believes France could get the job as a way of appeasing southern member states.

0 responses to “Moscovici: ‘clusterisation’ is crucial for next Commission”