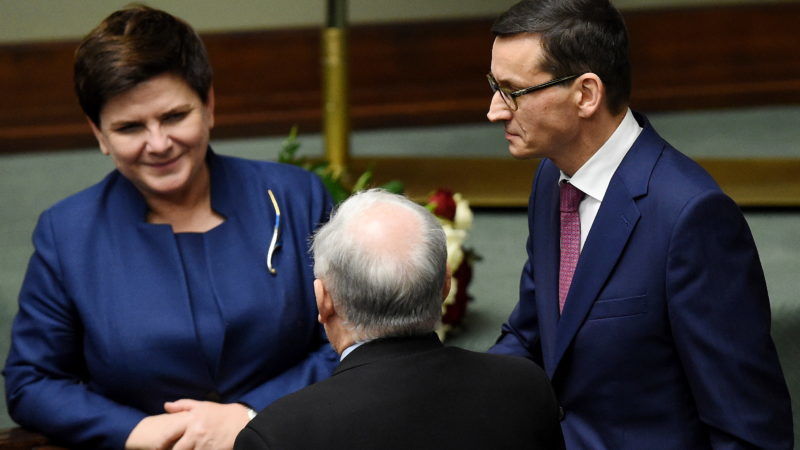 Morawiecki, 49, switched seats with Szydło, who became deputy prime minister. Although she had led one of the most popular governments since 1989, due to low unemployment, increased public spending and focus on national historic values, she was sacked by the ruling PiS party, which considered her too weak.

While outlining his policies in the Sejm (Poland’s parliament), Morawiecki sent a veiled warning: “Beloved Europe! The Polish puzzle fits the whole, but you cannot put it there in the wrong way or by force, because not only can this piece break – so can the whole picture.”  “Poland wants to be a champion of good change today and wants to participate in the decision-making processes in Europe,” the new prime minister declared.

“Unfortunately, there are still people who are given a head start in Europe, and those are not the poorest of them,” Morawiecki told Polish lawmakers.

Change and continuity, but no U-turn

In contrast to Szydło, who was the embodiment of the Polish provinces, Morawiecki is the exact opposite: fluent in English and German, educated in the US and Germany, with a degree in European law and economic integration.

After gaining international experience as an intern with Deutsche Bank, he worked in the government committee of Jerzy Buzek to prepare for Poland’s accession to the EU and eventually built a successful career as a banker. It is because of his international experience that European officials hope for a better relationship between Warsaw, Brussels and Berlin.

Nevertheless, he never abandoned his conservatism. The key to Morawiecki’s rise is his relationship with PiS party leader Jarosław Kaczyński. Rumours have it that Kaczyński wanted Szydło to step down because she was unable to handle internal government power struggles while Morawiecki, a party newcomer, poses no threat to his background leadership.

The son of Kornel Morawiecki, founder and leader of Solidarność Walcząca [Fighting Solidarity], one of the more radical splinters of the Solidarity movement in Poland, created in the 1980s in response to the de-legalisation of Solidarity and government repression, he also became active in the Polish anti-communist opposition at the age of 12.

Even before he became deputy prime minister for economic affairs, he claimed that Poland’s biggest problem is dependence on foreign capital – an issue he pursued to change since then. Under Szydło, Morawiecki also doubled as finance minister since September last year. He cut the budget deficit and installed the 500+ welfare programme, which provides 500 złoty (EUR 120) for families with more than one child.

Morawiecki calls for dialogue with Brussels

Although he is one of the few PiS members who can actually talk to the EU elite, his appointment is not a sign that Poland will change course. But his rational stance and a rather liberal take on economic matters might help Poland’s government improve relations with the EU as he will probably be a far more moderate negotiator than Szydło.

This goes in line with statements he made in a recent interview with the conservative newspaper “Gazeta Polska”:

“We want to open a new dialogue with Brussels but we also expect a new opening from Brussels. Less emotion and ideology, more rationality and real dialogue.” In his exposé, when referring to the case of the Białowieża forest, he emphasised he would “respect the rulings of the European Court of Justice, we will act in accordance with its judgment”.

After his appointment, both Commission President Jean-Claude Juncker and President of the European Council Donald Tusk congratulated Morawiecki and published their letters to him on their Twitter accounts. “I count on good collaboration,” Tusk wrote.

Juncker expressed hope that “Poland will continue to be a positive force for European integration” and that the Morawieck government will be an important factor contributing to Poland’s economic success.

“I am counting on you to actively participate in activities to strengthen the role of the EU as an important actor on the international stage, always standing on the side of democratic values,” the EC president wrote in his congratulatory letter.