The Lifeline NGO rescue vessel stranded in the Mediterranean with more than 200 migrants on board about to berth in Malta, on 27 June 2018. [Domenic Aquilina/EPA/EFE]

Migrant rescue ship Lifeline to dock in Malta after being stranded for 5 days in the Mediterranean https://t.co/EyWtDO3s3s pic.twitter.com/VEzGZbNOAL

“Lifeline will be granted permission to enter a Maltese port, where procedures for identification, ascertaining their asylum eligibility, and distribution to other member states will start immediately,” Muscat told reporters earlier on Wednesday.

“The Maltese government took the lead on a solution before the situation escalated to a humanitarian crisis,” he added, emphasising, however, that the small island nation was not legally bound to take in the vessel.

The Lifeline is the second charity ship that Italy has shut out of its ports this month after the new anti-immigrant Interior Minister Matteo Salvini said private rescue vessels would no longer be welcome because they “cannot dictate Italy’s immigration policy”.

Muscat said that permitting the ship to dock in Malta was a one-time, or “ad-hoc”, resolution to the standoff. While 650,000 migrants have arrived in Italy by sea since 2014, Malta has allowed in only those needing urgent medical care.

Italy has indicated it wants this kind of solution for sea rescues to continue.

Immigration has become an urgent political issue across the EU in recent weeks, since the new Italian government took power earlier this month and German Prime Minister Angela Merkel’s coalition split over the issue.

A summit between EU leaders that will tackle the bloc’s common framework for managing migration will be held in Brussels today and tomorrow.

“We are very proud that the crew rescued 234 people,” Lifeline spokesman Axel Steier said as the ship approached Valletta harbour, thanking Malta for taking it in. “This situation is special because the crew was out there for a long time and it’s not normal.”

Incredible relief to see #Lifeline finally in safe port on Malta. The last days have been stressful beyond description for those on board. We hope they can get rest soon. In response to those calling for seizing the ship, on the contrary: #freeIUVENTA! Photo credits: Selena Ena pic.twitter.com/Ml7kuPdqHZ

Germany was not among the countries that agreed to take in some of the migrants on the Lifeline.

Italy, Ireland, France, Luxembourg, Belgium, the Netherlands and Portugal “agreed to collaborate to offer a European solution”, a statement from Muscat’s office said.

The German charity ship #Lifeline finally entering the port of #Valetta, #Malta two hours ago, after 7 days with 238 migrants sleeping on the deck. They will be ‘distributed’ around 8 EU countries for asylum processing. #Lifeline is to be seized and investigated. pic.twitter.com/Is0z27iu1T

“This is a great victory,” Italian Transport Minister Danilo Toninelli said on Twitter, while Salvini called it “another success of the Italian government”.

The ship will be detained and the captain questioned, Muscat said, because of its refusal to leave the migrant boats to be intercepted by the Libyan coastguard, as it had been told to do by Italian authorities.

Italy and the EU have supported and trained the Libyan coastguard, and the Italian cabinet was due on Wednesday to approve handing over 12 new patrol boats to it after delivering seven others over the past year. 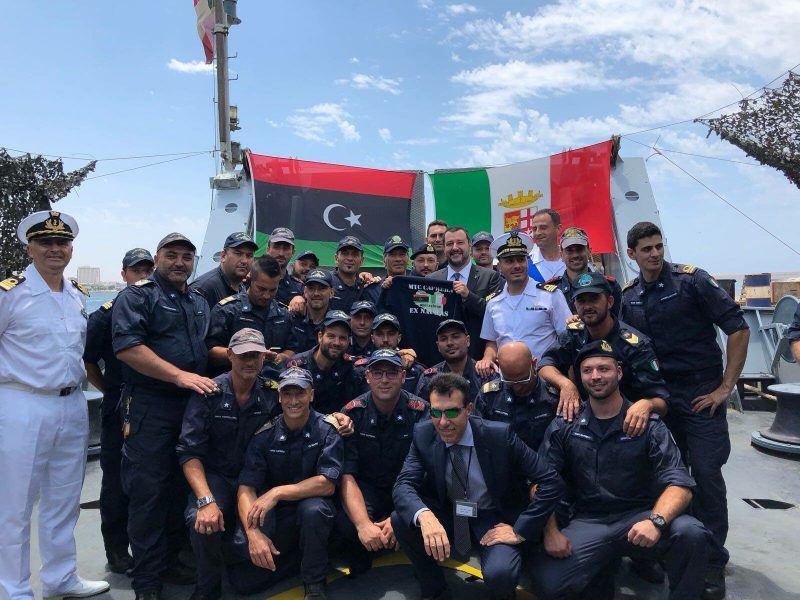 Italy’s pugnacious new government took its fight to block migrants to Libya on Monday (25 June) as a new boat with hundreds on board remained stranded at sea, deepening a crisis shaking Europe.

Lifeline has repeatedly said that allowing the Libyan coastguard to take the migrants back would have broken international law because the North African country is unsafe for them.

About 80% of an estimated 5,000-7,000 migrants being held in government-run detention centres in Libya were intercepted by the country’s coastguard, said Ibrahim Younis, who is mission head in Tripoli for Doctors without Borders.

Conditions in the centres are not good. Scabies is rampant and many suffer from tuberculosis, he said. The migrants are held indefinitely, but often those who get out are seen being brought back after they are picked up by the Libyan coastguard.