Negotiations on the EU’s next Multiannual Financial Framework (MFF) are about to kick off – a process that will ultimately decide on the shape and size of EU finances for 2021-2027.

And Commissioner Oettinger had a warning for EU countries that are reluctant to compensate for the budget gap that will be left after the UK leaves the European Union next year.

“I am not making these cuts because I want to or because I don’t like these programmes,” Oettinger said, but because some member states are not willing to increase their national contributions, he told the plenary session of the European Economic and Social Committee on Wednesday (19 September).

Oettinger was responding to accusations by the EESC that the Commission’s draft budget for the next seven years lacked ambition. The German Commissioner argued that he had to table a realistic proposal in order to get the approval of the 27 member states. But he also insisted that the current draft is just a “starting point” for negotiations.

“We have an opportunity here to say that cuts are not the way forward,” said Javier Doz, EESC rapporteur for the MFF. Doz asked Oettinger to convince member states “that we should not have budget cuts to pay for Brexit.” 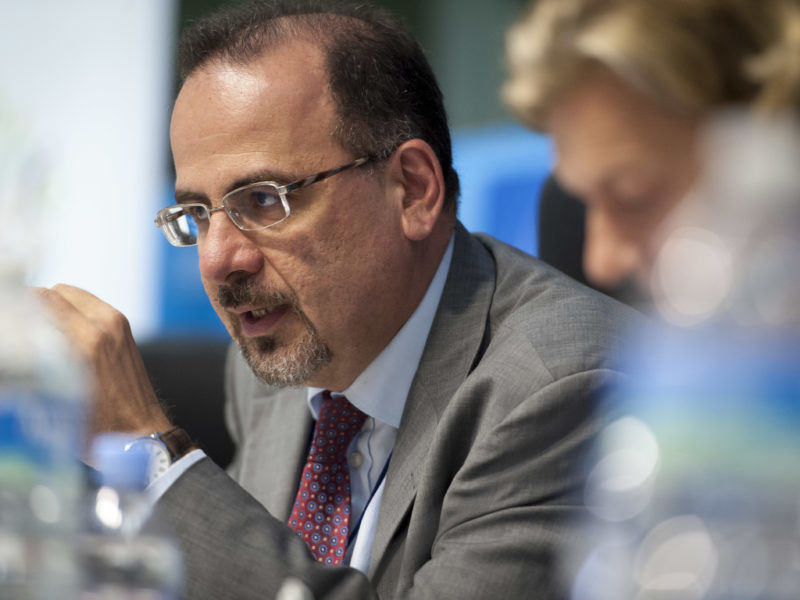 The EU executive proposed a ceiling of €1.3 trillion in its blueprint for the bloc’s next long-term budget, equivalent to around 1.14% of the EU’s gross national income. This is a little less than the European Parliament’s demand to increase expenditure to 1.3% of the bloc’s GNI, but still more than the current long-term budget, which is just above €1 trillion.

However, the EU will be left with a gap of €10 to 12 billion per year after the UK leaves the Union, Oettinger said. And since there are new long-term priorities on security, defence, and migration – cuts had to be made, particularly to the Common Agriculture Policy (5%) and Cohesion Policy (7%), he explained.

Austria, the Netherlands, Sweden and Denmark have made no secret of their opposition to maintaining the EU’s current budget size after Brexit.

Lars Løkke Rasmussen and Mark Rutte, the Danish and Dutch Prime Ministers, argued that “a smaller EU should mean a smaller budget.”

As the current holder of the six-month rotating EU Presidency, Austria is supposed to act as a deal-broker before its term ends on 1 January. But Austrian Chancellor Sebastian Kurz said in May that the Commission proposal “was not acceptable” for Vienna either.

Those who want a more driven budget will have to lobby member states for it, Oettinger warned, saying that without any cuts, his proposal would have been immediately rejected by EU countries.

“You have to lobby for something more ambitious in the budget. That would help me very very much,” the Commissioner said.

Members of the Economic and Social Committee recalled that increasing ‘own resources’ might be an alternative to cuts, as the European Parliament has stressed in previous statements as well.

Oettinger agreed but he again blamed member states for blocking those proposals, citing the digital tax as an example. The Commission proposed in March to charge a 3% levy on digital revenues of large firms like Google and Facebook, a proposal which met with criticism in Ireland, Nordic countries and Germany.

“It is necessary to take some time for debate,” German Finance Minister Olaf Scholz told the press at a Vienna meeting of EU finance ministers in early September. Germany is cautious about possible reactions by the US administration if the EU imposes a digital levy.

The same goes for the planned Financial Transactions Tax, also known as the Tobin tax, which has been blocked for seven years. “If we would have agreed on this, we would have had those resources,” Commissioner Oettinger stressed.

The sooner the better

Commissioner Oettinger and EESC representatives agreed that reaching a compromise for the next seven-year budget ahead of the May 2019 European elections would send an important signal to EU citizens.

“I would ask you please to help me so that the MFF becomes a priority,” Oettinger said, so that member states would adopt it as soon as possible, ensuring a smooth transition between programming periods.

“We need this for the citizens,” Jahier added.