On Sundays, Germans in Ode to Joy for Europe 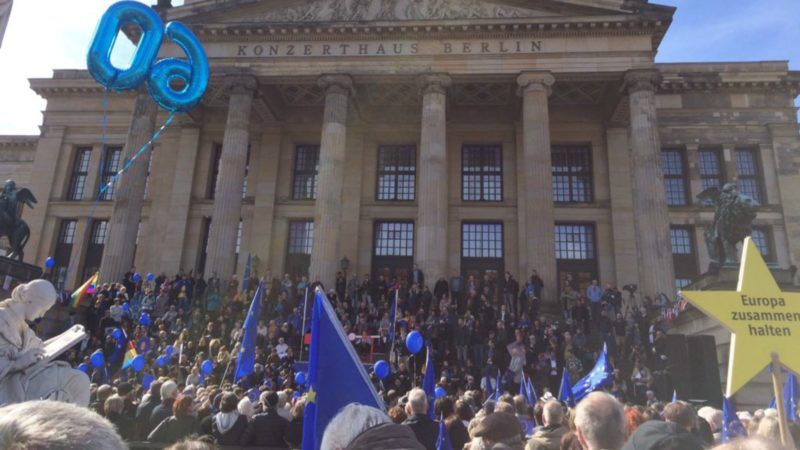 "Pulse of Europe" in Berlin. [@taby_feliz/Twitter]

Fed up with Eurosceptics hogging the headlines and political debate, a growing number of Germans are going on the march to express their fervour for the European Union.

So-called Pulse of Europe rallies are taking place in many cities every Sunday in support of the European project, buffeted by Brexit and anti-EU parties in France, the Netherlands, Italy and Austria.

Be in Bath on Sunday, April 2nd for #pulseofeurope Over 200 last time – make it bigger! https://t.co/jWRwuAIYWa pic.twitter.com/x2Vb0cWxgY

“Populism is rising strongly. These protests are a way to make a stand against that,” said retiree Nicole Schacht. “I grew up with Europe and I believe in Europe.”

On Sunday, 6,000 people gathered at Berlin’s Gendarmenmarkt square at the statue of poet Friedrich Schiller, whose poem “Ode to Joy,” set to music by Beethoven, is the EU’s anthem.

Families with prams, young students and well-dressed retirees brandished the EU’s blue flag with the ring of yellow stars and listened intently to speakers.

Those taking the microphone championed how the EU had changed their lives, from post-World War II reconciliation to the Erasmus university exchange programme. 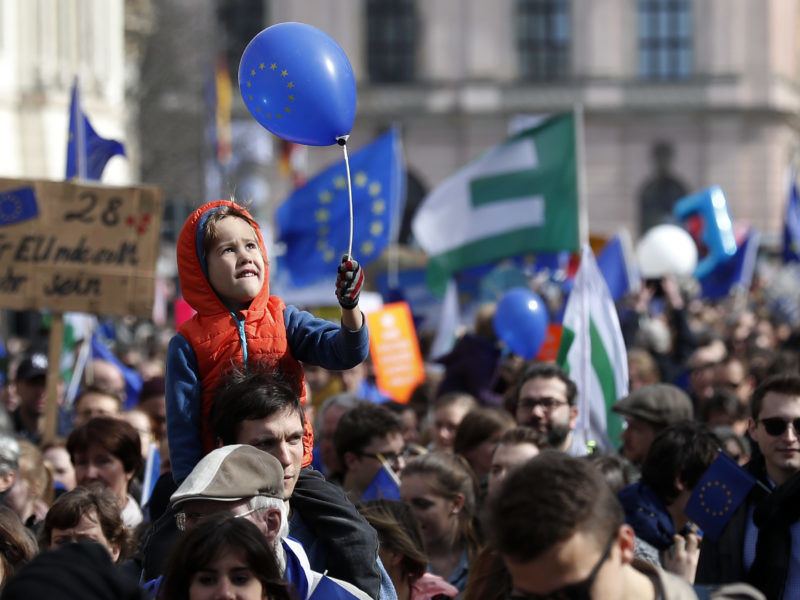 “We’ve had the European treaties for 60 years, for 60 years we have been free. We have to defend that,” cried one speaker, Daniel Winter, 39.

“We can’t bring to power those blond-haired characters called Le Pen, Boris Johnson or Donald Trump who want to end all that.”

The idea of taking a stand in favour of Europe was born a day after Trump’s election in the United States, when Frankfurt lawyer Daniel Roeder and his wife Sabine decided to organise a small rally.

With Germany heading for September elections when the anti-Islam and anti-euro populist party AfD could win seats for the first time, Roeder said he could not settle for “protesting only when it’s too late”.

The number is small compared with far bigger rallies in German history.

But it is a remarkable increase for a movement that, just four months ago, began with a turnout of couple of hundred. Supporters say the rise points to a depth of feeling that may command political clout.

“These are people who grew up with European integration and have the fundamental conviction that the movement is irreversible. That conviction has been shaken,” columnist Sandra Eckert wrote in the Frankfurter Allgemeine daily.

"Right after having been written off, Europe is suddenly an option once again." Via @KathrinFinke #pulseofeurope https://t.co/BCilJgyEVh

Discover a few pictures of the 1st #PulseOfEurope gathering in Dublin! It was yesterday in front of GPO! https://t.co/VQHL3kfGmt @emireland pic.twitter.com/jU8l8I79R4

In Britain, too, pro-EU feeling is strong among the 48% of the population who last June voted to stay in Europe.

Last Saturday, tens of thousands marched in London to mark the EU’s 60th birthday, just four days before Prime Minister Theresa May formally launched the process to exit the bloc.

But pro-EU sentiment in Germany is especially strong, and this is no accident.

After Nazism left Germany ostracised by the rest of Europe, the European project allowed the country to rejoin the fold of civilised nations as an equal.

The European idea has thus earned the allegiance of a post-war generation of Germans.

Movement organisers say they are not linked to any party or lobby group and only seek “to keep the movement going from Sunday to Sunday”.

But Eckert believes that if they keep up the momentum, “such movements have the potential to influence the elections by raising the visibility of the European question”.

Whereas Eurosceptics focus on loss of national sovereignty or the problems of the eurozone, pro-EU supporters in Germany dig deep into the European Union’s record for keeping the peace.

There has been no war on the continent since the breakup of Yugoslavia in the 1990s, and conflict between France and Germany, which clashed three times in 70 years, is unthinkable.

At the Gendarmenmarkt rally, many eyes glistened as the crowd sang “Ode to Joy”: “Your magic power re-unites, all that custom has divided, all men become brothers, under the sway of your gentle wings.”

“Europe is a human construction. With these demonstrations we want to maintain a bond between people.”

6 responses to “On Sundays, Germans in Ode to Joy for Europe”