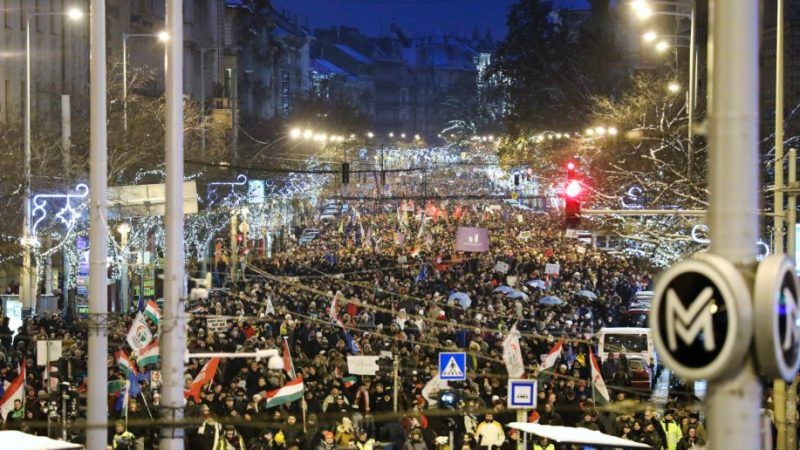 Security guards ejected two independent lawmakers from Hungary’s state television building on Monday (17 December) after they tried to read out a petition, a day after police used tear gas against pro-democracy protesters in Budapest.

The two lawmakers were among about a dozen members of parliament who spent the night in the state television building demonstrating against the policies of Hungary’s right-wing Prime Minister Viktor Orbán.

MUST WATCH: This is what happens when an opposition MP tries to get air time on public media in Hungary. Akos Hadhazy is roughed up and dragged away by armed security guards. #Hungary pic.twitter.com/7wa8ImFp1u

Sunday’s protest, that brought around 10,000 people out onto the streets of Budapest, was the fourth and biggest against Orbán in a week, effectively uniting the fragmented opposition in action against his government for the first time since 2010 when he came to power.

“Lawmakers being thrown out using physical force is unlawful and unjustified,” said Daniel Dobrentey, a lawyer at the Hungarian Civil Liberties Union (TASZ).

The protests, which have been organised on Facebook and attracted many young people and students, were to resume on Monday at 1700 GMT.

In their petition, the opposition lawmakers backed the protesters in calling for the withdrawal of a new labour law, for independent public media and courts and for Hungary to join the European Union’s prosecutors office.

A spokesman for Orbán’s ruling Fidesz party criticised the lawmakers for going to the state TV building and said they were abusing their parliamentary powers by seeking to “meddle in editorial operations.”

Independent lawmaker Bernadett Szel posted video footage on her Facebook page that showed the security guards tussling with her fellow-MP Akos Hadhazy and throwing him out of the building. Szel said she had also been ejected.

“We wanted to have our petition read out,” she said in the video.

On Sunday, some 10,000 protesters took part in a march dubbed “Merry Xmas Mr. Prime Minister” against what they see as the increasingly authoritarian rule of Orbán.

Demonstrators are leaving Heroes' Square and walking towards downtown Budapest. Thousands showed up to protest the new overtime law and other government policies. Trade unions are leading the march, with opposition parties following under their own flags #hungary #SlaveLaw pic.twitter.com/9wEH3uMzuP

The protests pose no immediate threat to Orbán, who has strong core support which helped him return to power again in April.

But Peter Kreko, director of the think tank, Political Capital, said the government’s reaction to the protests showed “short-sighted arrogance.”

He said while it was unclear who ordered the MPs to be thrown out of the public TV building by security staff, the reaction of Fidesz to the events showed a new level in Orbán’s policy.

“This is stepping up one level in the regime’s authoritarian logic,” Kreko said.

Asked to comment on the recent authoritarian decisions in Hungary, including the passing of the so-called “slave law” and the setting-up of new “administrative courts” controlled by the government, Commission chief spokesperson Margaritis Schinas read from a paper prepared in advance.

He said that the EU executive shares the concerns expressed in the European Parliament report last September, in particular as regards to fundamental right, corruption, the treatment of Roma and the independence of the judiciary.

Schinas said the Commission contributed to the discussion in the General Affairs Council on 11 December with suggestions how to take the discussion forward.

“It’s now up to the Council to decide how to proceed. The Commission stands ready to provide ministers with all necessary information on its actions regarding Hungary”, he said.