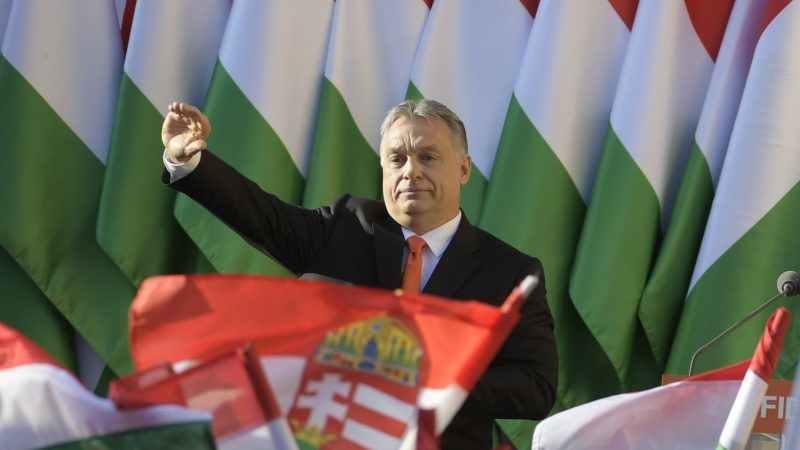 The rightwing nationalist prime minister projected himself as a saviour of Hungary’s Christian culture against Muslim migration into Europe, an image which resonated with millions of voters, especially in rural areas.

“We have won, Hungary has won a great victory,” a jubilant Orbán told a large crowd of cheering supporters near the Danube river in Budapest.

Ornan’s supporters cheers outside Fidesz election HQ as the party seems to get nearly 2/3 of electoral support. pic.twitter.com/FmwURIrjiX

“There is a big battle behind us, we have won a crucial victory, giving ourself a chance to defend Hungary.”

According to preliminary results with 93% of votes counted, National Election Office data projected Fidesz to win 133 seats, a tight two-thirds majority in the 199-seat parliament. Nationalist Jobbik was projected to win 26 seats, while the Socialists were projected as third with 20 lawmakers.

Two-thirds majority or not, the result will give very strong legitimacy to Fidesz & strengthen Orban's resolve that hatemongering works. That's a race to the bottom. #HungaryElections

That means Orbán could have a two-thirds majority for a third time, and powers to change constitutional laws. The EU has struggled to respond as Orbán’s government has, in the view of its critics, used its two landslide victories in 2010 and 2014 to erode democratic checks and balances.

The victory could embolden Orbán to put more muscle into a Central European alliance against the European Union’s migration policies. Orbán, Hungary’s longest-serving post-communist premier, opposes deeper integration of the bloc and – teaming up with Poland – has been a fierce critique of Brussels’ policies.

He expressed gratitude to Poland’s leaders for their backing ahead of the vote.

“Great and clear victory for Viktor Orbán in Hungary: reversal of values and mass immigration as promoted by the EU are rejected again. Nationalists could win a majority in Europe at the next European elections in 2019,” Le Pen tweeted.

The election produced a turnout of around 70%, exceeding the past three votes.

Some analysts say Fidesz’s support was the strongest in small towns and villages.

With his firm grip on state media and his business allies in control of regional newspapers, Orbán’s message was amplified in the countryside. There, many people only watch the state television news channel, which has showed immigrants causing trouble in western European cities night after night.

The strongest opposition party in the new parliament is the formerly far-right Jobbik, which has recast its image as a more moderate nationalist force.

It campaigned on an anti-corruption agenda and urged higher wages to lure back hundreds of thousands of Hungarians who have left Hungary for western Europe.

Jobbik’s leader Gábor Vona said he would tender his resignation after the defeat.

“Jobbik’s goal, to win the elections and force a change in government, was not achieved. Fidesz won. It won again,” he said.

Critics say Orbán has put Hungary on an increasingly authoritarian path and his stance on immigration has fuelled xenophobia.

With a message that he stands for all Hungarians against foreign meddling, Orbán tapped into feelings shared by many Hungarians who perceive threats to their national identity and feel they are treated as second-class citizens in the EU.

He seized the moment when on Jan. 12 2015, he said immigration into Europe should be largely halted after Paris attacks launched by Islamist extremists.

“We should not look at economic immigration as if it had any use, because it only brings trouble and threats to European people,” he told state television then. “Therefore, immigration must be stopped. That’s the Hungarian stance.”

In September 2015 he built a razor-wire fence on the Serbian border to keep out tens of thousands of migrants fleeing war and poverty in the Middle East and Africa. Since then his government has enacted a series of laws to control migration, and his tough measures have been sharply criticised by the United Nations.

After casting his vote in a wealthy district of Budapest, he said he would stand up for Hungary’s interests.

Asked by journalists if he was fighting the European Union, Orbán said: “The EU is not in Brussels. The EU is in Berlin, in Budapest, in Prague and in Bucharest.”

Orbán’s strong win could boost other right-wing nationalists in Central Europe, in Poland and in neighbouring Austria, and expose cracks in the 28-nation EU.

Orbán, 54, has curbed the powers of the constitutional court, increased control of the media and appointed loyalists to key positions.

He is credited with keeping the budget deficit under control, reducing unemployment and some of Hungary’s debt, and putting its economy on a growth track.

On Friday, at his closing campaign rally, he vowed to protect his nation from Muslim migrants, saying: “Migration is like rust that slowly but surely would consume Hungary.”

The anti-immigration campaign has gone down well with many of the roughly two million core voters of Fidesz.

Orbán is expected to continue his economic policies, with income tax cuts and incentives to boost growth, analysts have said.

His business allies are expected to expand their economic domains. Businessmen close to Fidesz have acquired stakes in major industries like banking, energy, construction and tourism, profiting from EU funds.

Soros in his sights

Orbán’s latest target meanwhile is George Soros, the Hungarian-born US financier and philanthropist who helped Fidesz get off the ground and whose scholarship funded Orbán’s time at Oxford in 1989.

Orbán has plastered Hungary with billboards urging resistance to the alleged “Soros plan” of destroying Europe with immigration and the civil society groups that the 87-year-old funds.

For critics, the imagery and language used in this campaign against the Jewish Soros have more than a whiff of anti-Semitism.

Hungary’s enemies, Orbán said in a recent speech “are not national, but international. They do not believe in work, but speculate with money. They have no homeland, but feel that the whole world is theirs.”

Whether Orbán is an opportunist or a visionary is unclear, Andras Schweitzer, senior lecturer at Eotvos Lorand University, told AFP.

“It’s the million dollar question,” Schweitzer said. “Either way lots of people who have met him, including if they don’t support him, notice his ability to understand things very quickly.”

A campaign where Jews were blamed for everything worked once before & led to our darkest age.Worrying that Orbán’s hate-speech is accepted by the EPP. There is an alternative & hope: It’s @MomentumHU that wants Hungary to play a constructive role in Europehttps://t.co/hUAH4xerkB

The problem with Viktor Orban isn't that he is "conservative" or even anti-migrant. The problem is that he has destroyed the media and the courts in his country, that he is corrupt, and that he runs a dishonest propaganda machine which has poisoned public life.