Sunday’s ballot was the first since a 2015 parliamentary election that handed the Law and Justice (PiS) party an unprecedented parliamentary majority and was seen as a key test for the nationalists as they gear up for EU and legislative elections next year. 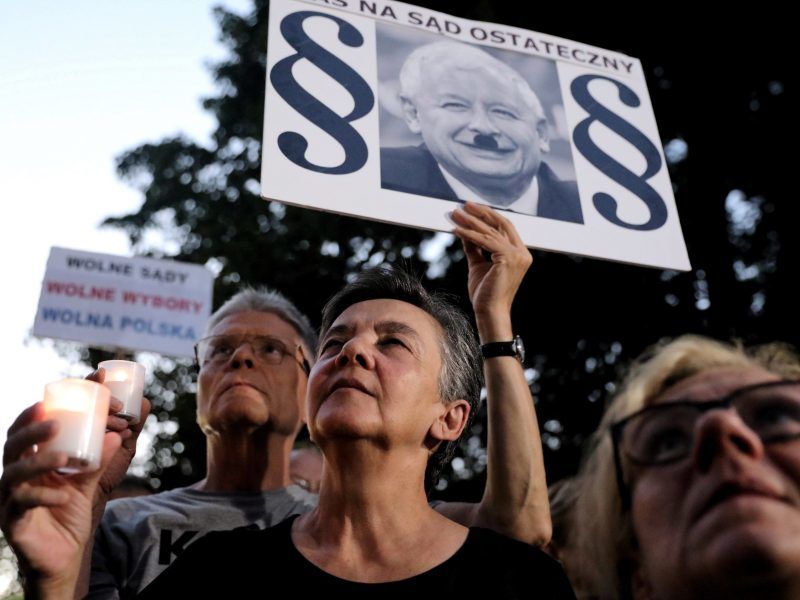 The local elections also took place as the PiS has put Poland on a collision course with the European Union by introducing a string of controversial judicial reforms that the bloc has warned pose a threat to judicial independence, the rule of law and ultimately to democracy.

Exit polls by the IPSOS pollsters showed the PiS winning 32.3% of the vote in regional elections across Poland, beating a centrist-liberal coalition headed by the opposition Civic Platform (PO) with 24.7%.

Riding a wave of popularity driven by robust economic growth and generous social spending, the PiS appeared to make gains in regional assemblies but was unlikely to be able to govern alone in them.

Powerful PiS leader Jarosław Kaczyński hailed his party’s result as a “good omen” ahead of next year’s parliamentary elections.

The PiS currently controls only one of Poland’s 16 regional assemblies and has few if any natural allies.

Exit polls showed in third place the Polish Peasants’ Party (PSL), traditionally strong in rural areas, winning 16.6% of the vote, a result likely to turn it into a kingmaker in coalition-building.

The party has previously teamed up with the PO liberals to govern at the national level and its leader Władysław Kosiniak-Kamysz said Sunday there would be “no such coalitions” when asked whether the PSL would work with the PiS.

Meanwhile in the major cities, the PiS nationalists have failed to top in the mayoral races.

PO liberal Rafal Trzaskowski, a 46-year-old former minister and member of the European Parliament, appeared to have won in Warsaw in the first round of voting with the IPSOS exit poll showing him on 54.1 percent against 30.9 percent for PiS candidate Patryk Jaki.

Impressive result for Rafal @trzaskowski_ Elected Mayor of Warsaw in first round with more than 50% of the vote! https://t.co/Xn1AYeP43C

PO candidates also dominated in the first round vote in Lodz, Poznan, Lublin and Wroclaw.

Mayoral races in Gdansk and Krakow will likely be decided in a second round of voting on 4 November.

The IPSOS exit polls have a three percent margin of error.

Full official election results will be made public on Tuesday evening at the earliest.

Poland’s elections commission pegged turnout on Sunday at over 50%, dubbing it the “highest-ever” for local elections.

Sunday’s vote was held against a backdrop of strong political and social polarisation rooted in the PiS’s controversial judicial reforms.

While PiS voters see the party, especially its leader Kaczyński as a defender of national interests, its critics insist its judicial reforms are unconstitutional and pose the greatest threat to democracy in Poland since the country shed communism in 1989.

A Friday decision by the EU’s top court ordered Poland to “immediately suspend” a PiS-authored law that makes it mandatory for Supreme Court judges to retire at 65, saying that the measure threatens judicial independence.

The decision is the latest salvo in a bitter battle over sweeping judicial changes introduced by the PiS government since it took office in 2015.

The reforms have led the European Commission to trigger unprecedented proceedings against Poland over “systemic threats” to the rule of law that could see its EU voting rights suspended.

Refusing to bow to criticism abroad or mass protests at home, the nationalists have defended the reforms as a key element of their drive to tackle corruption and overhaul a judicial system still haunted by the communist era.