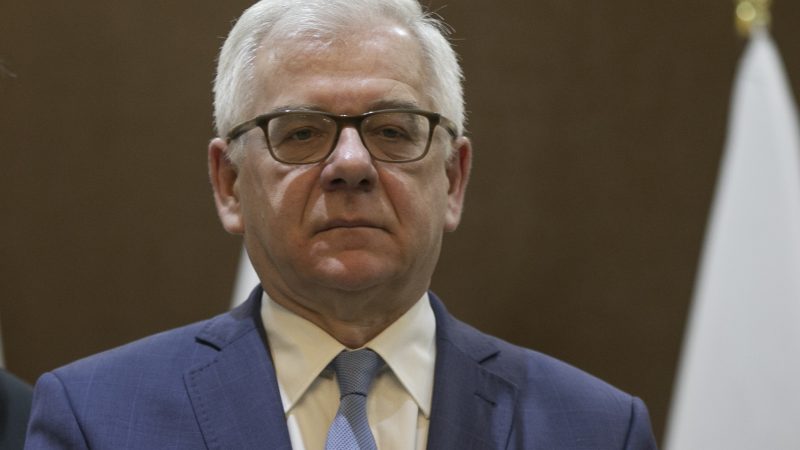 In the game of thrones for the EU’s top job, it was right to distance from the federalist goal of choosing Spitzenkandidaten and instead return to the intergovernmental concept of deciding in the European Council, Polish foreign minister Jacek Czaputowicz told EURACTIV.com.

Jacek Czaputowicz has been Poland’s foreign minister since 2018. He spoke to EURACTIV’s Alexandra Brzozowski in Brussels.

Mr Czaputowicz, we have an EU top job package. But can Poland as the leader of the region be satisfied that there is no Eastern European representation?

It is a pity that Eastern Europe is not represented. However, we should not approach this search for a consensus in a selfish way and we think that bringing about this decision and reaching an agreement is the success of everyone, including us.

Do you expect Ms von der Leyen to be confirmed by the European Parliament tomorrow?

I hope that she will be confirmed, it was an almost unanimous decision of the European Council, one person has abstained. There is a clear consensus about this candidacy and I think that confirmation should be expected and Poland supports this candidacy.

And today’s pending decision on the appointment of Beata Szydlo as European Parliament committee chair could affect the decision?

Well, it really was unexpected. It is, of course, the will of the MEPs, there are certain procedures that say that different political groups have the right to different positions and it is good that this is respected. I think it would be good to just indicate to Polish MEPs that the rules apply to them as well.

Can we understand then that the Polish notion of a German-dominated EU has been overcome and there is hope for an improvement of relations between Warsaw and Brussels?

This actually touches a deeper matter, because I do not see this dominance. There was no such thread. This decision is important for the functioning of the EU, above all what happened, is a departure from the federalist goal of choosing Spitzenkandidaten and returning to the intergovernmental concept and seeking legitimacy in democratically elected governments, and more broadly in parliaments. This is what we have postulated, so it can be decisive as to the further form of the functioning of the EU. But it is not because of Poland that this departure has taken place. Mr Weber has not been accepted by other countries, and this has an essential, constitutional significance regarding the shape of the EU.

On the other hand, the person as such is accepted, because she is a person known to be consultative, seeking agreement, expressing understanding, and not confrontation, and in that sense, I think she has a chance to get support.

She is, of course, German, but this has never been a hindrance when it comes to Poland. Germany is an important member state, the largest and with significant influence. We work very intensively with Germany on many foreign policy issues, for example, we organized in Poznan two weeks ago the Western Balkans summit, the Berlin process in cooperation with Germany. We work together in other areas and I often meet with Mr Maas, we are debating the future of the EU, and there is a certain convergence.

I think that she will also have an understanding of the problems that occur in our part of Europe. She is more open to the East, in German politics there is a greater understanding of Central Europe, Western Balkans, Eastern Partnership – we have a similar vision of the EU in many aspects.

The failure of Frans Timmermans’ candidacy has caused relief in Warsaw. However, von der Leyen has argued for conditionality linked to the rule of law. What will the dispute over the rule of law look like with the next Commission?

The Court of Justice sometimes agrees with the Commission’s proposal, sometimes it does not. Article 7 states that it is the Council who decides whether there is a risk of a serious breach of European Union standards, and the Council did not state this. There was no such decision for now. To our knowledge, the Council will not find it, because it does not share the expectations of the Commission, so the matter is rather a problem for the Commission.

So the Polish objection is tied solely to the position of Mr Timmermans?

Some objections to him arise from the fact that he played a political role, for political purposes he sustained the problem in order to gain the support of his supporters. And in recent months, he often visited Poland but he did not meet with the authorities, he did meet me earlier, but recently he did participate in rallies supporting the opposition, effectively supporting former communists.

You can accuse him of this non-objectivism. A Commissioner should be apolitical, politically neutral, this political commitment and a departure from this neutrality is simply his political interest mixed with the interest of the European Commission and we see the problem here. If this is analysed with objective political emotions, we can stay calm. Because we maintain that our system is independent, there is a balance of power and all EU standards are respected. An objective look is needed here. And in this sense, the new Commission could have a more sober view.

But it is quite clear that Mr Timmermans will most likely stay on the same portfolio.

We think that as far as Article 7 is concerned, it is his problem and the Commission’s problem because this article provides for a procedure, namely that the Commission may ask the Council to identify a serious threat to standards or compliance with the rule of law. The Commission did not do this and you have to ask him why it did not perform that. I can say from my perspective, it did not occur, because it knows that its rating is not shared by the member states, it did not put it to the vote, we do not mind, we can ask only one thing: please respect the Treaties. The treaty decides who finds violations. Please do not say that you do not follow standards until this procedure decides.

The Commission can sometimes make mistakes and sometimes it is wrong. And it looks like the Commission did not convince the member states. That’s why it did not put it to a vote. This is really the problem of the functioning of the Commission rather than of Poland. We are ready to present arguments here and we keep doing it. I do not know why the Commission, for a year and a half, did not follow this treaty. We hope that the new Commission will act.

Ms von der Leyen also called for a more ambitious agenda on climate change, goals that were rejected at the last EU summit, among others by Poland.

In general, we are supporters of decisive actions in terms of climate protection, but we are looking at it realistically. Poland organized COP24 in December and we managed to reach an agreement on a global scale and I think that this is the right path. We think that first, you have to look at it from the perspective of financing and the consequences for the economy. Such a quick reaction to the results of the European election seems to be that the factor may be more ideological: Greens have gained support, so let’s show something from our side and this is not serious. In a sense, we must investigate, we can not act in such serious matters, we must accept real agreements.

However, we are open here, of course, there is the issue of modernisation of the industry, in particular in Poland, where this energy mix is ​​based on a large amount of coal and investments in clean technologies are expensive. You need to look at how real it is, the point is that the EU does not lose its own competitiveness will set some ambitious targets, while other states China, the United States, here will not move forward. The effects of this may be bad because then the industry can move there and the pollution will be the same. We can not say that the air over Europe is clean and over China it’s not. After all, the air mixes, isn’t this obvious?

As there have been no decisions on Poland’s Commissioner picks yet, what portfolio would Poland like to call its own in the next term?

We haven’t heard much about enlargement yet either. At the Western Balkan summit in Poznan, you said we have to be realists. Was it a mistake that the EU decided to postpone accession talks with North Macedonia and Albania?

Yes, it can be perceived as a mistake. We are supporters of a strong signal for these European countries and want them to mobilise for further reforms. And we know from our experience, our negotiation talks, that it is this talks that are such a mobilizing moment. I want to say immediately that, of course, we see that there are problems in these countries, but we are opening negotiations and are not accepting them into the EU right away. Therefore, postponing this decision was not good, but I hope in October this decision will be accepted.

We must also show our openness, it is also an ethical duty because these countries also have the right to apply to Europe. Of course, they must meet criteria while conversations may serve this purpose. Anyway, they did a lot, North Macedonia changed its name, settled relations, etc. The second issue is this geopolitical dimension, there are actors who want to be active and through starting negotiations, those who have interests contrary to the EU’s interests – Russia, Turkey, China – loses the argument. Later it may be more difficult, and this may result in threats for the EU as a whole.

One response to “Polish FM: Council was right to kill federalist Spitzenkandidaten”