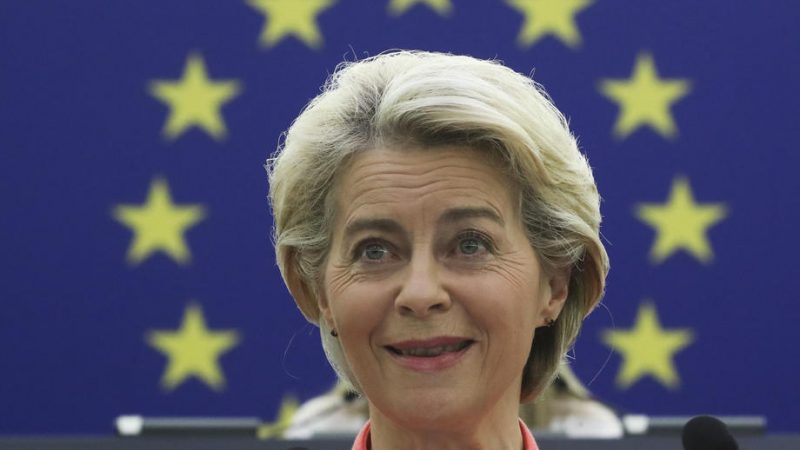 Marisa Matias, from the Left Bloc, heard a speech that "bypassed" the issues "that really matter", saying that there was "an approach of pretence" regarding those that were treated. [EPA-EFE/YVES HERMAN]

Portuguese MEPs were sharply divided in their appreciation of the state of the Union speech presented on Wednesday (15 September) by the President of the European Commission Ursula von der Leyen in the European Parliament. EURACTIV’s partner Lusa reports.

PSD MEP Paulo Rangel told Lusa he had heard an “intelligent” speech, in which von der Leyen gave a “very positive” picture of the Commission’s performance, highlighting the references to the vaccination process against COVID-19 where, “with all the merit”, the “European strategy was successful”.

Marisa Matias, from the Left Bloc, heard a speech that “bypassed” the issues “that really matter”, saying that there was “an approach of pretence” regarding those that were treated.

In statements to Lusa, Marisa Matias gave as an example of this “pretence”, the way Von der Leyen spoke of the economic recovery of the European Union, but “ignoring that the deficit rules are in suspension”, which has allowed financial relief for many countries, without the President of the European Commission explaining what will happen in the short run.

João Pimenta Lopes, MEP elected by the PCP, deeply criticised the whole State of the Union speech, particularly the way von der Leyen praised the performance of the Commission in the vaccination process, stressing that what remains is what he considers to be “the continuity of stubborn posture in defending multinationals”, namely with the insistence on protecting the patents of vaccines against COVID-19.

This was not the spirit in which Carlos Zorrinho, MEP from the Portuguese Socialist Party, listened to the President of the European Commission, saying that she showed “proof of sensitivity to the sense, integrity and relevance” of the EU.

However, “for our values and our future, we will have to be more ambitious and pragmatic,” considers Zorrinho, explaining that what is missing, for example, is an anti-poverty law “that consolidates and deepens the objectives of the Porto declaration” about the recent Social Summit.

CDS MEP Nuno Melo also approved the way the Commission president referred to the EU’s role in the worldwide distribution of vaccines against COVID-19 but would have preferred to hear more about the community’s medium and long-term economic strategy, particularly to understand better what to do with the distribution of community funds.

Paulo Rangel highlighted the “optimistic vision” that von der Leyen brought to the economic discourse, but noted that there was a lack of talk about the price to be paid for the recovery and resilience plan, in particular the eventuality of a rise in inflation, just as there were no references to EU fiscal and economic policy, such as defining future debt targets.

Francisco Guerreiro, independent MEP (ex-PAN) of the Greens family, heard a “moderate and cautious speech” but criticised the lack of depth on many issues dear to him, such as environmental policy, as well as the absence of fundamental issues such as the Common Agricultural Policy.

Marisa Matias also felt there was an “empty speech” on the issue of migration, claiming that the Commission president limited herself to vague ideas, referring to the role of the European Parliament, just as she also said she did not understand why von der Leyen stressed the announcement of a defence summit when this issue is not on the EU’s priority agenda.

On the contrary, Paulo Rangel considers that on the issue of defence, von der Leyen was “assertive” on the importance of reinforcing close collaboration between the EU and NATO – a point heavily criticised by the communist and left bloc MEPs, as well as Francisco Guerreiro.

The President of the European Commission spoke on Wednesday in the European Parliament in Strasbourg in the State of the Union address, where she took stock of this year and projected the priorities for 2022.

The first State of the Union address was given by the then President of the Commission, José Manuel Barroso, on 07 September 2010, a practice followed by his successor, Jean-Claude Juncker, and by the current head of the Community executive.