The decision to appoint Carlo Cottarelli to form a stopgap administration sets the stage for elections that are likely to be fought over Italy’s role in the European Union and the eurozone, a prospect that is rattling global financial markets.

The eurozone’s third-largest economy has been seeking a new government since inconclusive March elections, with anti-establishment forces abandoning efforts to form a coalition at the weekend after a standoff with the head of state.

President Sergio Mattarella vetoed the parties’ choice of a eurosceptic as economy minister, prompting the 5-Star Movement and far-right Lega Nord party to accuse him of betraying voters.

Both parties dropped drop their plan to take power, switched to campaign mode, and 5-Star called for street protests against the president’s rejection of their nominee, 81-year-old Paolo Savona, who has argued for Italy to quit the eurozone.

Cottarelli told reporters after his appointment that elections would be held in the autumn or early next year. He also tried to reassure investors on the Italian economy.

“Speaking as an economist, in the past few days tensions on the financial markets have increased,” said Cottarelli, who had served as a cost-cutting tsar to a previous government.

“Nonetheless the Italian economy is still growing and the public accounts remain under control.”

The prospect of fresh elections raised fears among investors that the vote could become a de facto referendum on Italy’s euro membership. The euro touched a fresh six-month low and yields on Italian debt climbed, increasing the extra borrowing costs or spread that Italy pays in comparison with Germany.

#5Stelle and #Lega are very likely going to win another 15% in new elections, almost all of the MP seats that are directly elected! #DiMaio #Salvini #Savona #Italy #Mattarella https://t.co/juCwWY30Iw

A 5-Star source said it was considering an election alliance with the League. In March, 5-Star ran its own campaign while the League campaigned as part of a right-wing coalition with the party of former prime minister Silvio Berlusconi. 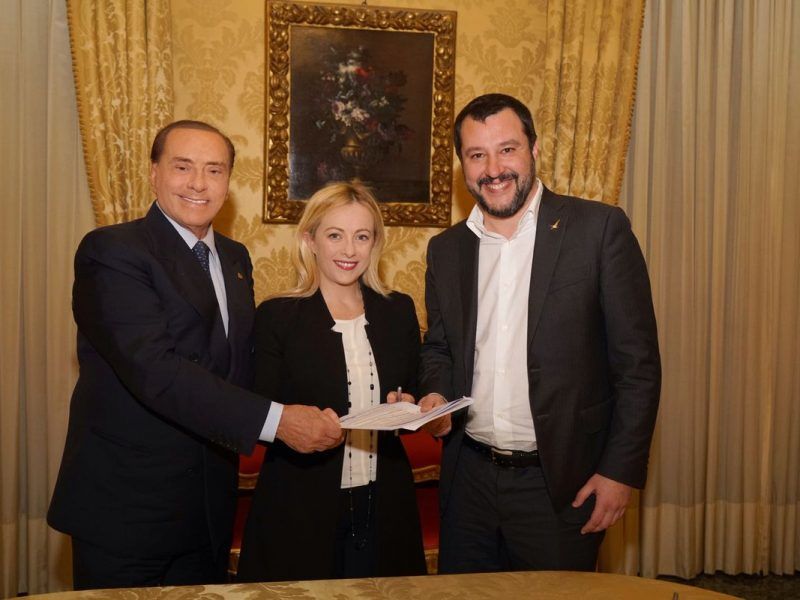 “This is not a democracy, this doesn’t respect the popular vote,” League chief Matteo Salvini said after Cottarelli accepted his appointment by the president.

Salvini characterised the move as the death throes of a political establishment intent on keeping Italy “enslaved”, and afraid of the reaction of financial markets.

“The next elections will be a plebiscite — the population and real life against old political castes and the ‘lords of the spread’,” he said.

Salvini is tapping into a belief among many Italians that EU fiscal rules are rigged against Italy, even if many voters do not want to exit the euro.

“The euro has to stay, but we have to make our voice heard,” said Roberto D’Amelia, 68, a bar owner in central Rome.

At a Rome market, others criticised 5-Star and the League.

“I am a mother of a boy who has to travel the world and so I am convinced an anti-European minister is not the right thing for Italy,” said shopper Irene Teramo.

Cottarelli must try in the coming hours to form a government with majority support from parliament. He seems almost certain to fail, at which point the president would swear in him and his proposed cabinet, to serve until the next election.

He has been tasked with passing the 2019 budget by the end of this year, a challenge that may prove impossible without the confidence of parliament. In those circumstances, elections could be held as soon as September.

In a televised address on Sunday, Mattarella said he had rejected Savona, the coalition’s candidate for the economy portfolio, because he had threatened to pull Italy out of the eurozone.

“The uncertainty over our position has alarmed investors and savers both in Italy and abroad,” Mattarella said, adding: “Membership of the euro is a fundamental choice. If we want to discuss it, then we should do so in a serious fashion.”

The League and 5-Star, which had spent days drawing up a coalition pact aimed at ending a two-month stalemate, responded with fury to Mattarella, accusing him of abusing his office.

“Last night was the darkest Italy’s democracy has ever seen,” Di Maio said. “The truth is they don’t want us to take power.”

The 31-year-old said the anti-establishment group would organise rallies across Italy, including in Rome on 2 June.

Extraordinary intervention from M5S leader Di Maio: basically says the president is a liar, they’ve never wanted to leave the euro (not true https://t.co/G97HKWdSzL), invites voters to put an Italian flag out their windows and rally in Rome (…) on 2 June https://t.co/vnLIwCHlxu

“Make some noise, it is important that we do so all together,” Di Maio said in a live address on Facebook in which he reiterated the group had never planned for Italy to quit the euro.

“If there’s not the OK of Berlin, Paris or Brussels, a government cannot be formed in Italy. It’s madness, and I ask the Italian people to stay close to us because I want to bring democracy back to this country,” he told reporters.

“We need to keep cool. Some things cannot be done in the throes of anger … I don’t want to talk about impeachment,” he told Radio Capital.

The political chaos in Italy after the collapse of a bid by two populist parties to form a government sparked strong reactions across Europe on Monday.

French President Emmanuel Macron praised Italian counterpart Sergio Mattarella, saying he was fulfilling his role as guarantor of the country’s institutions with “courage and responsibility”.

“I reiterate my friendship and support for President Mattarella who has an essential task to undertake, (ensuring) the institutional and democratic stability of his country, which he is doing with a lot of courage and responsibility,” said Macron, after Matterella rejected a eurosceptic nominee for economy minister putting an end to the populists’ bid to form a government.

German Chancellor Angela Merkel’s spokesman Steffen Seibert said Berlin’s “respect for Italian democracy and democratic institutions requires us to wait and see which government will lead the country and which ideas it will present to its EU partners”.

“The German government is always ready to work well and closely with an Italian government – that is our fundamental stance,” he added.

Germany’s EU commissioner Günther Oettinger called for eurozone partners to do what they could to convince Italian voters of the value of the single currency by exercising “positive influence on decision-making” in Italy, the DPA news agency said.

“Italian voters will be furious that the establishment is blocking new ministers. Time for more elections and bigger votes.”

French far-right leader Marine Le Pen joined in the outrage over Mattarella’s veto of arch eurosceptic Paolo Savona as economy minister. She accused the president of a “coup d’état”, saying the “European Union and financial markets are again confiscating democracy”.

What’s happening in Italy is an absolute democratic outrage & shows EU will trample over all democracy to protect its tottering Empire & Euro. First they parachuted in Monti as PM 2011-13, a technocrat & ex EU Commissioner, now they parachute in Carlo Cottarelli, ex-IMF economist