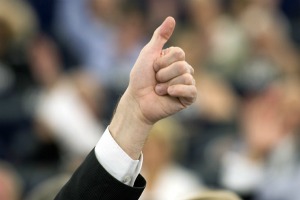 From legalising same-sex marriage to guaranteeing media pluralism, a dizzying array of petitions is being prepared to suggest new laws to the European Commission under the new European Citizen's Initiative.

As part of the Lisbon Treaty, citizens will be able to officially register their initiatives with the Commission from 1 April. If they receive 1 million signatures in support from at least seven countries, this will force the Commission to consider initiating legislation.

One such initiative is being prepared by the European Federation of Public Service Unions (EPSU) to prevent the privatisation of water and sanitation providers.

Pablo Sánchez Centellas of the EPSU said that as the Commission has pushed for the privatisation of utilities in the past, they are confident of the legal validity of their initiative. He said that other requirements, including following data protection rules and validating signatures with national authorities, could present practical difficulties.

“The technical stuff is complicated and never tested before, so it is difficult to say whether it will work, but there is almost no facilitation by the European Commission to the national entities," he said. "It is like many things in Europe: just an adding up of national things.”

Many organisers may find it a challenge to have their initiatives validated. Tony Venables, director of the European Citizen Action Service, a pressure group, said there was often a tension between ambitious goals and what the EU is permitted to suggest under the treaties.

"Often what you want as an organiser is something which is idealistic, capable of grabbing people's attention so they will sign readily. The difficulty is when you start to involve hard-headed legal practitioners on the competence issue," he said.

In some cases, such as the campaign for a single Parliament seat in Strasbourg, this would clearly contradict EU treaties and thus likely to be void. However, Venables said typically the legality of initiatives would be more ambiguous.

"I don't think there are so many cases of ECIs which are completely outside of the EU treaties, but to be within the competences they have to take a rather narrow angle on it," he said. On same-sex marriage, he suggested an initiative could take the form of ensuring mutual recognition of partnership rights as a part of freedom of movement.

Even if the Commission proposes a directive as sought by initiative organisers, this would only begin the EU's lengthy legislative process, meaning it would typically be reviewed by the European Parliament and the member states.

Although the Commission is not compelled to react positively to a given initiative, some organisers see it as a useful way of attracting attention to an issue and pressuring policymakers.

The environmental group Greenpeace was the first to take advantage of the citizens' initiative. In October 2010, it received 1 million signatures for a petition to ban genetically modified organisms across the EU. The Commission put it aside, however, as it had yet to formally spell out the rules for a successful initiative.

Greenpeace spokesperson Mark Breddy indicated the group was in no hurry to propose another initiative after 1 April. "The Commission knows that if we did the petition this year or next year the result would be exactly the same," he said.

Breddy argued that the signatures had put pressure on EU institutions during the drafting of a bill to re-nationalise GMO authorisation and influenced the decision of German chemicals firm BASF to withdraw GM crop research from Europe.

Greenpeace is likely to use citizens’ initiatives in the future, Breddy said, but this would partly depend on if it proves to be an effective way of influencing EU decisions.

"There's a democratic gap in Europe and the European citizens' initiative is a way to get Europeans more directly involved with the European Union and policymaking. It's, however, a very complex tool, takes a lot of organisation and we don't exactly know how it's going to work yet."