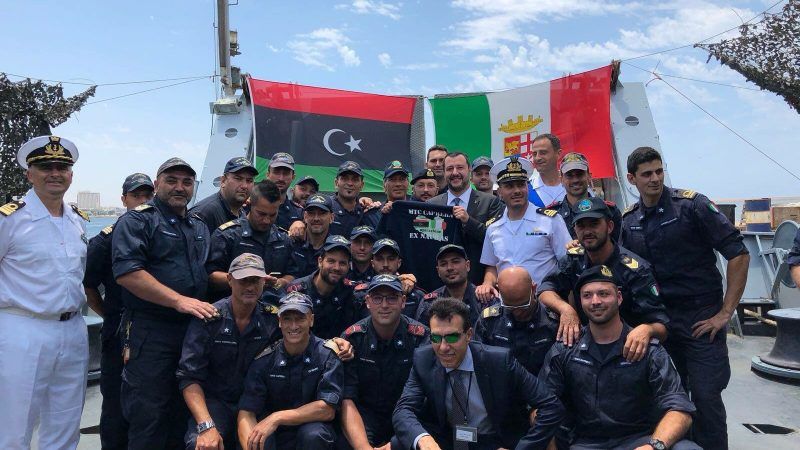 Salvini in Libya, with the crew of the Caprera military ship that took him there. [Website of Matteo Salvini]

Italy’s pugnacious new government took its fight to block migrants to Libya on Monday (25 June) as a new boat with hundreds on board remained stranded at sea, deepening a crisis shaking Europe.

With European leaders at each other’s throats over the large number of migrants arriving from North Africa, Italy’s far-right Interior Minister Matteo Salvini paid a surprise visit to Tripoli.

There, he called for the establishment of processing centres in various unnamed African countries to deal with potential migrants in a move “to help Libya as well as Italy block migration”.

Libya is a key departure point for thousands of migrants hoping to reach Europe, although hundreds drown each year attempting the crossing.

Salvini’s unexpected trip came a day after emergency talks between 16 European Union leaders in a bid to break a longstanding deadlock over who should take in the migrants, the bulk of whom have been landing in Italy and Greece.

The crisis came to a head earlier this month when Italy’s new populist government turned away a rescue boat carrying 630 people, which was also rejected by Malta, forcing the vessel to remain at sea until Spain offered them safe haven.

But the relief was short-lived, with Italy and Malta refusing a second vessel carrying 234 migrants who were rescued on Thursday.

“Let’s see if Europe remembers that it actually exists because there is still a boat loaded with migrants in Maltese waters waiting for a port to welcome it and we can tell you again, it won’t be in an Italian port,” Salvini said.

However a Danish cargo ship owned by Maersk, the world’s leading container shipping company, with 108 migrants on board was allowed to dock at the southern Sicilian port of Pozzalo after waiting offshore for three days for instructions from the Italian authorities.

It had changed course early Friday to help 113 people off of Libya, of whom five including four children and a pregnant woman disembarked in Sicily.

Danish Immigration Minister Inger Stjoberg said earlier she would send a letter to Salvini to ask him to act on their situation.

Ramping up the rhetoric, Salvini earlier warned foreign charities to stop rescuing migrants off Libya, accusing them of “causing trouble” and saying Italian ports “are and will be closed to those who aid human traffickers.”

His remarks came as Libya’s coastguard said it had rescued nearly a 1,000 people on Sunday, and Spanish authorities said they had picked up more than 600 others off their coast on Monday.

Salvini has insisted Italy will not take in “one more” refugee, vowing to close its ports to all foreign-flagged rescue ships and demanding that Europe shoulder the burden, warning the migration crisis could threaten the bloc’s future.

“We will jointly support, with Libyan authorities, the setting up of reception and identification centres south of Libya, on the external border of Libya, to help Libya as well as Italy block migration,” Salvini told a news conference in Tripoli.

Ahmed Maiteeq, deputy head of the Government of National Accord (GNA), said Libya would host a migration summit in September.

Earlier, he told Italy’s La Repubblica daily that Europe “must think of structural measures to take in African countries to stop migrants.”

On his return to Rome, Salvini said a technical team would be set up this week with representatives from Italy, Niger, Chad and Mali.

He dismissed calls by France and Spain for asylum-seekers to be kept in closed centres until their claims are processed — a proposal Rome fears would turn Italy into “a refugee camp for all of Europe”.

“Welcome hotspots in Italy? It would be a problem for us and for Libya itself because it would not stop these deadly waves (of migration). We have proposed reception centres south of Libya to avoid Tripoli becoming a funnel, like Italy,” he wrote on Twitter.

“The only way to really counteract the traffickers’ criminal interests and avoid these voyages of death is to stop these boats putting out to sea,” he added in a separate statement.

The crisis has seen France’s Emmanuel Macron accusing Rome of “irresponsibility” for turning away the boats, and Italy denouncing Paris for its hypocrisy in pushing migrants back across their shared border.

In Germany, Chancellor Angela Merkel is facing an ultimatum from her hardline interior minister who has given her until the end of June to find a European deal to curb new arrivals.

Sunday’s emergency EU leaders meeting had aimed to clear the air between member states ahead of a scheduled full summit on Thursday and Friday.

Both Macron and Merkel have vowed to forge ahead with like-minded leaders on ways to reduce migrant flows, but the EU’s top migration official warned that Europe would solve the crisis only by working together.

“We must find a way to adopt a shared policy and a shared strategy to face this situation, otherwise the European project is in danger,” Dimitris Avramopoulos told AFP on a visit to Tehran.