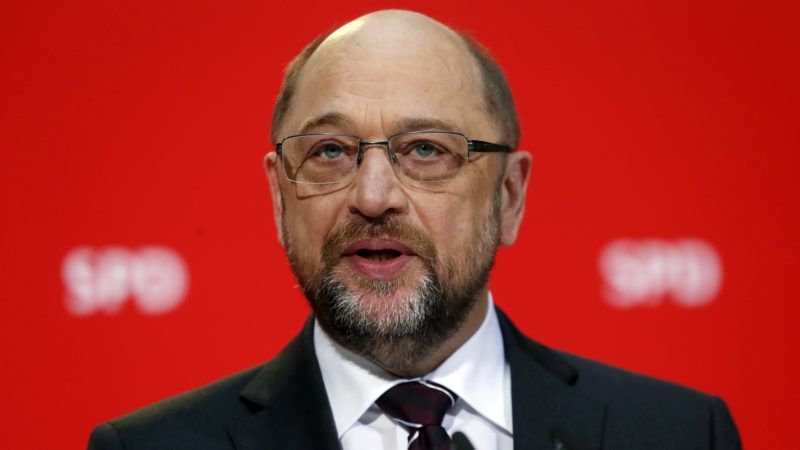 The leader of the German Social Democratic Party (SPD), Martin Schulz, speaks during a press conference in the party's headquarters in Berlin, Germany, 4 December 2017. [Felipe Trueba/EPA/EFE]

The head of Germany’s Social Democrats, Martin Schulz, said on Monday (4 December) he had been urged by French President Emmanuel Macron and other European leaders to join Chancellor Angela Merkel’s next government and push for EU reforms.

If his centre-left SPD joins another governing alliance with Merkel’s conservatives or allows her to run a minority government, “it won’t be business as usual” in Berlin, vowed Schulz, the former president of the European Parliament.

Schulz said he had been encouraged by European “sister parties” and some leaders, including Macron, to join Merkel’s fourth government and help promote European reforms.

“The phone conversations I’ve had so far … and the exchange of mails and text messages have been unanimous,” he told a Berlin press conference.

The core message, he said, was that Germany should adopt “a progressive, a more social, a more dynamic policy on Europe”.

“We take their message very seriously,” said Schulz, a vocal critic of Berlin’s tough austerity stance during the eurozone crisis when creditors demanded tough reforms from crisis-hit economies in return for international bailouts.

Macron has pushed for sweeping reforms, including a common eurozone finance minister and budget – an idea that has received a lukewarm response from Merkel’s conservatives who fear it could cost the top EU economy dearly.

Schulz lost to Merkel in the 24 September elections and initially vowed to take his party into opposition but has now emerged as the man who could hold her political fate in his hands.

To be or not to be in a grand coalition: that is the question. Initially rejected by SPD, a grand coalition now looks like the only chance to solve Germany’s problems, which can in turn give a boost to the much-needed post-Brexit EU reforms.

After Merkel’s exploratory talks to form an alliance with two smaller parties collapsed, her conservatives are hoping for a continuation of their previous “grand coalition” with the SPD for the next four years.

Schulz has asked his divided party to back him in open-ended discussions on whether the two parties should team up again, and on what terms, to avoid new elections.

Martin Schulz says he received a call from Alexis Tsipras last week, "encouraging" him to take a role in forming next German government. Expect to hear this more often if SPD forms another grand coalition

Schulz said that left-leaning European parties and Macron’s government, looking to Germany, “have a great interest in seeing an end of the blockade of necessary eurozone reforms, seen especially in the finance ministry”.