Tajani speaks at the “State of the Union” conference in Florence . [@EP_President Twitter]

Tajani, a politician from Silvio Berlusconi’s Forza Italia, was seen until recently as the prime minister of a new Italian government, capable of reassuring the rest of the EU thanks to his strong European credentials. 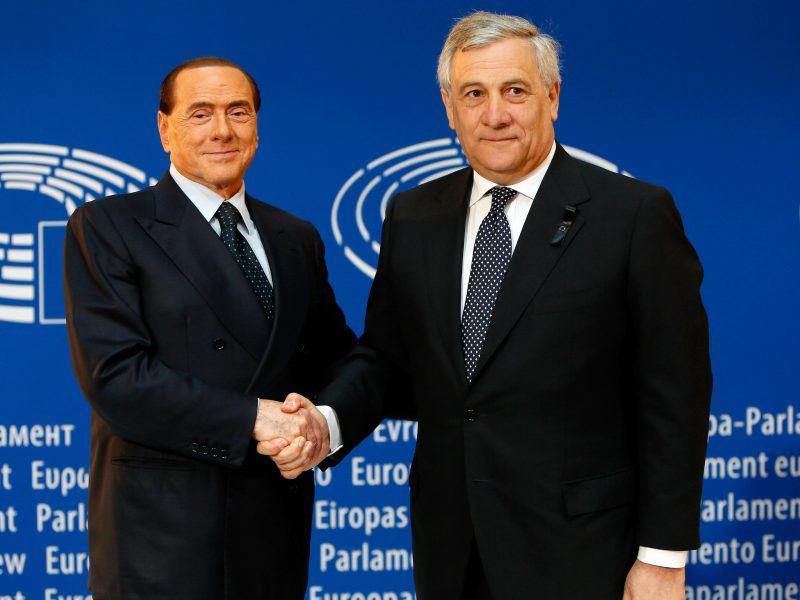 Tajani agrees to be Berlusconi's PM choice ahead of Sunday's vote

However, the latest twist of events excluded Tajani from such a scenario. The far-right Northern League had run in the elections in coalition with Forza Italia. However, a coalition between the League and the anti-system 5-Star Movement became only possible after Berlusconi’s Forza Italia agreed to accept not to be part of the future cabinet.

The anti-establishment 5-Star Movement and far-right League have made “significant steps” towards forming a government, the two parties said Thursday (10 May) as Italy looked to end nine weeks of political deadlock.

A majority of Italians are supportive of the EU, but less so of the common EU currency, as its introduction in Italy had led to price hikes and is seen as the main reason for the economic crisis.

The idea of holding a referendum for leaving the euro was one of the main political ideas of Beppe Grillo, the former comic who has built the 5-Star Movement into Italy’s largest political force.

Northern League leader Matteo Salvini has also said that the euro was “a mistake” for Italy’s economy. Salvini advocates renegotiating European treaties and insists the single currency is doomed to fail.

The leader of Italy’s anti-establishment 5-Star Movement took his campaign for a referendum on the euro to Brussels on Wednesday, holding out the prospect of cooperating with other anti-euro parties.

The League wants to exit the euro as soon as politically feasible. Luigi di Maio, the new 5-Star leader, has said such referendum would take time to organise and tackling poverty in Italy was more urgent.

He later added it was “irresponsible” to even imagine a referendum for leaving the euro and warned that in such a scenario, there would be repercussions in the entire EU and its 500 million people.

He also compared an exit from the euro to the Argentina crisis of the early 2000s, when the country defaulted on its external debt.

The Greek crisis was an eye-opener for realising that EU treaties haven’t provided for a procedure for exiting the euro. Legally, if a eurozone country leaves the euro, it would leave the EU as well.

Commission President Jean-Claude Juncker also spoke at the event but made no mention or allusion to Italian politics in his 36-minute speech.