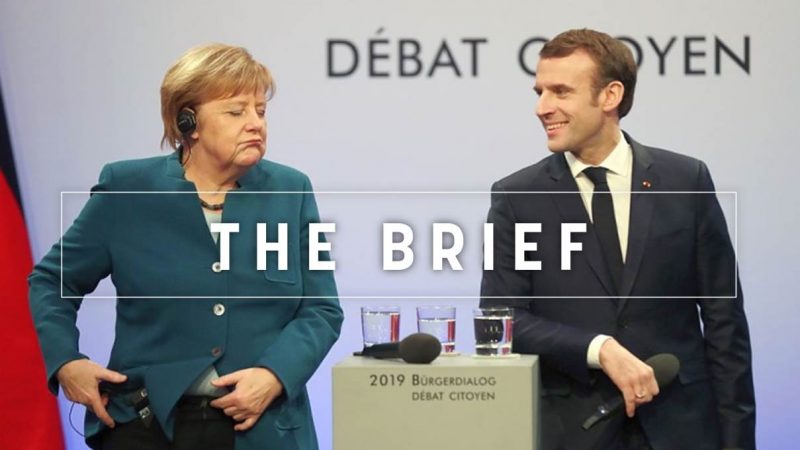 In the last couple of weeks, the love-in and gestures of friendship between France and Germany have suddenly stale.

Merkel has ignored Macron’s calls for European reform in his Sorbonne speech; French criticism of the German-Russian natural gas project Nord Stream 2, and Macron’s rejection of a joint appearance with Merkel at the Munich Security Conference are unmistakable signs of a rift in the Franco-German tandem.

It sends the signal that something is wrong in the German-French relationship. And it might not only be for a couple of days.

As the two meet in Paris this afternoon to discuss European and bilateral matters, it would be an opportune time for some hard talk on ticking points in the German-French relationship. In addition to the potential delays to Brexit, economic, financial as well as foreign and defence policy will dominate the talks.

In truth, there are substantial policy divisions between them.

Although a basic agreement on a eurozone budget was reached between Paris and Berlin where Germany would like to see payments from such a money pot linked to structural reforms in individual countries, the talk of a finance minister for the eurozone has gone quite for some time. It is also unclear if the Franco-German agreement on the eurozone is strong enough to break the resistance of at least eight other EU countries, especially the Netherlands.

Berlin has handled the dispute over the Nord Stream 2 gas pipeline clumsily. Meanwhile, France has only grudgingly accepted that Germany initially does not support EU digital tax. The two governments’ definition of what a ‘European army’ or ‘Army of Europeans’ should look like, are also far apart go far apart.

But as if that was not enough, this week saw a major point of controversy with arms exports to Saudi Arabia.

Germany imposed an export ban following the assassination of Jamal Khashoggi, while NATO partners such as Britain and France, on the other hand, continue arms deals with the kingdom. Since France and Germany had recently agreed to cooperate even more closely in the development and production of armaments, Paris has not been amused. A common European defence industry, so the French argument goes, makes little sense as long as the Germans take a stricter attitude to where their exports go than their partners.

After 14 years in office, Merkel is on her fourth French president: Chirac was a French version of her party patron Kohl, Sarkozy’s hyperactivity and impulsiveness made him the polar opposite of Merkel, and Hollande was never her political equal.

And with Macron? As the Queen of Europe slowly approaches the exit, the Crown Prince is in trouble, it seems.

The truth is, when it will come to serious decisions, Merkel will as she usually does, pull herself together. But she knows that Franco-German compromise has always been the engine of European integration, and Germany will never countenance European leadership alone.

As Brexit approaches relentlessly, the EU is a driving force in supporting peace in Northern Ireland. Read our on-the-ground-report from along the Irish border.

The risks related to the US-China trade war, a disorderly Brexit or the Italian economy could worsen the deceleration of the European economy, the European Commission says and urges member states to reform their economies.

As MEPs support Romania’s former anti-corruption chief and one of the three shortlisted candidates, Kövesi, for EU’s first-ever chief prosecutor, they set themselves on a collision course with the member states, which had opted for her French rival.

China’s cybersecurity law allows the state to conduct foreign espionage projects and is a ‘loaded gun’ the rest of the world should not want to stand in front of, a senior US official says.

EU copyright rules, meanwhile, are on the brink of a radical overhaul after lawmakers in the European Parliament’s legal affairs committee provisionally backed the plans.

Egypt hit back at Turkish criticism of EU leaders for meeting their Arab counterparts in the Red Sea resort of Sharm el-Sheikh just days after Cairo executed nine people.

Missed the latest news from around Europe this morning? Have a look at today’s edition of The Capitals with the German far-right wining a case against the country’s intelligence agency, a Brexit extension on the cards and candidates for the Commission.