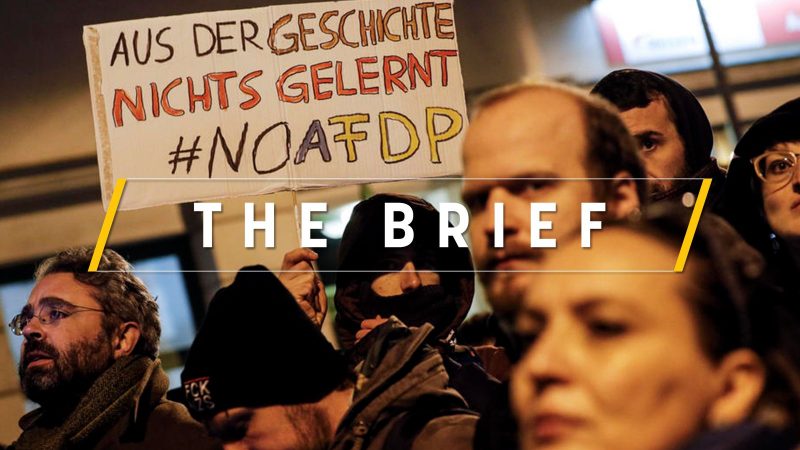 Taking to the streets to protest, make your voice heard and your message as visible as possible is not only a prerogative of the French.

The spontaneous citizen mobilisation in Germany that followed the election of FDP candidate Thomas Kemmerich thanks to the votes of the far-right AfD helped to expose what the political sphere still tries to hide: that the border between so-called democratic parties and the far-right has become very porous.

Let us remember: A few hours after Kemmerich became Thuringian Minister-President, thousands of people went to the streets across Germany to protest. They gathered in several Thuringian cities, as well as in Berlin, Hamburg, Cologne, Leipzig, Düsseldorf and Munich.

“Not my Prime Minister” and “Who betrayed us? Free Democrats!” their signs read.

That German citizens take to the streets – peacefully but firmly – means a great deal to a country that has turned the search for compromise into a real political art. This way of doing things profoundly influenced the political landscape of what has been called the “Bonner Republik”.

With the Social Democrats in the SPD, the conservatives in the CDU and the liberals in the FDP all in the throes of internal crises, we are witnessing the crumbling of what was (and to some extent still is) the very foundation of the Federal Republic of Germany.

In the face of the turmoil left behind by the traditional political sphere, the street seems to be the most effective way of making one’s voice heard.

The link between political representatives and citizens is increasingly unravelling, the street is increasingly compensating for it. And the Germans are not alone, as the ‘sardine’ movement in Italy shows.

With his defeat in the regional elections in Emilia-Romagna, Lega leader Matteo Salvini had to bury his national claim to power after the Left won thanks to the young citizens’ movement.

The ‘sardine’ movement, founded just a few months ago, has succeeded in mobilising large numbers of left-wing voters with its flash mobs organised via Facebook: voter turnout in Emilia-Romagna was 67%, almost twice as high as at the last ballot.

Before the ‘sardines’ held their first rally against right-wing populism, hate speech and racism in Bologna on 14 November, the PD candidate Stefano Bonaccini for Emilia-Romagna was still six percentage points behind the Lega candidate in the polls.

After more than a hundred flash mobs of “sardines” all over Italy, Bonaccini won on the election night with an almost 8 percentage point lead. The vice-president of the PD, Andrea Orlando, declared on Monday: “The ‘sardines’ woke us up, they were decisive. There should be a monument to them.”

Battles can be won in the street, that is clearer than ever before. This is why more than 10,000 people are expected in Erfurt, Thuringia’s capital, next Saturday.

Under the motto “#not with us – no pact with fascists: never and nowhere!”, the alliance #indivisibly calls for a large demonstration. Groups from more than 30 cities have already announced their participation.

But while Erfurters are looking forward to five-digit numbers of participants, organisers in Dresden, the capital of Saxony in Germany’s far east, are worried about not attracting enough people onto their streets on Saturday.

The reason is simple, yet scary: because one of the largest neo-Nazi marches in Europe is taking place in Dresden at the same time as the demonstration in Erfurt.

Every year, around 13 February, Dresden becomes the meeting place for the right-wing extremist scene. This day marks the 75th anniversary of the city’s bombing by the Allies and observers assume that it will attract a particularly high number of right-wingers to the city. They, too, are only too aware of how important it is to take to the street.

The European Commission kept unchanged its economic forecast for moderate eurozone growth for this year and 2021 despite the impact of looming risks, especially the coronavirus.

Oil and gas giant BP set one of the oil sector’s most ambitious targets for curbing carbon emissions as its new boss launched the biggest revamp in the company’s 111-year history.

Six cabinet ministers resigned or were sacked from Boris Johnson’s government in a surprise ministerial reshuffle on Thursday as the maverick prime minister asserted his dominance in the post-Brexit United Kingdom.

Janusz Wojciechowski, the EU’s agriculture Commissioner, wants to crack down on the environmental impact of intensive animal farming, but apart from support from animal welfare groups, his calls have so far met with mixed reactions.

The Commission and Parliament are moving forward with plans to include vessels in the bloc’s flagship carbon market, meaning the shipping industry will soon have to pay for its environmental impact in the EU.

Also check out EURACTIV’s weekly editions of Digital, Agrifood and Global Briefs, bringing you all the relevant news from our experts.