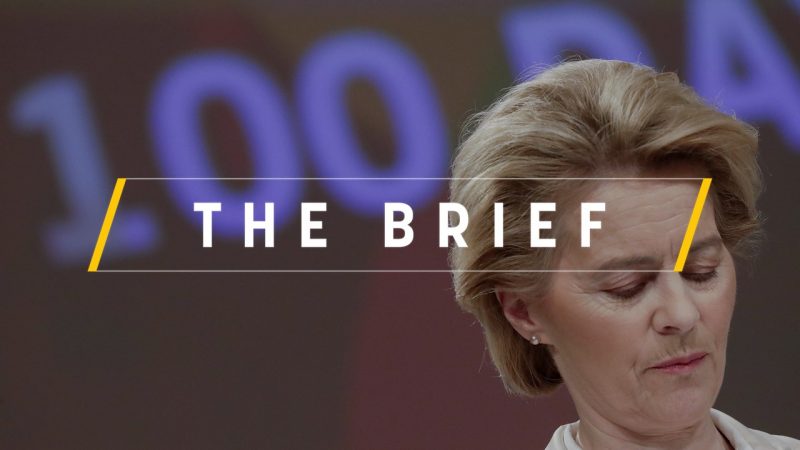 Ursula von der Leyen may have hoped to be an architect during her first 100 days as Commission president. Circumstances however turned her into a firefighter dealing with too many fires at the same time.

In these crisis times, the chief of the EU executive needs to make her voice heard. But she is lacking the gravitas to come up with a European response the bloc continues to miss, in issues ranging from the migrant crisis to the coronavirus outbreak.

“We have made a good start in these first 100 days,” the first female Commission chief told reporters on Monday (9 March).

“Our direction of travel has changed fundamentally”, she added as she outlined her “clear roadmap” to achieve climate and digital goals.

Von der Leyen faced a highly fragmented European Parliament and a disunited Council – a tough political stage to push any of the big outstanding initiatives the EU badly needs, especially things like bolstering the eurozone or building a coherent migration policy.

For that reason, she looked at mid-century, 2050, to deliver strategies to achieve carbon neutrality, to improve our digital infrastructure and to strengthen Europe’s sovereignty.

But the communication blitz fuelled by non-legislative plans, roadmaps and public consultations was busted as soon as the first crisis hit.

The staged arrival of thousands of Syrian refugees at the Greek border and the spread of the coronavirus in Europe put to the test von der Leyen’s cautious approach, which can be explained not only by the divisions she is facing, but also by her own lack of a solid position on major issues.

Asked repeatedly on Monday about how to handle the situation of the asylum seekers awaiting at the Greek border, she said EU borders must be protected and fundamental rights must be guaranteed, including the right to ask for asylum.

She added that “as a principle, excess of force is unacceptable”, after being asked about the use of tear gas and rubber bullets by Greek border police.

But still, she never questioned Greece’s decision to suspend the handling of asylum requests for one month. Moreover, last week she praised the country for being Europe’s ‘shield’.

In regards to the coronavirus, she expressed her satisfaction about the “smooth coordination” among member states and EU institutions to address the COVID-19. But that rosy view hardly squares with the criticism some member states have addressed to France and Germany for blocking the export of protective material.

It was European Council President Charles Michel who took the lead in announcing a last-minute teleconference among EU leaders on Monday.

Even if health policy is primarily a national competence (for now), von der Leyen should have taken a step forward to ensure that the EU approach is safeguarded where needed, and flag areas where it should be reinforced.

A solid pair of hands at the Commission’s helm is needed to steer the block in these turbulent times. But the EU executive continues to act in critical moments as the member states’ secretariat, as the failed negotiations on the EU-s long-term budget showed.

Instead of defending the Commission’s draft, which was closer to the position of a majority of capitals, von der Leyen added technical tweaks to Michel’s plans to satisfy the ‘Frugal four’.

A senior EU official told this brief’s author that von der Leyen has the right goals but needs to improve the implementation.

However, it remains to be seen what is her vision for the future of Europe. The Green Deal and digital transformation were a condition set by Parliament’s political groups. Strengthening Europe’s sovereignty was spelled out in Emmanuel Macron’s Sorbonne speech over twenty times.

These first 100 days were hardly a very good start. Von der Leyen should try harder if she wants to justify her ambition – to represent and lead a Union that strives for more.

EU lawmakers from a range of political groups rose against the decision of European Parliament President David Sassoli to go ahead with the Parliament’s plenary this week despite the high health risks concerning a potential novel coronavirus (COVID-19) spread in the EU institutions.

Thirteen years after a Russian-led polar expedition planted the country’s flag on the Arctic Ocean sea bed directly under the North Pole, Moscow published its 15-year Arctic masterplan, confirming its growing appetite for the polar region.

The Netherlands wrapped up testing on its first foray into hydrogen train technology at the weekend, as the European Commission readies a strategy for the clean fuel that will debut.

A conference in Sofia debated the European Commission’s proposal for an EU-wide rule of law mechanism and one EU lawmaker said there is already a clear majority in the European Parliament to set up a new control mechanism for the rule of law.

One response to “The Brief, powered by APPLiA – Von der Leyen’s lacklustre 100 days”