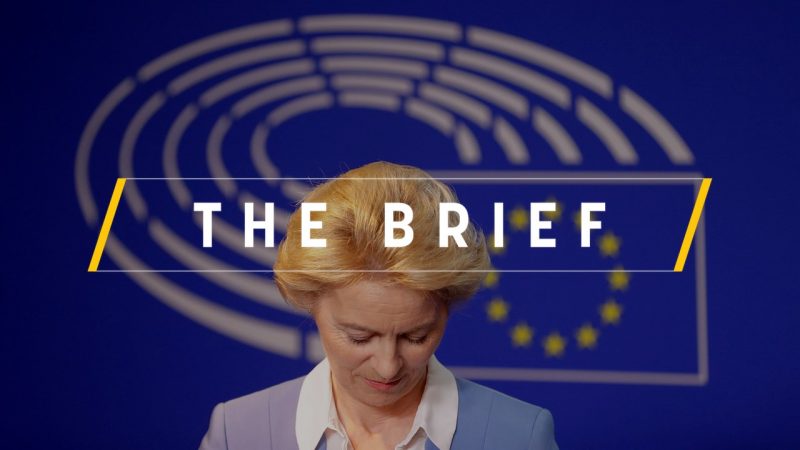 The first question any candidate faces when running for office is why they decided to join the race. The second question is which voters will help them get the job.

She never threw her hat into the ring but was instead picked by national governments. And the backing of the three largest political families in the European Council (EPP, Socialists and Liberals) was supposed to suffice in getting her approval in the European Parliament. And so it was.

Mission accomplished, leaders may have thought yesterday after the nerve-wracking vote.

But if anything, the wafer-thin majority she obtained on Tuesday evening adds a greater sense of urgency to the need to answer the two questions.

Her speech was more consistent that her interventions in the hearings last week. Her human qualities shone with the personal stories she told about her father and the refugee  child she hosted.

But she still needs to articulate a vision about the future of Europe, because her birth credentials (in Brussels) are not enough to provide that.

She doesn’t need a detailed masterplan on her first day in office, but surely, something more than the promise of a ‘united and assertive’ Europe she offered this week and last.

More importantly, she will need to build her platform inside the Parliament to ensure that her proposals see the light of day.

Although the vote in the plenary was secret, von der Leyen would certainly have failed to meet the 374-seat threshold without the votes of populists and eurosceptics from Italy’s Five Star Movement and Poland’s Law and Justice.

The stakes are high. The Parliament has never been so fragmented. A disorderly Brexit may greet her on her first day in office. The negotiations on the EU’s long term budget for 2021-2027 are not progressing well.

Von der Leyen’s first attempt to bring the Socialists, Liberals and Greens under her umbrella irritated her own EPP colleagues, sources said. Her concessions on an unemployment reinsurance scheme, the Social Pillar or Green priorities were not part of the EPP programme, critics said.

Meanwhile, the Socialists celebrated having managed to colour her priorities in red.

As a result, von der Leyen’s guidelines were probably the closest workable reflection of the progressive front that some had dreamed of after the elections.

The numbers practically threw out the “From Macron to Tsipras” front suggested by Frans Timmermans. MEPs from the liberal to the left of the political spectrum control a total of 376 seats, only two above the absolute majority. EPP votes were therefore needed.

Her chances of building this platform will depend on her first initiatives. In her letters to the groups she said that in her first 100 days, she will put into law the carbon neutrality goal by 2050 and a new proposal on artificial intelligence.

Her skills and instincts will be truly tested when she puts forward controversial initiatives, such as a European unemployment reinsurance scheme or the new migration package.

This platform will not be a static bloc, as discipline is far from a given in a Parliament fragmented by party, national, and issue-based loyalties.

But a dynamic alliance of pro-European parties will be essential to support her in steering the European ship through a turbulent period.

Habemus Commission boss! The European Parliament confirmed Ursula von der Leyen by a wafer-thin majority as the new European Commission president, giving her the reins of the EU executive for the next five years.

Find out how EU capitals reacted to the new Commission chief’s election.

There is speculation that the next European Commission will have three vice-presidents, but none of them is from Central and Eastern Europe.

French finance minister Bruno Le Maire is determined to chair an “efficient” meeting with his G7 colleagues. His goal is no less than to refound capitalism. Read our exclusive interview here.

Tensions have escalated between Turkey and two EU member states – Greece and Cyprus. But that hasn’t stopped another EU country, Germany, from continuing to export arms to Ankara.

The involvement of a British tanker in the latest military incident with Iran in the crucial oil shipment choke point has pulled Europe into the fray.

There is a high consensus in Moldova that we want good relations with Brussels and Moscow, but we have no alternative to strong pro-European integration, Moldova’s new foreign minister, Nicu Popescu, told us in an exclusive interview.

Arguably the most crucial EU elections in recent history took place under Romania’s watch. How did it tackle the growing challenge of disinformation, an issue that has already tainted several recent ballots?

Finnish PM Antti Rinne told the European Parliament that his country’s EU presidency would continue negotiations on how to link more closely the disbursement of EU funds with respect for the rule of law in member states.