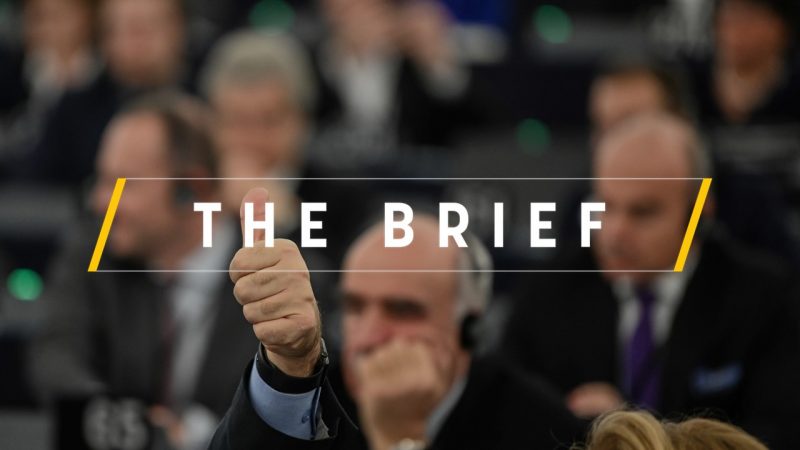 European parties rushed to stake their claim to political fame in the European Parliament on Wednesday, firing off salvos of righteous demands and bold promises that may, or may not, eventually be addressed in the next five years.

Indeed, what better time or place for that than a plenary ahead of the vote on the new von der Leyen Commission? Even if the hemicycle was less than half-full as the next European Commission president presented her vision, and the team tasked with its implementation.

“We must show that we are capable of managing an effective pact on migration and asylum that lives up to our values, builds a new alliance for investment, trade and sustainability and a real Europe of defence open to cooperation”, said Dacian Ciolos, leader of liberal Renew Europe, the brainchild of Emmanuel Macron.

Never mind that we’ve been incapable of addressing migration in a coherent way and that the member states did not exactly go out of their way in the last five years to reach an overarching compromise that would reduce the burden on the southern “frontier states”.

But he also laid out a bold vision that Ursula von der Leyen’s team will accomplish, making sure to stress that it was in no small part thanks to the EPP, whose priorities “are a crucial part” of the new Commission.

“In 2024 Europe will have the most ambitious & inclusive climate policy in the world, a European border & coast guard, transformed Europol into a European FBI, a master plan to fight cancer, created millions of jobs & more.” Hmm. We’ll see about that.

Weber also rushed to take credit for the – almost – gender-balanced Commission, saying again it was thanks to the EPP that the EU executive was chaired by a woman for the first time. Awkward, since though von der Leyen belongs to the conservative family, Weber himself was the EPP’s lead candidate in the European elections…

S&D leader Iratxe García took credit for the most gender-balanced Commission as well, arguing it was the result of the social-democrats pressure. “We will continue to fight for gender equality,” García said, not only on positions but on policies.

The Spanish MEP expects von der Leyen to put an end to gender-based violence with a European directive. As legit and urgent as the claim may be, only 16 out of 28 member states keep records of these cases and 21 have ratified the Istanbul Convention of the Council of Europe to fight this horrific crime.

The S&D praised their members of the new EU executive, in particular, Frans Timmermans and Josep Borrell as if they were still representing the interest of their political family once in office.

It is odd to see the MEPs trying to get some credit for the decisions made during a process they were broadly excluded from.

Talking about political families excluded, all those who blindly supported this Commission have a representative at the college. It was not the case for the Greens, however.

Greens/EFA co-chair Ska Keller wondered how the EU can have an ambitious climate policy without reforming the Common Agriculture package or trade; how Thierry Breton – a businessman from the digital sector – can be in charge of the Single Market or how a Hungarian Commissioner can be the one responsible for telling others how to reinforce their rule of law…

As Greens seemed to have more questions than answers, they mostly abstained. The benefit of neutrality is that if it goes right, you did not oppose it, and it goes wrong, you did not support it.

“We have a problem. Today and in previous months, you have promised everything,” said GUE/NGL co-chair Martin Schirdewan. And if I may add, to everyone. “How are you going to implement your plans if you still support austerity policies?” wandered the German MEP.

Von der Leyen acknowledged during her speech massive investment was needed to accomplish her ambitious agenda. But in the eyes of the EU’s Stability and Growth Pact, public investment is mostly public debt.

Well, hold your horses because this obvious need for money comes in the middle of a spat between the outgoing Commission and the member states – particularly a few of them – on whether it is so necessary to further contribute to the EU’s budget.

Questioned by EURACTIV, von der Leyen admitted she stands by the 2018 EU blueprint proposal. MEPs do not consider this pot enough to fund both the traditional and new priorities, let alone the newly elected EU chief executive’s plans…

Von der Leyen arrived at the Commission helm by promising and conceding as much as possible to the main political groups to secure their support. Plus, she was elected by the Council, which makes her dependent on the capitals as well.

After the vote, von der Leyen told the press she felt “happy” and “humble” by the “overwhelming majority” she secured at the Parliament. “I consider it as a vote of confidence,” she added.

For some, today’s vote was indeed an leap of faith. And von der Leyen knows it.

To figure out whether the first female Commission president will ever live up to the expectations, you will have to keep an eye on the Berlaymont for the next five years. Or as spokesman-turned-Commissioner Margaritis Schinas would say, ‘stay tuned’.

A message from BP: 40% of consumers surveyed by SYSTRA say a lack of charging points is a barrier to switching to an electric vehicle. Find out what the other barriers are and, crucially, how together we can remove them in this new independent transport research report, commissioned by BP.

The European Parliament gave the green light to Ursula von der Leyen’s college of Commissioners “for a fresh start for Europe” with a comfortable 461 votes in favour, 151 against and 89 abstentions.

Disagreement on the inclusion of nuclear power in the EU’s upcoming green finance taxonomy has revived long-standing divisions between France and Germany over the energy transition.

Outgoing EU Commission President Jean-Claude Juncker noted that the French army is alone when defending Europe’s honour and security in Mali, in a fairly direct message to Germany.

The EU urgently needs to adopt an “aggressive” industrial strategy to protect its aluminum sector, which has been under unfair pressure from both the US and China, Greek MEP Anna-Michelle Asimakopoulou told EURACTIV.com.

The EU continues to lag behind in terms of ‘green’ investment compared with China and the US, the EIB warned.

Temperatures can be expected to rise by 3.2C this century under current national pledges, threatening to bring “wide-ranging and destructive climate impacts,” international climate experts warned.

Tens of thousands of farmers protested in Berlin against the government’s new agricultural policy.