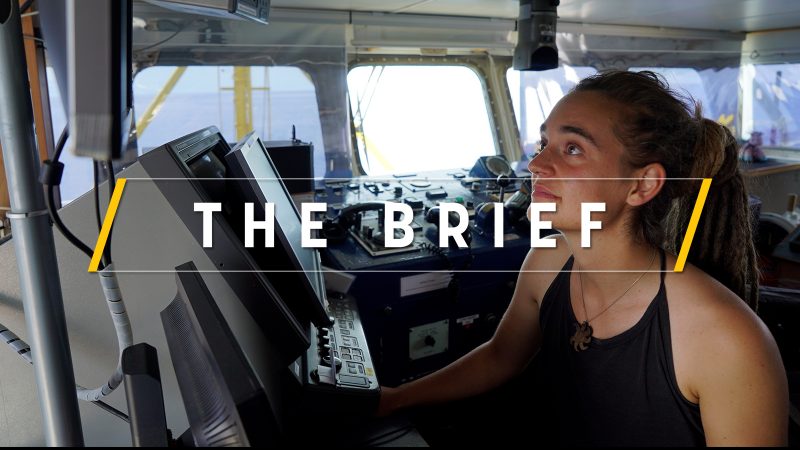 Remember U.S. Defense Secretary Donald Rumsfeld? In 2003, he created a huge row in Europe by dividing the continent between ‘old’ and ‘new Europe’. Today we want to twist his words and talk about ‘real Europe’.

While European leaders were busy in Osaka trying to find a consensus – behind closed doors – on who would get Europe’s top jobs, a real harbour drama took place in Lampedusa, Italy.

Carola Rackete, the German captain of the ‘Sea-Watch 3’, a migrant-rescuing ship, saw it as her moral duty to bring 40 refugees ashore in Italy. For the Italian government, the 31-year old captain violated the country’s laws and she now faces ten years in prison for forcibly mooring in the port of Lampedusa.

Germany and France have strongly criticised the Italian government for arresting Rackete. “I would expect a country like Italy to handle such a case differently”, Germany’s President Frank-Walter Steinmeier said on Sunday.

“Someone who saves lives cannot be a criminal,” Foreign Minister Heiko Maas said, adding that saving lives is a “humanitarian obligation”, which must not be criminalised and called on the Italian judiciary to quickly drop the case.

That’s on the political side. In Germany and in Italy, concerned Europeans not only expressed their strong disapproval but also took action. German TV presenter Jan Böhmermann and his colleague Klaas Heufer-Umlauf launched a solidarity campaign on YouTube with an appeal for donations because, as the latter said:

“We are convinced that those who save human lives are not criminals, they cannot be criminals. Whoever uses his life to save the lives of others will never be a criminal, nowhere in the world and certainly not in a friendly, free, democratic and people-based Europe. Anyone who claims the opposite is not right, he is simply not right”.

As it is, their appeal for donations brought in more than €735,000, which adds to the €410,000 collected in Italy via another collection campaign. More than 26,000 people gave money for the sea rescue and more than €1 million have been raised through the fundraising campaigns.

According to “Sea Watch” spokesman Ruben Neugebauer, the money will be used to pay for the court costs and for eventually buying a new ship – the Italian government has confiscated the “Sea-Watch 3”, with penalties of up to €50,000 for unauthorised entry. Should the ship remain seized, Sea Watch will need a new one, Neugebauer explained.

To sum it up, an NGO, a 31-year old captain and some 26,000 concerned Europeans put the finger where the real scandal is: the lack of solidarity between member states, incapable of agreeing on a distribution mechanism for refugees in Europe.

At a time when hundreds are drowning in the Mediterranean, at the door of Europe. And member states are silent.

What a night. After almost 24 hours (counting the flurry of pre-summit meetings on Sunday), EU leaders failed to agree on the division of EU top jobs. Check out our Live Blog for blow-by-blow updates, resuming around 10 am on Tuesday.

Romania and Estonia have requested the replacement of their commissioners who were elected as MEPs and have taken their seats. To avoid that, Commission President Jean-Claude Juncker has put forward a legislative proposal, EURACTIV has learned.

Morocco has moved closer to its goal of obtaining a ‘privileged relationship with the EU’ following successful talks between Foreign Minister Nasser Bourita and the EU’s foreign affairs chief Federica Mogherini.

A recent report by Open Society European Policy Institute suggests Brussels should revamp the handling of the enlargement process, with a new directorate that would only deal with EU hopefuls.

Ministers from China, Canada and the EU met for a third annual climate summit in Brussels on Friday, in a format meant to demonstrate that the world continues the climate fight even if America is retreating.

Paris clamps down on older diesel cars. Record-breaking temperatures recorded in France last week may have fizzled but the cars that were banned from Paris during the heatwave will remain off the road under new measures to banish smog.

Vaccines – victims of their own success? One of the reasons behind the decline in vaccine confidence is that people have become complacent, as diseases that have killed millions of people are no longer here due to the success of vaccination, an epidemiologist told EURACTIV.

In an interview with EURACTIV Germany, the founder of consultancy firm Unlearn spoke about the widening gap between rich and poor in Europe, the rise of nationalism and whether social cohesion is crumbling.

The EU summit resumes at 11am on Tuesday morning, with EU28 having another go at top jobs distribution.

One response to “The Brief – Real Europe”