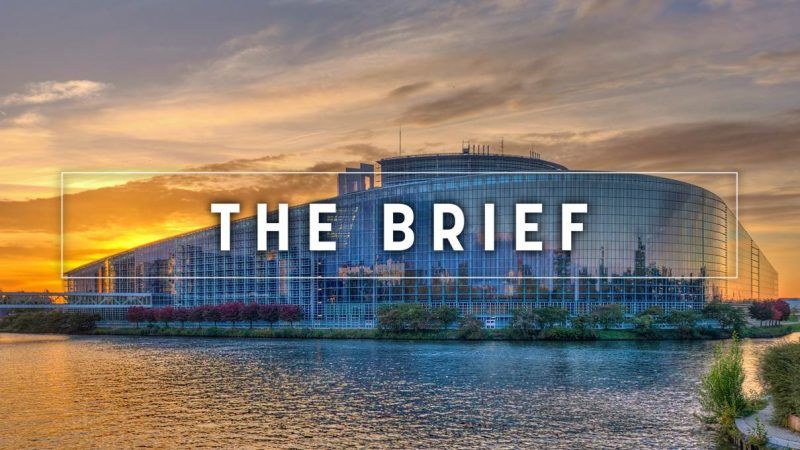 Many of you reading today’s Brief will be sat in Strasbourg, perhaps enjoying a Flammkuche with a cool Kronenbourg. But make the most of it because the monthly jaunt to the Alsace capital could be coming to an end.

Hauling the European Parliament once a month (twice this October!) to Strasbourg could have been a prominent anti-EU argument in the Brexit campaign, if the Leave camp hadn’t been distracted by banging the anti-migration and outdated-sovereignty drum.

It’s a huge expense for taxpayers (€3,600 per minute), wastes time that should be better spent by MEPs on actually making decisions and, despite the introduction of the high-speed link, creates a carbon footprint totally out of touch with today’s, literal and figurative, climate.

But worry not, fellow single-seat-supporters: our judicial paladins at the European Court of Justice have ridden to our aid, deciding today that the Parliament was within its rights in 2016 to adopt a new budget in Brussels, despite the rules saying it should be done in Strasbourg.

France and Luxembourg filed the case on the grounds that the EU treaty says 12 monthly sessions and the annual budget session should be held in Strasbourg. But because of time constraints and the need to be fully transparent, MEPs ended up adopting 2017’s budget in Brussels.

That would have opened up a ridiculous Pandora’s Box of transparency concerns, as the way the EU is funded would essentially have been decided for 2017 behind closed doors.

At a time when the EU’s very purpose is under scrutiny and nationalists leap upon any shortcoming to increase their standing ahead of next year’s elections, can you imagine the amount of fuel that would’ve thrown on the fire?

And for what? So France can preserve some anachronistic feeling of Franco-German reconciliation that excludes the rest of us? It isn’t 1957 anymore and the EU needs to make its current members, old and new, all feel equal members of the club.

But what about all the cash the plenary sessions bring to Strasbourg’s local economy, you ask? Fair point. That’s why the relocation of two EU agencies from London (cheers, Brexit) was a prime chance to offer up France a sweet deal.

One four-day-long injection of money a month or 365-days of regular employment and spending by hundreds of well-off EU officials? Unfortunately, the selection process bodged that in more ways than one.

There may be two chances for the EU to put this issue to bed though and the first is Emmanuel Macron’s drive for eurozone reform, which has admittedly stalled a bit this year.

Giving the French president the most ambitious parts of his wish-list will mean opening up the EU treaties, and there’s the magic moment for him to use it as a bargaining chip. We could even end up with Strasbourg as the seat of the eurozone’s own parliament…

The second chance? Well, the Brussels Parliament is due for either a rebuild or mass renovation, both of which will cost upwards of €300 million, as it is nearing the end of its “life-cycle”.

That might mean relocating Parliament staff on a temporary basis for the duration of the works, which could last a significant amount of time. We’ll see how keen Strasbourg is to hold onto the seat when the city has to deal with 751 MEPs and all their staff on a 24/7 basis…

A post-Macedonia-referendum funk lies heavy over Europe. NATO’s door is open for Macedonia only if it implements the name deal with Greece, says the Alliance’s chief, putting pressure on Skopje. Meanwhile, Moscow slammed Macedonia over its allegedly ‘forced’ vote.

Britain’s post-Brexit immigration rules will treat EU citizens the same as their non-EU counterparts, UK’s PM Theresa May confirmed. May becomes the first PM in nearly 30 years not to accept an interview at her party conference by British TV’s Channel 4.

For lovers of dark humour, the possible Festival of Brexit line-up could maybe cheer you up.

Meanwhile, Finnish Ironman Alexander Stubb announced his bid for the Commission throne today. Is he the new Macron?

The public transport strike left some Bruxelloise unnerved. Maybe it is time for the Belgian capital to take over some creative ideas from fellow capitals to make commuters happy. Denmark will ban petrol and diesel sales by 2030 to ease air pollution concerns.

Good news for the press: EU finance ministers reached an agreement to allow willing member states to apply reduced VAT rates or even scrap taxes on electronic books and digital press. MEPs also voted for more European TV on our screens, backing plans to ensure that at least 30% of content provided by online media platforms is European.

The Commission has given up plans to ramp up Europe’s 40% emissions reduction goal for 2030 to 45%. But the EU executive insists that a formal increase was never on the table ahead of COP24, where Europe hopes to exert its leadership credentials.

Happy to brief you about the differences between the EU and USSR, said Lithuania’s EU Commissioner Vytenis Andriukaitis in a scathing response to UK foreign affairs chief Jeremy Hunt.

The Cold War rhetoric has returned for good as Washington’s envoy to NATO indicated the US would be ready to ‘take out’ banned Russian warheads if necessary. Amid the current tensions, look out for NATO’s defence ministers meeting in Brussels during the next two days.