The Brief, sponsored by Danfoss – Sound of silence 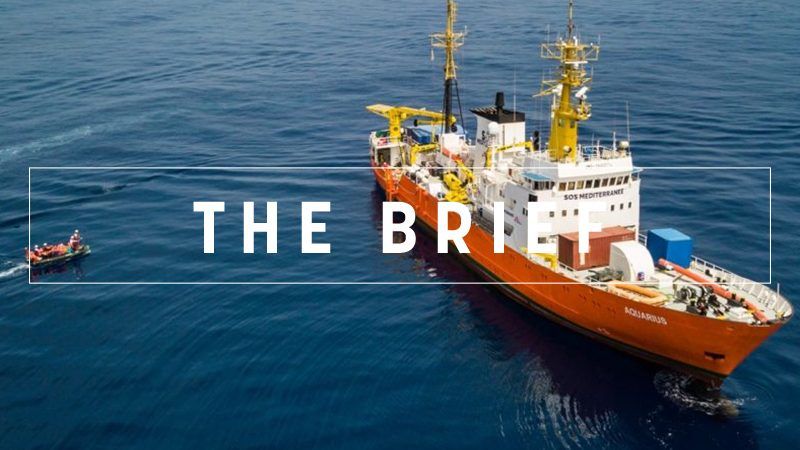 Emmanuel Macron and Angela Merkel will be meeting in Marseille late this afternoon, but neither Paris nor Berlin wanted to disclose what will be on the menu – a silence that is louder than words.

The venue of the meeting, the Palais du Pharo, is an imposing palace built in 1858 to meet the imperial needs of Napoleon III.

The choice of the location showcases – yet again – the difference in style between Paris and Berlin.

The flamboyant French leader does not hesitate to use the wings of the Versailles Castle to promote his own stature as president of all the “citoyens francais”, and the Lutheran-shaped – to use Macron’s recent wording – state of mind of the German chancellor.

The palace overlooks the Mediterranean Sea. And as the two head of states will enjoy this indeed amazing view and the wide horizon, they will also be able to see the French rescue vessel Aquarius moored in the port of Marseilles, a ship that has become the symbol of Europe’s failed migration politics.

As such, it does not take much of a crystal ball to assume that migration will be a hot topic. And all the ripple effects it implies.

Next week’s vote in the European Parliament on whether or not to trigger punitive Article 7 measures against Hungary will most certainly be discussed after Manfred Weber of CSU, the sister party of Merkel’s CDU, announced he is now officially running for the European Commission presidency.

Macron took a rare public dig at Merkel this week by questioning her party’s ties with Hungary’s right-wing leader Viktor Orbán, while directly telling Weber that he can’t support Merkel and Orbán at the same time.

While Macron did not hesitate to throw the gauntlet at Orbán and Salvini, the EPP has resisted calls to expel his Fidesz party or support the move to sanction Budapest.

The EPP and Merkel say it is vital to maintain links and dialogue with the Hungarians.

One thing is already clear: the EPP cannot hope for Macron’s support because the EPP belongs to Orbán. Or at least it has failed to distance itself from his illiberal policies.

“We have been too slow, too ready to compromise,” Macron said. “We have to be much tougher on these issues.”

But there is more to the story than the typical Brussels bubble talk. A silenced story with a strong Bavarian setting.

On 14 October, the eyes of all political aficionados will be on the outcome of the Bavarian regional election. Polls indicate that the CSU will no longer get the majority it is so desperately striving for.

Depending on the results, it will instead have to choose between a coalition with the Liberals of the FDP and the Freie Wähler, a communal version of the CSU.

Should the CSU be dealt an electoral blow, the chances of Weber positioning himself as the  EPP’s Spitzenkandidat sink like a stone. How could Merkel support a candidate from a party that has become politically weak in its own stronghold?

Should the Bavarian conservative party, against all odds, emerge as a winner, the road towards the EPP congress on 8 November will be laid open to him, with Merkel’s blessing in tow.

An opportunity that shall not be missed

Increased transparency in the drinking water sector will drive investments to reduce energy consumption and water leakage. The Drinking Water Directive must set clear objectives to increase energy efficiency. There is potential to make the entire water cycle energy neutral. Learn more about this opportunity that shall not be missed.

Manfred Weber isn’t making many friends with his bid to take the Commission throne. His candidacy is “absurd” given his political party’s close links to Vladimir Putin Hungary’s Viktor Orbán, says leftist chief Gabriele Zimmer, while Greens MEP Ska Keller said his openness to the far right is “quite crazy”.

Former Eurogroup boss and southern Europe’s favourite Dutchman Jeroen Dijsselbloem admits he joined Macron’s movement all the way back in 2016. Could he be the French president’s ideal candidate to throw into the big race next year?

The latest round of Kosovo-Serbia talks collapsed as tensions mount again. The two countries will need a wide consensus to resolve their conflict, this expert explains.

We are ready to welcome you as a member, NATO’s chief told Macedonia. Meanwhile, France cries “strategic autonomy” and says it must use fewer US parts in its weapons systems.

The EU admitted that anti-money laundering rules are inefficient in monitoring financial flows and prepares for improved supervision and enforcement of its legislation.

Electric cars are in a bit of a ‘chicken and egg’ situation at the moment: are there not enough chargers because there aren’t enough cars to use them? Or is it a case of vice-versa? We break it open here.

Good news of the day: Twitter bans Alex Jones and InfoWars over abusive behavior. Could Twitter dump Trump as well?

A jam-packed Strasbourg session. The highlight will be Juncker’s final State of the Union address to this Parliament. The Article 7 vote on Hungary is also one to watch. EURACTIV’s Sam Morgan, Beatriz Rios and Jorge Valero will be there to bring you all the news throughout the week.