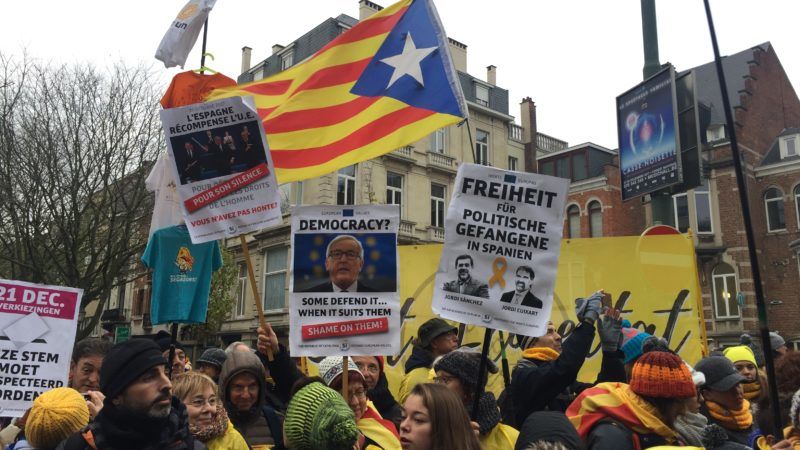 At least 45.000 demonstrators came from Catalonia to Brussels to demand Europe to intervene in the Catalan crisis and request the release of their leaders still in prison. [Jorge Valero]

Thousands of Catalans took the streets of Brussels on Thursday (7 December) to support their ousted leader Carles Puigdemont and demand the release of other Catalan leaders who remain in prison.

According to the organisers, at least 60.000 people took part in the protest across the European quarters in Brussels. The police, who estimated at least 45.000 demonstrators, restricted access to the EU institutions.

The peaceful protesters, most of them carrying the pro-independence flag Estelada,  chanted “Freedom for the prisoners” and “Where is Europe?”, as they passed by the European Commission’s Berlaymont building.

They also shouted “Puigdemont president” to Marta Rovira and Gabriel Rufián, members of the other pro-independence party ERC, which has refused to join Puigdemont’s list for the upcoming snap elections in Catalonia on 21 December.

“We came to give the response to Europe, we don’t expect any response from the European side”, Rovira told reporters.

“We want to show how to exercise democracy in the heart of Europe, with respect, with tolerance. We believe this is also the way to build Europe”, she added.

Oriol Junqueras, the leader of ERC who was the vice-president in the Catalan government, remains in prison. Meanwhile, Puigdemont’s extradition order initially issued by Spanish authorities was withdrawn this week. The former president also attended the demonstration.

Both men are fighting to become the strongest figure within the secessionist camp.  Although Junqueras’ ERC is leading in the polls (with support around 20%), the demonstration served to show that the Catalans still prefer Puigdemont as president.

Still, ‘Ciudadanos’ (a liberal party against breaking away from Spain) may come first in the elections, according to a poll published on Monday by the Centre for Sociological Research, a Spanish public institution. 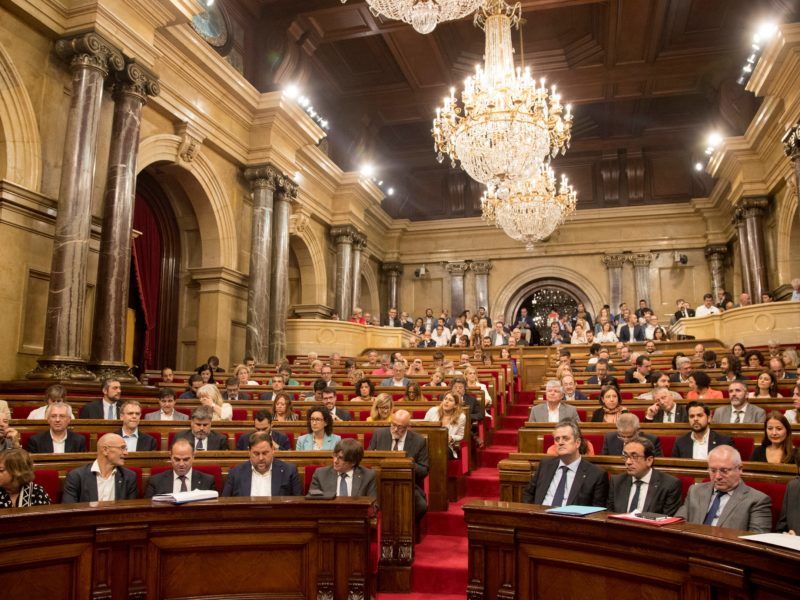 The dismissed government and the leaders of the Parliament face various charges, including rebellion and sedition, after they unilaterally proclaimed an independent republic of Catalonia on 27 October.

Demonstrators requested Spain’s central government to respect the results of the vote, seen by Prime Minister Mariano Rajoy as a solution to end the so-called procés, Catalonia’s independence bid.

The colourful march also included various groups of ‘castells’ who built their human towers as protesters gathered in Parc du Cinquantenaire to begin their march.