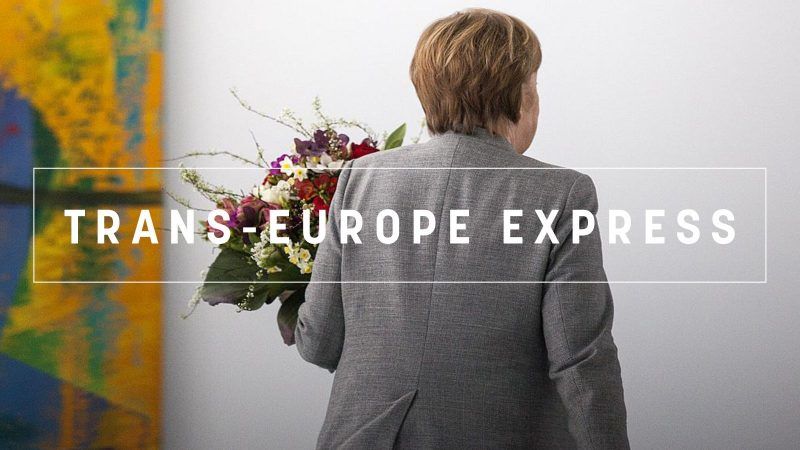 The Trans-Europe Express is EURACTIV's weekly roundup of news from across Europe. [EPA/OMER MESSINGER]

Rarely has a national party convention been followed so eagerly in Brussels corridors. As Germany’s CDU party is set to vote this afternoon on Chancellor Angela Merkel’s successor at the party helm, thoughts are already on the future.

The 1001 party delegates will choose between CDU general secretary Annegret Kramp-Karrenbauer (known as AKK), millionaire businessman Friedrich Merz and current Health Minister Jens Spahn. All of them have thrown their hat in the ring in the not so secret hope that a victory today may very well lead to a much-desired job in the German Chancellery.

In 2000, Merkel took the helm of the party as a dark horse to become Chancellor only five years later, and has remained in office for the next 18 years. A relentless CDU shift towards the centre began: abandoning military conscription, Germany’s exit from nuclear power, benefits for fathers to look after their children, and Merkel’s silent consent for the introduction of gay marriage.

But somewhere along that way, she seemed to have lost the core of her conservative party.

Powerful conservatives now see the moment to take back control. On national level, the questions are clear: Does the CDU want to find its way back to its conservative, Christian roots? Where will it position itself, between right-wing populists and a resurgent Green wave?

The outgoing boss has kept a low profile on her preferred outcome. But when she made Kramp-Karrenbauer party secretary general, it may have already been an indication of her personal choice.

Merkel’s crown princess has been leading the polls in recent weeks. She has 18 years of experience in the domestic political treadmill, having been prime minister of Saarland between 2011 and 2018 and held pretty much every ministerial post Saarland had to offer.

However, AKK faces a dilemma: on the one hand, she has to make a name for herself, against the other candidates, but also against the Chancellor. Should she be elected, it would be a certain commitment by the party to continue Merkel’s progressive centre-right policies.

Like Merkel, she sees “Europe at the heart of the CDU”, calling for more cooperation among member states, and on Emmanuel Macron’s European army demands. But she sees no added value in a common eurozone budget, as she wrote on her blog. In terms of the future of Europe, Kramp-Karrenbauer is likely to be a mini-Merkel.

But her victory cannot be taken for granted.

Unlike her, Merz and Spahn make no secret that they want to move the party to the right. Both want to bring back what the CDU once stood for: law and order, security, Heimat, Leitkultur, economic competence – demands that could bring back the many voters who have fled to the far-right AfD.

But Spahn has become an outsider in recent weeks and his chances to take the helm of the party are small.

Merz, however, could prove to be the dark horse. His political career was derailed more than ten years ago by Merkel – it would be a perfect revenge.

He stands for a much more conservative CDU and many hope that he will provide leadership that could restore the CDU to its power of assertiveness. But he might also meet resistance within the moderate party ranks.

Merz’s long career in global business, which included a place on the board of investment firms like Black Rock and HSBC, recently brought him some criticism due to their suspicion of financial wrongdoing.

For the EU, he is not a blank slate as he was an MEP for one legislative term.

Before announcing his candidacy in 2018, he co-signed a European manifesto calling for a common European army, more power for the EU Parliament in Brussels, but also “solidarity and fight against nationalism and selfishness on the inside and for unity, common sovereignty on the outside”.

Since then, he has been mostly silent about European politics.

Whoever wins, they will have large shoes to fill in, particularly if they go on to become the leader of the EU’s strongest economy and have to face-off their European colleagues on major European challenges.

Brexit extensions. UK’s Theresa May rejected calls to delay a vote by MPs on her Brexit deal but left open the possibility to give lawmakers a vote on whether to enter into the Northern Ireland backstop.

Tax plans. France has failed to unblock EU tax proposals on financial and digital transactions, two measures for fiscal justice that Paris has attempted to push for a long time at European level.

Political mayhem. In an almost surreal sequence of events, the Romanian government paid a visit to the European Commission to discuss the country’s upcoming EU presidency, while crumbling at home.

Government crumble? The future of Belgium’s coalition government has come under threat after Prime Minister Charles Michel said he would sign the UN Global Migration Compact