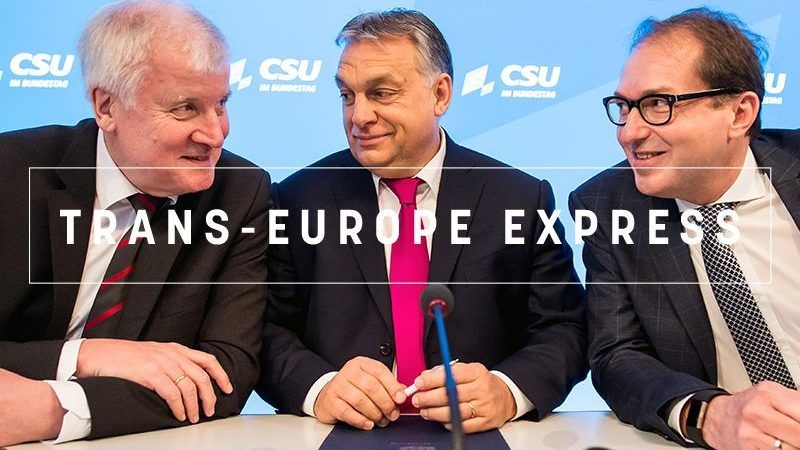 Trans-Europe Express is EURACTIV's weekly roundup from across the continent.

Years have passed and he showed true staying power as the tide turned. Orbán’s ideas remained unbreakable while the political correctness is put into question. These days, more and more EU leaders imitate Orbán, who is not only becoming mainstream but appears to be the only visionary in Europe.

Orbán wanted camps for migrants outside the EU? In the EPP, this idea is becoming mainstream.

Orban wanted to deport all illegal migrants? This is in the programme of the new Italian government, and very likely in the electoral platforms of political forces across Europe.

Germany’s CSU leaders and Austria’s Prime Minister Sebastian Kurz are true fans of Orban, who is not shy of extending public support to his allies in Slovenia and Macedonia in the manner of a true political patron.

Orbán pushed back the migrants? The Commission has stopped saying that pushbacks are illegal and keeps its eyes wide shut when refugees are stopped and sent back by Libyan or Tunisian coastguards, sponsored by EU governments.

In April 2012, Orban told a public event in Brussels his country was a “laboratory for Europe”, suggesting that what today appears controversial in Hungary, would tomorrow become the norm for the rest of the EU.

This website asked Orban then whether he was suggesting that Europe should be “Orbanised”.  In his answer, he referred to his long history as a politician. (Today’s ‘Viktator’ was a youth anti-Communist leader and the founder of a centre-right political force.)

With hindsight, this answer appears visionary.

After Angela Merkel, Orbán is the longest-serving EU prime minister, with the second largest number of EU summits attended (10 less than the German Chancellor).

But unlike Merkel, he is likely to stay at the helm much longer – he’s making plans for another 20 years. Orban knows how to be re-elected.  If at some point some believed that he was a burden to the EPP, now many see that he is in fact a big asset.

This edition of Trans-Europe Express is co-financed by the European Parliament.

Friends rather than foes. Despite an anti-German campaign run by Poland’s ruling party, Polish people’s attitude towards Germans and the German view of Poles have not become more hostile.

Romanian theatre of absurd: The ruling political party, whose leaders has sacked two prime ministers in the past 18 months, is staging a massive protest in front of the government building in Bucharest on Saturday.

Name solution. Macedonia expects growing “external resistance” as negotiations on the name dispute with Greece get closer to a final deal, which would unblock the country’s NATO and EU membership bid. While Hungarian Prime Minister, Viktor Orban tried throw a spanner in the works.

Pacifying time extensions. According to a new proposal aimed at avoiding a hard border between Northern Ireland and the Republic, the UK plans to remain in the EU’s customs union until December 2021.

The cow that went viral. The case of Penka, a cow that galloped across the border from Bulgaria to Serbia and may now have to be killed, has grabbed the attention of the media.

Coal exit. After a long wait, Germany’s government has appointed the long-awaited commission which is to define a roadmap for the country’s coal phase-out.

Too much Shakespeare. The growing popularity of English as a medium of instruction at Dutch universities is ringing alarm bells among local lecturers and students.

Peace and progress. Normalising relations between Kosovo and Serbia is “the most complicated process in the Balkans at the moment”, according to the EU’s envoy in Kosovo.

What a waste. Despite progress in recent years, local circular economy efforts in the Czech Republic, Hungary, Poland and Slovakia are still plagued by bad management, cheap landfilling and problematic reporting.